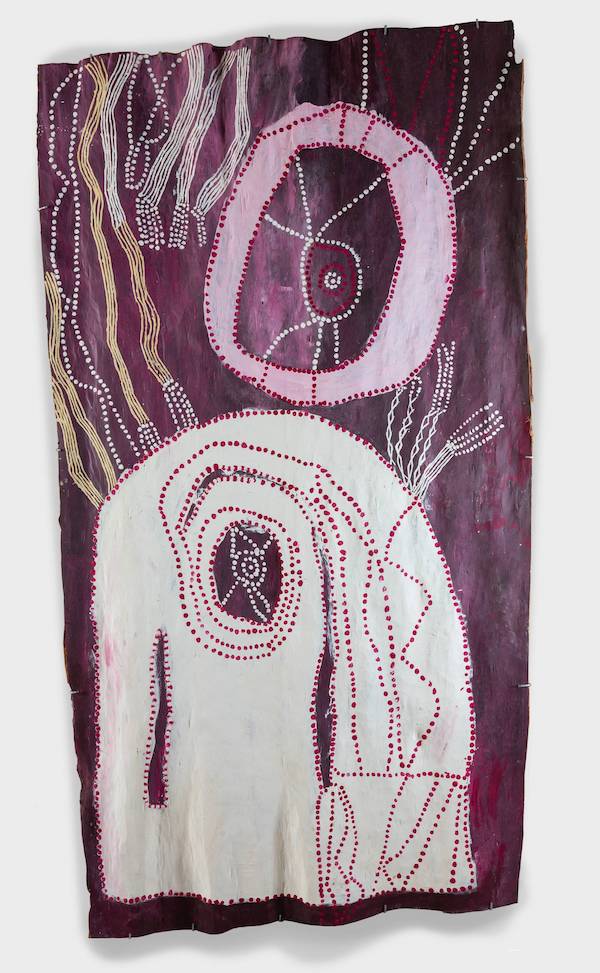 Highly respected senior Yolngu artist and elder Nonggirrnga Marawili has added an impressive new notch to her belt, with her 2020 bark painting Baratjala recently acquired by the Tate Modern, London, and the Museum of Contemporary Art, Sydney.

The acquisition was made possible through the International Joint Acquisition Program for contemporary Australian art between the two prominent art institutions, which has seen 35 works collaboratively acquired in recent years. The program came about as a result of a $2.75 million corporate gift from the Qantas Foundation in 2015.

Regarded as one of the most important contemporary Australian artists, Marawili’s bold and highly sophisticated artworks reflect an innate understanding of culture, history, and the environment. Using natural materials combined with a striking use of pink ink from recycled print toner cartridges, Marawili’s practice alludes to her strong cultural and familial ties, whilst simultaneously revealing her own visceral experience and knowledge of the land and stories of north-east Arnhem Land.

Baratjala depicts one of Marawili’s enduring subjects: a story connected to an important coastal site on her Madarrpa clan estate, where crashing waves and lightning meet the resolute mass of enormous, partially submerged boulders. The work demonstrates the significant relationship between land, sea and sky in Yolŋu life.

The jointly acquired artwork will go on display for the first time at Tate Modern as part of its expanded re-installation of the acclaimed collection exhibition A Year in Art: Australia 1992, on view until 14 May 2023. This presentation explores Aboriginal and Torres Strait Islander peoples’ relationship to Country, as well as colonisation’s ongoing impact on issues of representation, social injustice, and climate emergency.

This latest accolade follows many recent career highlights for Marawili. In 2021, the artist was short-listed for the 38th Telstra NATSIA Awards, as well as being announced as a finalist in both the $100,000 Hadley’s Art Prize in Hobart, Tasmania, and the Wynne Prize at the Art Gallery of New South Wales, Sydney.

Marawili’s works were included in a major landmark exhibition presented by the National Gallery of Australia entitled Know My Name: Australian Women Artists 1900 to Now, and in an exhibition at the ARTIZON Museum in Tokyo, Japan entitled STEPS AHEAD. In addition to presenting a sell-out solo exhibition at Alcaston Gallery titled ḎÄL – Resilience, Marawili was also included in the exhibition Bark Ladies at NGV International in Melbourne, a landmark exhibition celebrating the NGV’s extraordinary collection of bark paintings and larrakitj (painted hollow poles) by women artists working out of the Yolngu-run art centre, Buku Larrngay Mulka Centre (Buku).