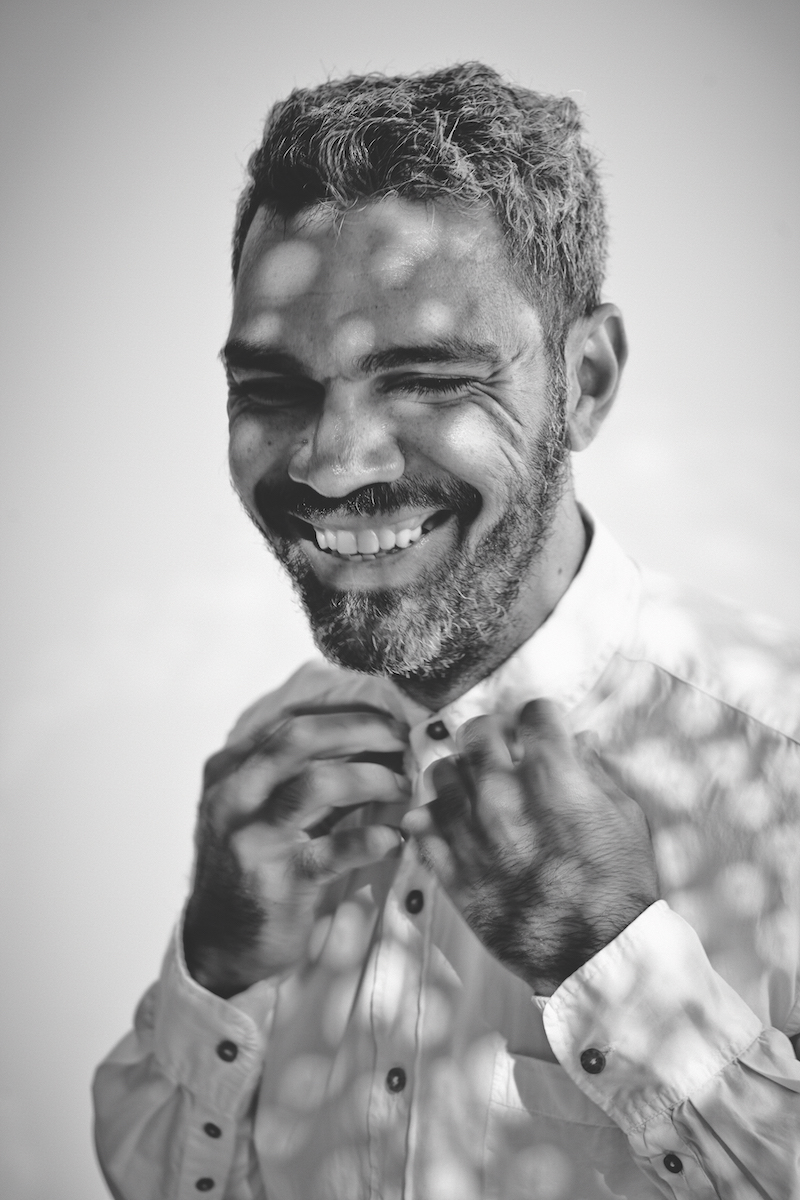 Daniel Boyd has achieved international acclaim for his practice, which reframes Australia’s foundational myths as an ongoing history of Aboriginal survival and resistance.

Daniel Boyd is testament to an expanding field of artists working to create a more self-aware set of cultural relations in Australia that celebrates the nuance, potency and urgency of Indigenous practitioners and their histories. A Kudjla/Gangalu man from North Queensland, Sydney-based Boyd has achieved international acclaim for his practice that reframes Australia’s foundational myths as an ongoing history of Aboriginal survival and resistance. What concerns and obsesses him is the injustice meted by Australian settlers and the glorification of this history in visual art.

After graduating from the Canberra School of Art in 2005, Boyd exhibited a series of paintings that shifted the landscape of Australian Art History and history painting. Using Western canonical history paintings as inspiration, he reimagined Captain Cook and colonial explorers as pirates and murderers, using eye-patches and the occasional parrot as signifiers of their criminality in dispossessing Indigenous people of their land. Inscribed beneath each portrait is the expression “no beard”, alluding to accounts that Indigenous Australians first thought Captain Cook and his explorers were women as they had no facial hair.

Boyd would continue surveying colonial images and mythologies, eventually applying his understanding of particle theory — a theory that notes that all matter and objects consist of small particles that are in constant motion, vibrating with energy — to his practice around 2012. Utilising predominantly found colonial images – often drawn from Museum collections, including the British Museum and the Natural History Museum in London, Boyd would reconstruct these archival images using a field of acrylic pointillist dots painted against dark backgrounds.

These dots, a reference to Modernist painting techniques and Western Desert painting traditions, were partial splices of imagery that require viewers to step back and decode the larger image held depicted within the cosmos of paint. By engaging in the mechanics of seeing, Boyd alludes to the fragmentary nature of knowledge and history — highlighting how Aboriginal people exist in their dark spaces. The work asks audiences to slow their pace of looking, ponder each image and reflect on Australia’s colonial settler history and the ongoing effects of the terra nullius legal doctrine that disavowed Aboriginal people of their land and personhood.

Boyd has since deepened his practice by developing new paintings, video works and installations for a number of high-profile exhibitions, including Where The Oceans Meet at the Museum of Art and Design (2019) curated by Hans Ulrich Obrist, All the World’s Futures, 56th Venice Biennale (2015) curated by Okwui Enwezor, Kochi-Muziris Biennale: Whorled Explorations in India (2015) curated by Indian artist Jitish Kallat and David Elliott’s Moscow International Biennale for Young Arts: A Time for Dreams (2014). In each exhibition, Boyd demonstrated fiercely interrogative journeys into the mouth of history in search of human pain, labour and stoicism against the nefarious forces of colonial relations and histories. The result were powerful statements of colonial legacies and its lasting impact on Indigenous and people of colour around the world.

Boyd’s forthcoming exhibition AND THE HORIZON SWALLOWED THE TORTOISE at Roslyn Oxley9 Gallery in Sydney continues this trajectory by uniting three highly personal subject matters. In an ode to his mother, Boyd has painted sunsets that recall a sentimental, secluded beach near his childhood home in Cairns, Queensland. Unable to travel and visit his mother during the COVID-19 lockdown, these brooding scenes beat with the longing of family to be reunited. The beach is an important familial reference point for Boyd, whose grandfather settled on a beach after being expelled, among others, from his Anglican Mission following an uprising. The exhibition also includes depictions of the Australian native Bush Stone-curlew, a bird known for its ominous shriek. Found across most of Australia, these nocturnal birds carry associations of death in many Aboriginal Australian cultures – a haunting reference to the time of COVID-19. The exhibition also touches upon Greek mythology, taking inspiration from Achilles’ paradox – one of many philosophical problems described by the pre-Socratic Greek philosopher Zeno of Elea. While his paradox has been rebutted and purported to have been solved by theorists and mathematicians, Boyd’s interest lies in the theory’s application to assess the risk of infectious diseases without detailed datasets.

Boyd notes that these works emerge from the unique conditions of lockdown. Social distancing is pre-pandemic for those people who are exiled, marginalised or displaced. These communities, of which many Aboriginal people belong to, have historically had to communicate with loved ones far away, while enduring feelings of isolation, uncertainty, depression and trauma under the watchful eye of the state. While the pandemic represents death, it is also tied to feelings of estrangement. It is this estrangement that is suffused in this latest body of work. Boyd notes, “these opportunities … have allowed me to fulfil my responsibilities to my people. It’s always amazing when young people come up to me to thank me. That’s why I started to paint and make art – I quickly understood this was the forum to question and create a dialogue.”

At this time when the global pandemic threatens the livelihood and safety of populations, Aboriginal people, like many other Indigenous peoples across the globe, are at risk of becoming “asterisk peoples”.

This is the risk of being represented as asterisks in large data sets, existing as just footnotes in more dominant conversations about health, culture and economics. It is this continual struggle, especially during times of crisis, that gives such gravitas to artists like Boyd, who express histories of oppression and resistance.

In creating spaces for questions and dialogue in art, Boyd places the Aboriginal experience closer towards the centre of contemporary Australian art, drawing attention to the potency of Indigenous practitioners working today. However, the final push towards a more encompassing set of cultural relations and concepts of reconciliation lies with us: as readers, as consumers, as influencers, as collectors and as people capable of tangible action. It is time to question what has, and is, happening around us, and what this might mean. This is the power of Daniel Boyd.

March 31, 2022
Blood sculptures that melt in the warm air on opening night, chewing gum soldiers that visitors tread across the gallery floor and jaffas that melt into hair gel are all exchanges of substances that are part of the process in Tim Silver’s artworks. To Edward Colless they form a poetic theme of sickening, contaminating love like the kiss of a vampire.
END_OF_DOCUMENT_TOKEN_TO_BE_REPLACED
https://artcollector.net.au/wp-content/uploads/2022/03/Tim_Silver-1_1-800q.jpg 531 531 AdrianaBorsey https://artcollector.net.au/wp-content/uploads/2021/11/Art-Collector-logos-transparency-WHITE-1080x1080px-2.png AdrianaBorsey2022-03-31 15:44:352022-03-31 15:44:35Artist Profile: Tim Silver

March 31, 2022
Makinti Napanangka, now over 70 years old, paints on the ground in the open air hunched over her canvas, her brushstrokes confident and instinctive. The efforts of her day’s work are eagerly sought by institutions and collectors all over the world. Jennifer Isaacs visited this prominent desert painter’s remote home base at Kintore, to watch her work.
END_OF_DOCUMENT_TOKEN_TO_BE_REPLACED
https://artcollector.net.au/wp-content/uploads/2022/03/Makinti2-800-sq.jpg 545 545 AdrianaBorsey https://artcollector.net.au/wp-content/uploads/2021/11/Art-Collector-logos-transparency-WHITE-1080x1080px-2.png AdrianaBorsey2022-03-31 15:25:222022-03-31 15:25:22Artist Profile: Makinti Napanangka

Michael Vale: Michael in the Madness
Scroll to top