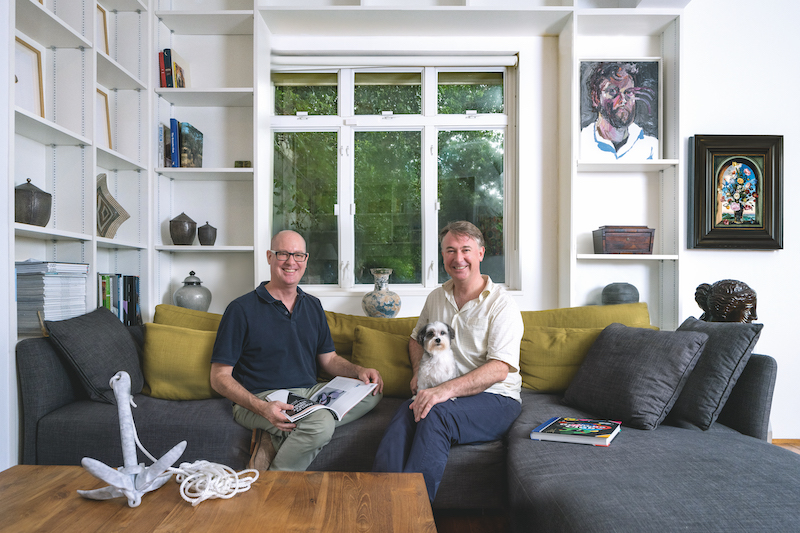 Alan Pigott and Alan Conder readily admit that finding their apartment in Hong Kong was a stroke of very good luck – a friend of a friend of someone they knew, gave them the heads up and they were able to secure the lease. The apartment is a 1954 gem in Pok Fu Lam, rising high above Sandy Bay of Hong Kong Island. It has a generous balcony and a massive fig tree, with deep green leaves and tangled roots that clutch to the sloping embankment. Uniquely, for apartments in Hong Kong, it also has wall space, vital for these avid art collectors. Conder and Pigott, who are both chief executives of fintec companies, operating in the fast growing online payments industry, moved to Hong Kong in 2009.

Both collectors giggle in response to the “Do you remember the first work you purchased?” question. The reason for the laughter is because it was not just one work, but four. The pieces were purchased “from the inimitable Simeon Kronenberg,” says Pigott. The collecting journey began with three works by Daniel Crooks and one by Ramey Ramsey. Conder adds, “We had never seriously bought art before. But, like a lot of collectors once we got started we quickly got hooked.” That was 14 years ago when they were living in Sydney.

Collecting has been a shared joy, a learning experience and a facilitator of friendships. Many of the acquisitions mark significant milestones in their lives. Conder remembers, “The serviced apartment we rented for our first month in Hong Kong was above Cat Street Gallery. On our first day, when we knew no one, we saw a beautiful photographic work depicting circles of light in the window. Through that art gallery and through our collection we have established a context for our life in Hong Kong which is really rich and enjoyable.” The work was by English artist duo – Rob and Nicky Carter.

Pigott takes up the story, “We were over in London a few weeks ago – we often catch up with Rob and Nicky – and they had a work available from the particular series that was showing at Cat Street Gallery on our first day in Hong Kong, so we acquired it as a marker or milestone of our lives here, some seven years after we arrived.”

Photography is a prominent feature of the collection. Julie Rrap, Petrina Hicks, Darren Sylvester, Trent Parke, Shaun Gladwell and Daniel Crooks are all well represented. The recent acquisition of Michael Cook’s Mother series gave the collectors additional pleasure when they loaned it to Tweed Regional Gallery for an exhibition named after the series. Pigott comments, “the hang they did in the Tweed was exceptional. They are amazing pieces. The same show then went on to Sunshine Coast Regional Gallery in Caloundra, Queensland, which is really lovely because that is where Michael is originally from.” Conder says of Cook, “We would have 20 of his works and would love to have some of his earlier works from the first two series. He is remarkable.”

“For some time we followed avidly the Art Collector series of top artists under 5k, we really enjoy supporting emerging artists” says Conder. But in-depth collecting is now the order of the day. The pair seek to buy multiple works by individual artists to show the diversity of their practice. For instance, they have examples of every material Michael Zavros has employed and multiple works from across various periods of time. “I think he is one of the best artists of our time, the depth and complexity he gets from hand drawn or painted work is hard to beat,” says Pigott.

Good relationships with galleries is key to the pair’s ability to collect top Australian work from afar in Hong Kong. “As you might imagine we buy, sight unseen,” explains Conder, “[but] we have never been disappointed. I think that distance creates a particular relationship of trust in the gallery and the artists themselves.” Conder and Pigott fervently avoid buying from the secondary market. Pigott says, “We want to support a healthy gallery/artist relationship. I don’t think great galleries like Sullivan+Strumpf get enough recognition for their role in arts development.”

A resounding and emphatic “No!” from both parties is their answer to the question – “Do you think your collection reflects a nostalgia for Australia?” Pigott takes the response, “I would never say that we feel a nostalgia to Australia. The artists we have do not represent Australia as such in their visual sense. They are incredible in their own right.” Conder endorses the comments with “they stand more than equal to the best in the world in any category. For instance, you won’t find a better sculptor than Australian Alex Seton, he is a genius.”