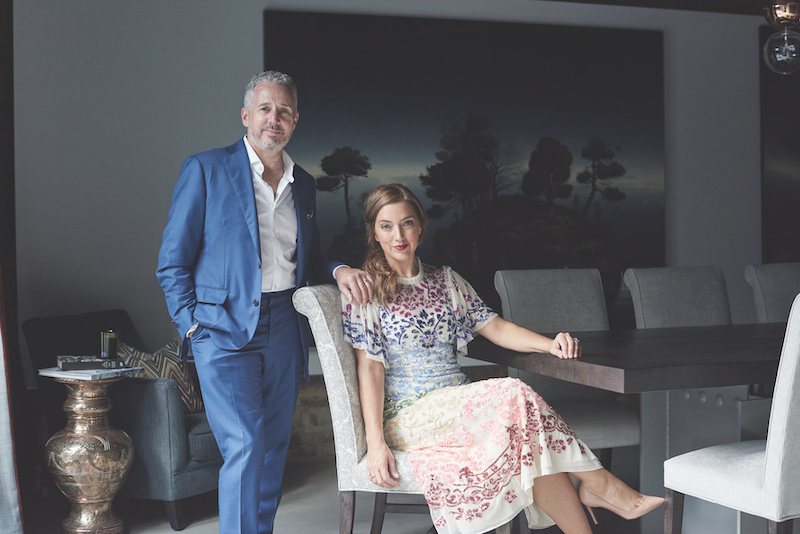 When Nebraska-born Kallie Blauhorn moved to Australia in 2005, she began collecting postcards from the National Gallery of Victoria (NGV). “I couldn’t afford to buy art when I came here,” she tells me via videophone from Melbourne. “So instead, I bought NGV art postcards and framed them.” Today, Kallie is a member of the NGV Women’s Association, while her husband, Telstra CEO Andy Penn, serves as a Trustee at the same institution.

Together, the couple’s personal collection surpasses 350 artworks, with 80 per cent comprising Australian artists. Among them are works by luminary photographers, from the beguiling world of Christian Thompson, Robyn Stacey and Tamara Dean to politically-charged portraits by Hoda Afshar, Warwick Thornton and Michael Cook.

“I’ve become mad about photography through my involvement with the Monash Gallery of Art (MGA),” says Kallie, who is the MGA Foundation Chair. “I think our country produces some of the most incredible talent right now.”

As a “kid growing up in the cornfields”, Blauhorn wasn’t exposed to art, although she developed a passion “for collecting random items, like buttons or leaves, and presenting them to my family”, she fondly recalls. “I loved the interaction of showing people what I collected and engaging in conversation; this continues today by presenting our art collection to friends.”

Hailing from south England, Penn was a “high-school dropout” who forged a successful career in the shipping and insurance sectors; the latter involving a 1992 relocation to Australia. Before joining Telstra in 2012, he was tasked to sell off a former company’s corporate art collection. “This experience taught me to understand the commercial side of art,” Penn reveals. “I bought my first work, by Tim Storrier, and the collection grew from there.” The couple married in 2016, after meeting at Arun Abey’s How Much is Enough? book launch hosted by Penn. The pair bonded over their love of art, with Blauhorn remarking that, “Andy has a sophisticated knowledge of Australian art, while I enjoy the hunt of collecting. This is where our passions overlap.”

This killer combination led the couple to enlist Technē Architecture + Interior Design in 2017 to convert a former textile factory in Melbourne’s Prahran into a three-storey brutalist blockhouse that solidified their vision: “We wanted a home where art came first, and living second,” Blauhorn posits. Indeed, their abode emits such commercial-gallery-gravitas – with an entire ground floor and chunks of the upper-level living quarters devoted to showcasing art – that I temporarily forget it’s a private home.

“Art is the most prominent part of our interiors,” says Blauhorn. “It’s because we placed the artworks within the room, rather than adding them as an afterthought.”

Ironically, the couple and I converse in different rooms today. With COVID-19 regulations abound, they take me on an iPad-led tour of their 520-square-metre property.

Technē’s art-and-architecture synergy is evident in the Prahran space: a bespoke concrete structure housing an interior of charred timber cladding and heritage brick perimeters, which are exposed between museum-style walls. As Technē director, Nick Travers, tells me: “Our ethos was to look for the poetry and art of the building; this meant taking a crafted approach to designing a warehouse-type dwelling that integrated art within the building’s original fabric.”

It’s this slick, dark-toned aesthetic that allows art to vibrantly leap out, especially the works that informed the initial house design: Tim Storrier’s landscape painting Evening Embers (1995) and teamLab’s computer-generated video Universe of Water Particles Gold (2016). “These artists are dramatically different in their nature of working,” Blauhorn notes. “Yet they both have an ability to gravitate people towards a space.” Penn positions the screen towards an opulent sitting area often used to entertain guests. Here, Storrier’s fireball-orange-skied masterpiece is framed by reddish furniture decor and a cone-shaped fireplace that provides a chromatic accomplice to Storrier’s roaring work. The room is rounded up by a series of natural ochres on stringy barks by Galuma Maymuru, Wukun Wanambi, Ivan Namrikki, Emmanuel Wurrikdj and Eddie Aning Mirra Kerr. As a patron of the National Aboriginal and Torres Strait Islander Art Awards (NATSIAAs), Penn has formed close ties with the Indigenous art community throughout the years.

At the far end of their open-plan space is a specially constructed wall transmitting teamLab’s five-screen video of Rapunzel-hair-like particles flowing down a dark abyss. Penn discovered this epic piece in Singapore via the gallerists Martin Browne and Ikkan Sanada. “We started collecting digital art several years ago, so we’re not experts yet,” Penn professes. “But I feel like, if you’re going to display a digital work in your home, you need something that’s calming, not tumultuous: teamLab’s algorithmic waterfalls are mesmerising and easy to live with.”

The pair then whisk me through the rest of the home, which boasts an eclectic display of paintings, ceramics, sculptures, installations and street art, featuring Hannah Quinlivan, David Griggs, Peter Cooley, Maria Kuczynska, Dale Frank, Stormie Mills and more. “Our collection doesn’t focus on a particular genre or objective,” states Penn, who acquires works from auction houses and galleries like Sullivan+Strumpf and Dominik Mersch Gallery, both in Sydney. “Rather, it reflects our personal journey and tastes, which change over time.” Blauhorn, who is currently planning a virtual artist talk series at the MGA, nods in unison, “Art and culture is a strong fabric in both our worlds,” she says, “it’s what binds us together.” When it comes to weaving art with life, Penn and Blauhorn continue to make the right call.

What’s in the Stockroom: Weasel Gallery
Scroll to top