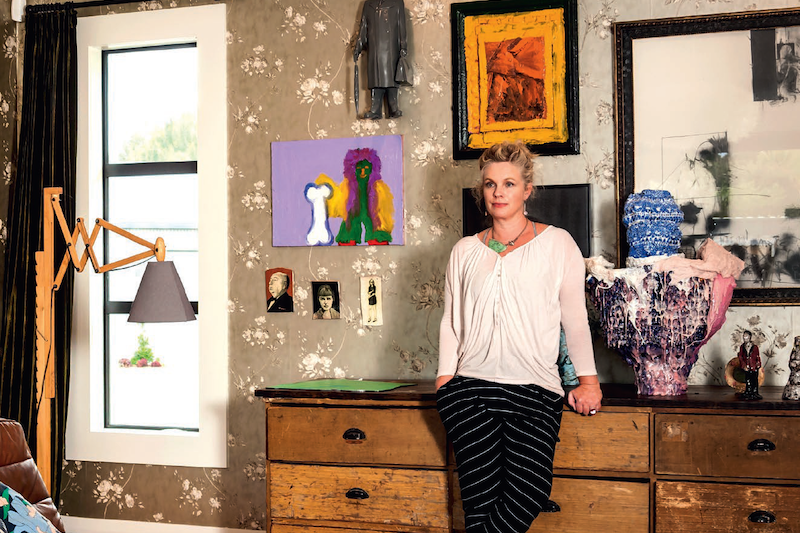 New Zealand artist Virginia Leonard exhibited seven large ceramic works with PAULNACHE gallery at Spring1883 Art Fair, Melbourne in 2016. Being from Matakana, a small town north of Auckland, and unknown in the Australian market, only working in clay since 2013, Leonard was unsure of the reception from the Spring1883 audience. She needn’t have been concerned, as her works immediately sold out on opening night with collectors including Michael Schwarz and Peter Braithwaite responding enthusiastically. When PAULNACHE director Matt Nache first encountered Leonard’s work earlier in 2016, he hadn’t seen anything quite like it. “She came from a painting background then started to make stunning, multi-stacked clay works, held together by gravity and museum wax, which were raw and exciting; total chaos and control. At Spring1883, collectors were overwhelmingly attracted to Virginia’s very visceral, oozing glazes and voluptuous sculptural forms. When an artist experiences this kind of patronage and support in their career, then anything is possible,” he says.

If it seems a lot has happened quickly for Leonard, this sense of urgency and immediacy is mirrored in the way she works in the studio. “Not knowing traditional ceramic rules was an advantage for me. I could push hard up against conventions, and approach clay in a more reckless and fearless manner,” she says. Leonard twists, wrenches, tears, scars, clumps and distorts the clay and her glazes are applied with a painterly informality. Resins add further jarring surface tension, manipulated into three-dimensional forms which ooze off the surface like thickened lumps of scar tissue. Assembled from multiple parts, with elements such as nails puncturing the surface, works are installed on high plinths, often at precarious angles. Viewed at eye level, they become human scaled self-portraits, physical portrayals of the scarring and chronic pain she has experienced since a horrific motorbike accident in her 20s. “These works are a visual depiction of that pain,” she says. Surfaces can be raw with injury or obscured by decoration, with humour countering the discomfort. “In all these ways, they relate closely to me and my body.”

Her second solo exhibition Christmas Time at Middlemore is at PAULNACHE in Gisborne, NZ in February 2017, with a studio preview at Matakana, in late January. She then undertakes the Guldagergaard International Ceramic Research Centre residency in Denmark in 2017.

March 31, 2022
Blood sculptures that melt in the warm air on opening night, chewing gum soldiers that visitors tread across the gallery floor and jaffas that melt into hair gel are all exchanges of substances that are part of the process in Tim Silver’s artworks. To Edward Colless they form a poetic theme of sickening, contaminating love like the kiss of a vampire.
END_OF_DOCUMENT_TOKEN_TO_BE_REPLACED
https://artcollector.net.au/wp-content/uploads/2022/03/Tim_Silver-1_1-800q.jpg 531 531 AdrianaBorsey https://artcollector.net.au/wp-content/uploads/2021/11/Art-Collector-logos-transparency-WHITE-1080x1080px-2.png AdrianaBorsey2022-03-31 15:44:352022-03-31 15:44:35Artist Profile: Tim Silver

March 31, 2022
Makinti Napanangka, now over 70 years old, paints on the ground in the open air hunched over her canvas, her brushstrokes confident and instinctive. The efforts of her day’s work are eagerly sought by institutions and collectors all over the world. Jennifer Isaacs visited this prominent desert painter’s remote home base at Kintore, to watch her work.
END_OF_DOCUMENT_TOKEN_TO_BE_REPLACED
https://artcollector.net.au/wp-content/uploads/2022/03/Makinti2-800-sq.jpg 545 545 AdrianaBorsey https://artcollector.net.au/wp-content/uploads/2021/11/Art-Collector-logos-transparency-WHITE-1080x1080px-2.png AdrianaBorsey2022-03-31 15:25:222022-03-31 15:25:22Artist Profile: Makinti Napanangka

On the World Stage: Richard Maloy
Scroll to top