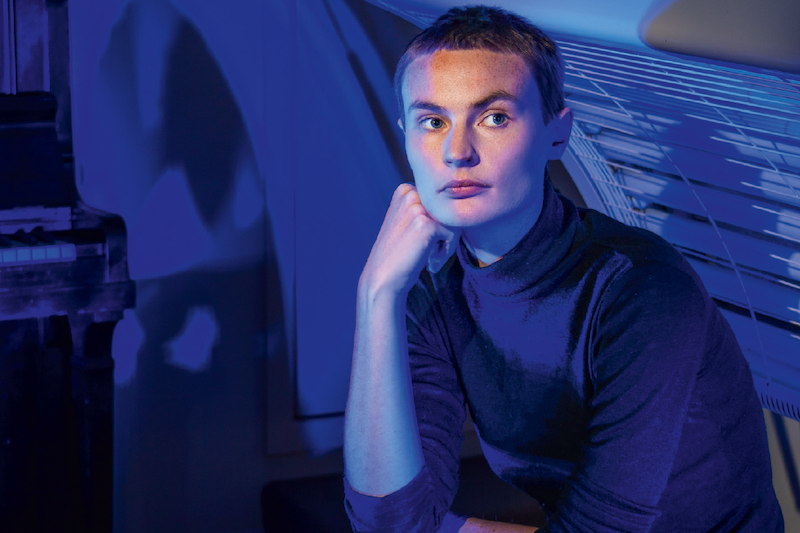 Juliet Carpenter investigates emotional sentiment and detachment through the sequencing of language and image.

Two years after graduating from Elam School of Fine Arts, Auckland, Juliet Carpenter’s work, which focuses on film and computer animation, is entering a new phase of development. Carpenter was a co-founder of Gloria Knight, an artist collective (2012–14) that shared interests in the effects of technological developments. In 2014, the collective showed in Melbourne at the Spring 1883 art fair and Aria at Utopian Slumps.

With an interest in the way light and colour influence perception, Carpenter’s investigations into emotional sentiment and detachment through the sequencing of language and image has been seen in works such as Half Bianca (2014), where the cropped bodies of young men wearing white are beautifully filmed in the intense blue light of dusk while animated images of body parts float past. In Silent Treatment (2014), the viewer explores the “second hand furniture of memory” through a sequence of moving images and poetry which progress from a plain blue screen, through flickering black and white images of landscape, highlighted moments of red, culminating with an animated head of a woman hysterically crying blue tears as the music crescendos to a blue screen ending.

“Increasingly I am enjoying working with the intersection between animation, special effects and real footage – the interplay between animated sentiment and true human sentiment,” says Carpenter. While an interest in language poetry has been present and explored through the technique of voice-over, the artist is now developing the sense of characterisation and narrative further, working directly with actors and scripted dialogue. “Working in this new way, I start with a lot of writing as a way of limbering up before I develop the final scripts and accompanying audio. Images then come in around that,” she says.

The first of these new films, Ingenue (2015), was shown in the 2015 Artspace exhibition, The Shadow Of The Dome Of Pleasure, curated by Henry Davidson. “Ingenue showcases the figure of the new young actress as a means to tease out the boundaries of female roles in visual culture,” Davidson writes. “Carpenter’s practice often foregrounds sexual and emotional experiences and amplifies qualities of these narratives that are considered hysterical or disturbed. Her work is interested in the ways that individuals produce themselves as characters, especially through contemporary image technology.”

Her latest work, based around themes of automation and repetition, questions the need for human sentiment in the automated world. It was shown in a solo exhibition at Blue Oyster Gallery, Dunedin, in December 2015. As she develops these new modes of practice and ideas further, Carpenter will be one to watch in the year ahead.