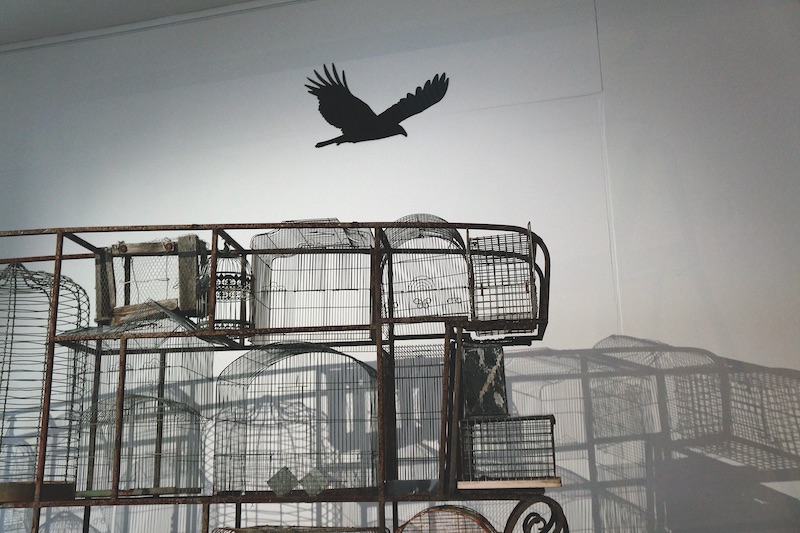 Art has been a way of having a voice, at times literally, for Karla Dickens.

Art has been a way of having a voice, at times literally, for Karla Dickens, who went to art school aged 24, graduating in 1990. She went there “straight out of rehab,” she says. “I left school early and did all sorts of tragic things, but loved art from the beginning. It’s my discipline, and the way I say what I want to say.” Her work is driven by her Aboriginality, sexuality and a difficult early life. She did lose her voice, was psychotic for a time and, in art, found a way to express herself.

While she has held some 20 solo exhibitions since 1994, broader recognition has come some decades into her practice. Her work is a powerful expression of her life – the impact of addiction, being Aboriginal and being gay.

Her notice may have begun with the award of the New South Wales Parliament Art Prize in 2013, for an Australian flag she found at the tip and embroidered with little crosses, titled Day of Mourning. While it “caused a fight,” it netted Dickens the purse of $40,000. “The majority of Australia celebrates 26 January by wrapping themselves in the red, white and blue flag, having barbecues and feeling proud to be young and free,” she said in 2013. “I went about hand-sewing my grief, with one cross after another.”

Most recent exhibitions have included the 2014 Courting Blakness at the University of Queensland; TarraWarra Biennial 2014: Whisper in My Mask; Hereby Make Protest at Carriageworks in Sydney; and The Native Institute at Blacktown Arts Centre. A major new installation was created for Wiradjuri Ngurambanggu, the inaugural exhibition for Murray Art Museum Albury in 2015.

The MAMA catalogue features Dickens’s Work horse II, “one of the most powerful works I have seen in ages,” according to dealer Andrew Baker. “She is an artist going deep within herself to wrestle a body of work from nowhere.” Work Horse I (2012) was acquired by the Art Gallery of Western Australia through its Indigenous Art Award. Her first solo exhibition with Andrew Baker Art Dealer in 2014 saw works sold to Australian National Maritime Museum, Artbank and Bendigo Art Gallery. Others were reserved by a national collection and two regional galleries.

Now 48, Dickens has been awarded an AsiaLink Residency that will see her working in Yogyakarta in Indonesia in 2016. Her plans include working on the Seven Sisters theme – an important Australian story but also a globally important myth – related to the Pleiades cluster of stars. In early 2015 she began work on this theme, “taking back the stars,” she says. Her future promises more stellar installations and a possible shift from the personal into the universal.