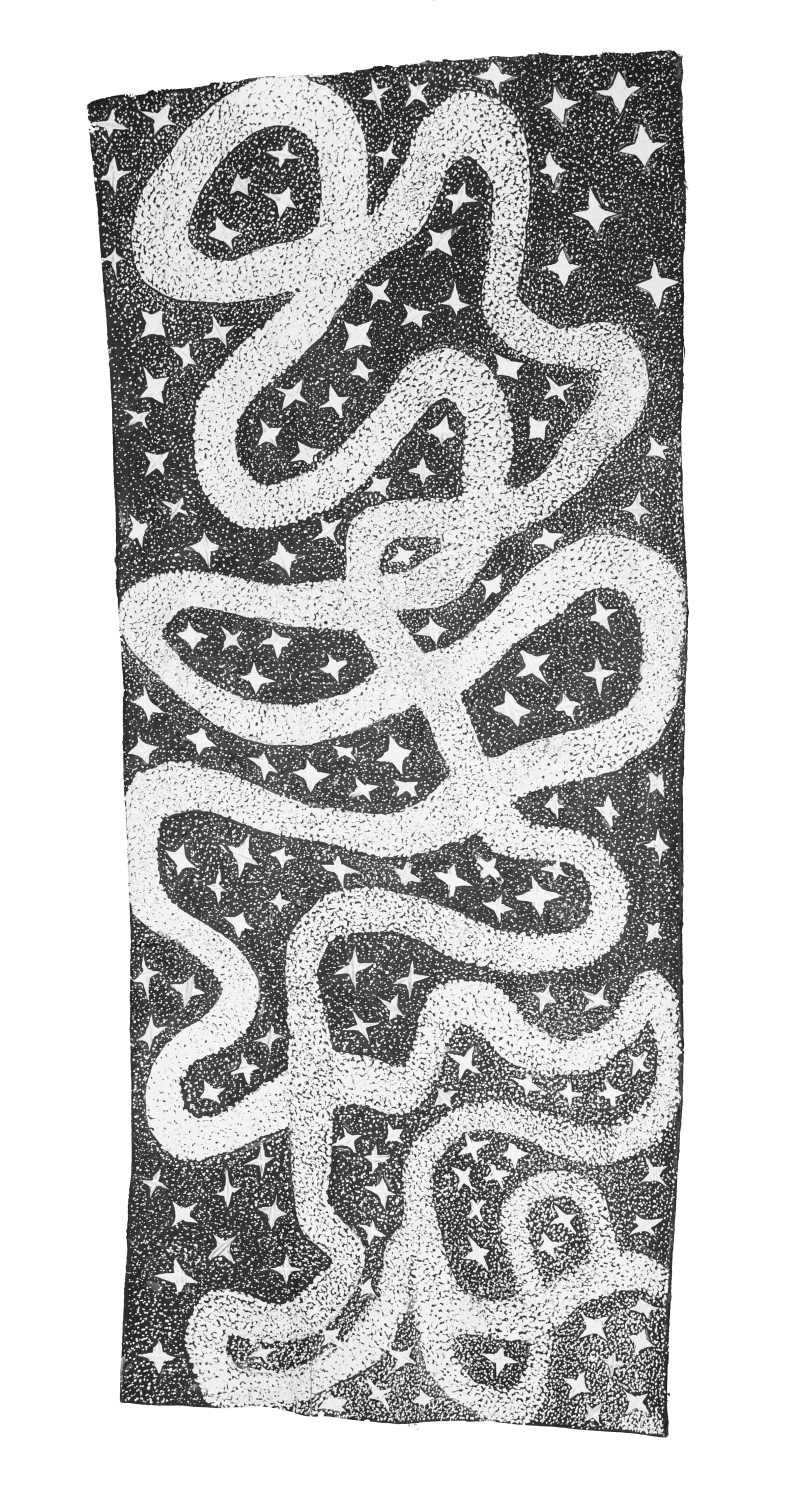 Naminapu Maymuru-White has recently seen a high point in her lifelong journey as an artist, as new stagings of her work occupy a dramatic scale befitting of her expansive vision. Speaking to her from Buku-Larrŋgay Mulka Centre in Yirrkala where she regu­larly works, we discuss how recent new work is both a continuance and expansion of her on-going body of paintings relating to the milŋiyawuy (milky way). Painting for almost 60 years, beginning at around age 12, today Maymuru-White sees her practice as a continuation of teaching new generations and doing work “for the future and the future’s coming”.

With her practice tethered to deep ties across generations of her family, as leading Yolŋu artists, and to the eternal archive of the Maŋgalili clan that she draws upon, Maymuru-White wields a vision that medi­ates the multiple scales of life relevant to our sense of being in the world, from everyday relating to the cosmos. As Will Stubbs, coor­dinator at the Buku-Larrŋgay Mulka Centre, wrote for her sell-out exhibition at Salon Art Projects, Darwin in 2019, in drawing on the infinite “Maŋgalili portfolio”, her work like all great art “reaches for the shape of the universe.”

This sense of expansiveness is realised in Maymuru-White’s recent commission for Federation Square at the National Gallery of Victoria, which has acted as a prelude to its ground-breaking Bark Ladies: Eleven Artists from Yirrkala exhibition of art by Yolŋu women artists and which will run until mid-April. Spilling out across the entire floor are Maymuru-White’s finely rendered constellations of stars below a suspended horizontal mirror, encompassing visitors and inviting them to experience an embodied sense of the stories and concepts of the work’s title Riŋgitjmi gapu (river of Heaven and Earth). Curator Myles Russell- Cook describes how “Naminapu shifts our perspective, inverting sky, sea and land.”

This show will overlap with Maymuru- White’s largest solo exhibition to date at Sullivan + Strumpf, Sydney, from February to March, and which also unfolds milŋiyawuy stories across interrelated paintings on barks and larrakitj (memorial poles).

This continues a run of recent curatorial attention for Maymuru-White including last year’s solo show Approximately Infinite Universe at The Cross Arts Projects, Sydney; an acquisition for the RESONANCES exhi­bition at Fondation Opale, Switzerland; and having work added to the Kerry Stokes Collection of significant larrakitj.

Working out of Buku-Larrŋgay Mulka Centre, Maymuru-White is enjoying prac­ticing with other senior women artists and is impressed by the innovation of emerging artists, including her two sons who have watched her work and developed distinct practices. Her son Ganbilpil Maymuru also references milŋiyawuy and is one of the artists currently working with etchings on found metal, as seen in the 2021 Salon Art Projects group exhibition Murrŋiny. In both artistic vision and everyday practice, Maymuru- White works with an eye for the long future.