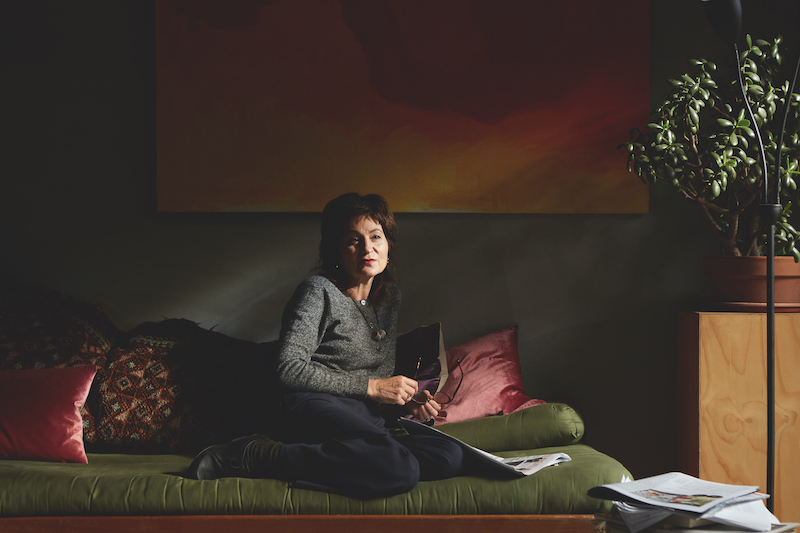 The Melbourne-based Elizabeth Newman makes a relaxed, even familiar kind of art: puffy clouds of coloured paint on canvas, monochromes or hard-edged abstraction, installations of quotidian objects scattered around the gallery. But she often pairs it with panels or titles that sound intimidatingly high-brow. “Ontology = mathematics” reads one hand-written sheet leaning against a wall, quoting the French philosopher Alain Badiou. “To choose to elevate nothing into something” reads another, this time quoting a commentator on the psychoanalyst Jacques Lacan. And Newman herself writes about her work with no small ambition. In her artist book More than what there is, she describes what she does as a “No to a No”, before adding that “two Nos make a positive”.

She’s at it again in her recent show at the hip Neon Parc Gallery, titling the exhibition

The effect that is propagated is not from the communica-tion of speech but from the displacement of discourse, and including within it a crayoned sheet bearing those words. What’s going on here? Well, the words again come from Lacan – Newman is a practising analyst when she’s not making art – and one of the things they’re telling us is that a proper psychoanalytic treatment is not merely a way of rearranging the existing elements of a patient’s reality – “communicating via speech” – but fundamentally reshaping that reality by revealing something missing from it – “displacing the discourse”.

In other words, the analyst introduces a cut into the patient’s experience. The first thing they say is No. This No is particularly important in a permissive, post-patriarchal society like ours – neo-liberal capitalism – is which nobody ever says No and all desires are immediately fulfilled. The aim of analysis, we might say, is to help us desire again by making us lack something. What the analyst wants us to do is desire to desire, and the only true failing is to give up on our desire (which can also take the form of thinking we have realised it).

So what has all this got to do with art? Well, art is good at making us desire things, for example itself, but more than that – a bit like psychoanalysis – it allows us to reflect upon desire. Art, like the analyst, introduces a lack into the world. It doesn’t so much “communicate via speech” – obviously – but at its best “displaces the discourse”. How? Take another of the panels in Newman’s show, which simply contains the words “Ceci n’est pas”. Of course, to anyone who has done first-year art history, they would be familiar  to the bottom half of René Magritte’s The Treachery of Images (1929), that enigmatic and seemingly self-contradictory painting of a pipe with the words “Ceci n’est pas une pipe” beneath.

What Magritte is saying is not as simple as it is not a pipe we are looking at, but rather that it is a pipe only because of something that is not. “Ceci n’est pas une pipe”, as it were, points to the pipe from somewhere else. It is its absence that allows the presence of the pipe. Or, put otherwise, the painting stages the pipe. It literally puts it on a stage, which must itself never be seen. And increasingly since Duchamp we understand that this is the fundamental capacity of art: to point to things, to put them on stage, to make us note, to make us desire, precisely by introducing an absence, a “Ceci n’est pas”, for which what is stands in.

Back to Newman. We do we find this cut in her work, which seems at first so undeclarative, so unrhetorical, so low-fi in its means and aspirations? Well, pretty much everywhere. From the frames of her canvases, to those puffs of colour against their flat background, to the colourful planes of the abstracts, to those strips of black tape seemingly arbitrarily stuck onto the work… Indeed, part-time art critic and fellow analyst Kate Briggs offers a wonderful point regarding Newman making so many of her works by simply laying one surface on top of another (unstretched coloured linen pinned on gallery walls, monochrome squares sewn onto floral carpets). She notes that the strange effect is ultimately to make it appear as though the surface she applies is underneath and the surface onto which it is applied is on top. And this is exactly the reversal a proper analysis seeks to bring about: to make it appear as though reality stands in for what is lacking.

In the same way Newman’s art introduces a hole into what is, which we then attempt to make up. It makes us desire again by staging for us something we can never have. We’re not cured, but we’re alive again. There is more than what there is because something is missing. Session over.

March 31, 2022
Blood sculptures that melt in the warm air on opening night, chewing gum soldiers that visitors tread across the gallery floor and jaffas that melt into hair gel are all exchanges of substances that are part of the process in Tim Silver’s artworks. To Edward Colless they form a poetic theme of sickening, contaminating love like the kiss of a vampire.
END_OF_DOCUMENT_TOKEN_TO_BE_REPLACED
https://artcollector.net.au/wp-content/uploads/2022/03/Tim_Silver-1_1-800q.jpg 531 531 AdrianaBorsey https://artcollector.net.au/wp-content/uploads/2021/11/Art-Collector-logos-transparency-WHITE-1080x1080px-2.png AdrianaBorsey2022-03-31 15:44:352022-03-31 15:44:35Artist Profile: Tim Silver

March 31, 2022
Makinti Napanangka, now over 70 years old, paints on the ground in the open air hunched over her canvas, her brushstrokes confident and instinctive. The efforts of her day’s work are eagerly sought by institutions and collectors all over the world. Jennifer Isaacs visited this prominent desert painter’s remote home base at Kintore, to watch her work.
END_OF_DOCUMENT_TOKEN_TO_BE_REPLACED
https://artcollector.net.au/wp-content/uploads/2022/03/Makinti2-800-sq.jpg 545 545 AdrianaBorsey https://artcollector.net.au/wp-content/uploads/2021/11/Art-Collector-logos-transparency-WHITE-1080x1080px-2.png AdrianaBorsey2022-03-31 15:25:222022-03-31 15:25:22Artist Profile: Makinti Napanangka