Andrew Sullivan: Survey into the Cretaceous 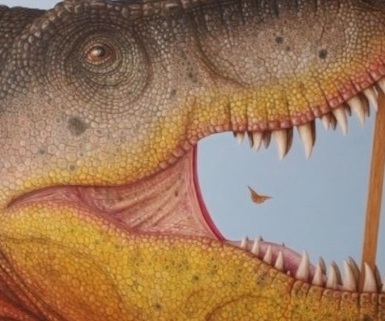 Survey into the Cretaceous is a journey into the painter’s imagination. Andrew Sullivan has imagined himself as an assigned artist with a team of palaeontologists, scientists and geographers on a survey expedition into the late-Cretaceous period, with a broad cross-section of species being represented, some now extinct, some still extant today.

This exhibition includes paintings of some of the most iconic and best-known dinosaurs and flying reptiles of the late-Cretaceous period. These works reference still life conventions and the staged quality of early naturalist illustration but with many of the animals depicted at life size. Photographs are added to evoke a playful quality and lend authenticity to the conceit of the survey expedition.

Andrew Sullivan is a widely exhibited Sydney-based painter who has been a multiple finalist in major national art prizes and in 2014 was the recipient of the Sir John Sulman Prize at the Art Gallery of New South Wales.

Richard Wastell: Painting East From The Plateau
Scroll to top