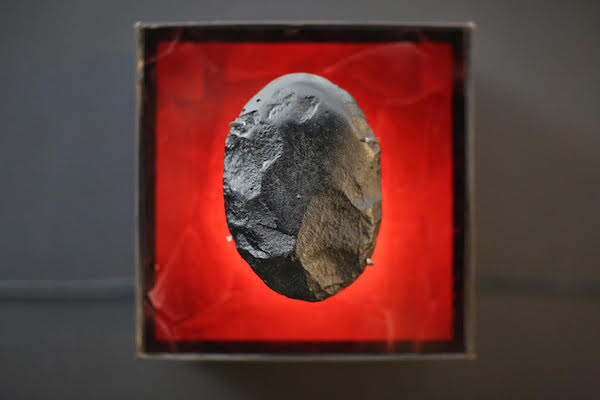 hand/made/held/ground is a major new body of work by Brenda L Croft, a proud Gurindji/Malngin/Mudburra woman whose background also includes Australian/Chinese/English/German/Irish heritage. Croft’s multi-disciplinary practice as an academic, artist, consultant, curator and researcher spans three and a half decades,

encompassing ongoing critical, collaborative Indigenous performative/autoethnographic research. Her work is intimately engaged with her patrilineal community, the sovereign and displaced Gurindji/Malngin/Mudburra peoples, and this heritage, connected to the Victoria River District of the Northern Territory, informs this major new body of work.

The installations encompass ‘multiples’ – second-generation objects, or ‘descendants’, of original found/repatriated cultural objects from the artist’s patrilineal traditional country, of which the artist is a temporary caretaker involved with their revival and reinterpretation. The creation of multiple objects references the artist’s position as the descendant of a Stolen Generations’ member of the Gurindji/Malngin/Mudburra nations, her father, Joseph Croft (c.1926 – 1996).

Through re/making, re/working, revitalising, cultural objects literally hewn from the ground by hand, Croft is engaging with the First Nations’ cosmological concept of ‘Everywhen’, whereby the past is intrinsically operating within the present while also being intrinsically engaged with the future – simultaneously, consecutively, infinitely.