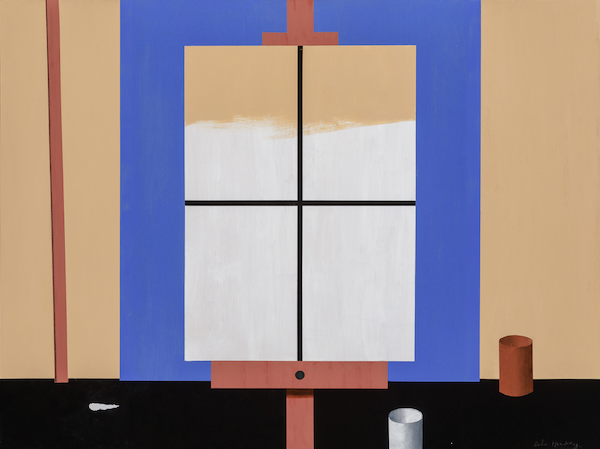 Dale Hickey’s much anticipated solo exhibition, his first in eight years, and his debut at Niagara Galleries, features recent paintings, alongside a single work from 1990, offers an insight into the development of his studio paintings, which feature the artist’s view of his easel, in various incarnations. These paintings, which are concerned with reality, artifice and perception, are presented alongside an exhibition of new work by Paul Boston.

This pairing is apt, given that Boston was once a student of Hickey’s. One is tempted to highlight the similarities of the work: both employ a brilliant use of negative space, and share a concern with illusion and materiality, but the similarities quickly dissipate.

Boston’s muted works are in stark contrast to Hickey’s often high-key palette. The geometric forms of Boston’s paintings serve to confuse barriers and perception and unravel over time.

The exhibitions feature paintings with prosaic titles: Boston has labelled his works Painting, and are numbered 1 to 14; Hickey’s work, also numbered, from 1 to 9 are named Untitled. These titles do little to assist with a single reading of the work, only adding to the elusive quality of both Dale Hickey and Paul Boston’s paintings.