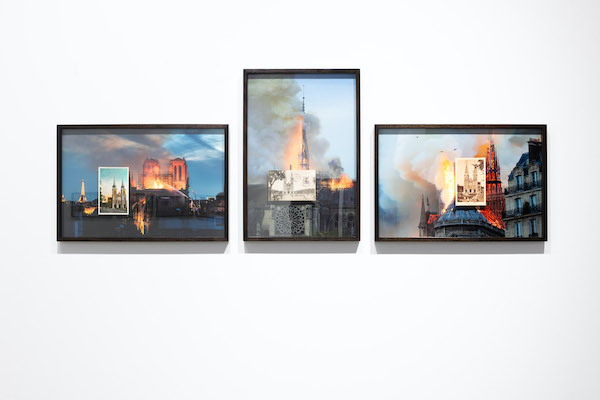 Courtesy: The artist and THIS IS NO FANTASY.

Following the French conquest of South Vietnam in 1862, the Roman Catholic Church established a community and religious services for French colonialists. The first church occupied a Vietnamese pagoda, abandoned during the conquest. This pagoda was eventually replaced by a wooden church, which in turn was replaced by the Notre-Dame Cathedral Basilica of Saigon, officially Cathedral Basilica of Our Lady of The Immaculate Conception. Established by French colonists who initially named it Cathédrale Notre-Dame de Saïgon, the cathedral was constructed between 1863 and 1880.

On 15 April 2019, a fire broke out beneath the roof of Notre-Dame de Paris cathedral in Paris, France. By the time it was extinguished, the building’s spire and most of its roof had been destroyed and its upper walls severely damaged; extensive damage to the interior was prevented by its stone vaulted ceiling, which largely contained the burning roof as it collapsed. The outpouring of global grief was immediate and a fundraising campaign following the destruction brought in pledges of over a Billion Euro within a week.

Taking the above histories as a starting point Lost and Found (2019 – ) is an ongoing body of work that seeks to question the ways in which colonial ideologies impacted how people value various cultures and communities. The project utilises found photography and digital image archives (Google Images, Trip Advisor, Getty Images, etc.) to interrogate the ways in which systems of colonialism, imperialism and eugenics continue to influence the ways that colonised bodies relate to the world at large.