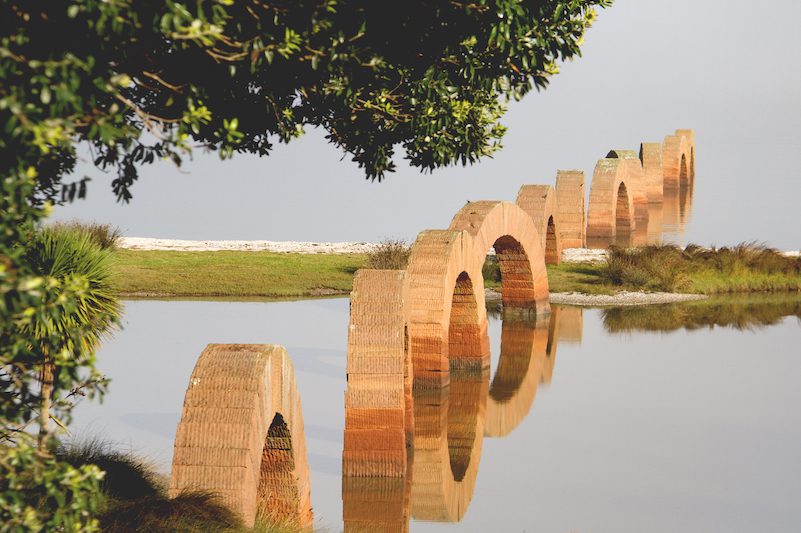 Gibbs Farm sculpture park is home to a series of major site specific artworks commissioned from some of the world’s most significant artists.

Collector and businessman Alan Gibbs acquired 990 acres of isolated farmland on the Kaipara Harbour, north west of Auckland, New Zealand in 1991. Since then he has established a remarkable sculpture park known as The Farm, with 28 site specific works from sculptors such as Anish Kapoor, Neil Dawson, Richard Serra and Maya Lin.

When working with an artist, Gibbs first invites them to stay at The Farm to observe the changing coastal environment around them. “We talk over dinner, debate ideas and politics, test the limits of possibilities and walk The Farm discussing sites. During the development and planning around his memorable commission, Richard Serra visited The Farm once a year for five years,” Gibbs explains.

Acquiring the farm, Gibbs was first struck by the beauty of the light on the water and the way the hills fell gently down to the sea. Today, visitors are struck by the way the light, the wind, the hills and water resonate so strongly in the artworks themselves, as well as their close proximity to 30 different animal species – from  giraffes to exotic cattle breeds. “The hills and the animals interact with the art in a manner that is unique to The Farm,” Gibbs says.

Be it his encouragement to enable artists to reach beyond their own expectations when developing a new sculptural commission, or the challenge and inventiveness of the engineering feats the works demand, Gibbs gets great pleasure from, and says he has always inherently been prepared to do, “extreme things”.  Indeed, The Farm sees Gibbs being both ambitious and playful – with scale, with colour, and the land. “The Farm allows me a great sense of discovery and creative adventure,” says Gibbs, who had a busy 2017 with a number of international artists visiting The Farm and the construction of two new works.

The art and the landscape, in Gibbs’ words, are “co-workers at The Farm,” operating in partnership throughout varying seasonal changes, and from dawn to dusk. In 2013, 110,000 cubic metres of earth was excavated to create Maya Lin’s land art work, A Fold in the Field. Andy Goldsworthy’s Arches, 2005, literally straddles the tidal zone between land and salt water, the wetlands and bird sanctuaries. Works by George Rickey reflect the light across their stainless steel blades. Neil Dawson’s Horizons, 1994, high on a hilltop, invites the sky to become part of the work. The great horizontal sandstone slabs used by Chris Booth in an early commission directly reference the Kaipara’s geological formations.

The spectacular Te Tuhirangi Contour, by Richard Serra, with its 257 metres of steel, representing a huge jump in the scale of commissioned works at The Farm, is at times confronting and dramatic, at times delicate and sensuous. It sits on the land like a giant confident brushstroke would on a canvas – boldly claiming and defining the space.

Evolving and developing over time as a private endeavour, Gibbs works closely with son-in-law and architect Noel Lane on all aspects of the commissions. “Working with the artists, I see it as a creative joint venture where I can enable things to happen, and at times even poke, prod and challenge artists to do things they thought they could never do.” Perhaps in the process, he too has achieved things at The Farm he might not have ever thought possible.

Gibbs Farm is a private property, open monthly by prior appointment only to artists, educational institutions, charities and the public. Reservations to visit Gibbs Farm can be made directly on the website.