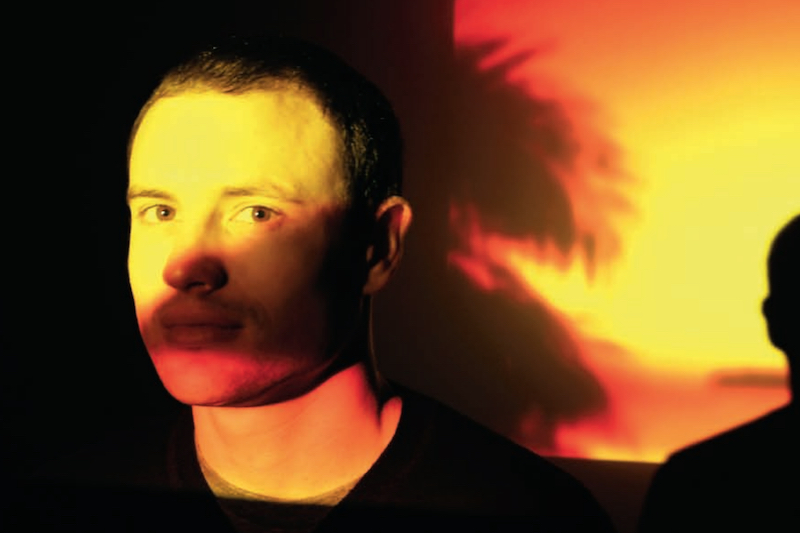 Grant Stevens: Warning, this artist is messing with your head

Grant Stevens presents conundrums, problems and puzzles built from the plots of movies and the names of stars to faraway turtle beaches and endless guitar solos…. Often all at the same time. Andrew Frost tries to sort it all out.

In 2004 Grant Stevens mounted an installation called Dazed and Praised. Text flashed on a TV screen while a stereo played songs by Cream, Jimi Hendrix, Led Zeppelin and Black Sabbath. When you put on a set of headphones hanging next to the TV screen you heard a series of voices talking about something definite yet obscure. The text and voices had been lifted from a film called Dogtown and Z-Boys. Where the original film had been a documentary about some LA surfers claiming to have given birth to the culture of skateboarding, in Stevens’s hands the statements became absurdly overblown claims to greatness – paradigm shifting, universally relevant, world changing testaments to events of almost incomprehensible importance. With the competing soundtrack of heavy metal classics – and the title of the overall artwork referencing the stoner/slacker classic Dazed and Confused – the implication was that the statements might also be nonsense.

When two things come together a third meaning is created. The relationship between two photographs, for example, might suggest a meaning that wouldn’t exist if either photograph were seen in isolation. The same thing can happen when you put text with an image or add a soundtrack to a sculpture. And it’s the conceptual space where Grant Stevens creates his art. Stevens’s work is always in state of flux, asking if a third meaning is definitive, or is it fluid? And what if you start confusing the sequences of information and jumble the signals? His work isn’t just provocative, it’s a little scary – Grant Stevens messes with his audiences’ minds.

Born in Brisbane in 1980, Stevens has created a singular body of work. Since the early 2000s, he’s experimented with text and sound, created sculptural objects, appropriated sequences from Hollywood films, made audio works, drawn trippy Mandalas on paper and installed a giant bean bag in a gallery upon which his audience could rest and listen to soothing words of comfort and encouragement. Educated at the Queensland University of Technology, where he graduated with a PhD in 2007, Stevens cites formative influences that mark out his work within the lineage of classic pop conceptualists. “When I was an undergrad I was really into artists like Ed Ruscha, Richard Prince and John Baldessari,” says Stevens. “How they mixed conceptual art with pop and appropriation definitely shaped my practice early on. There are also certain shows that keep coming back into my head, like Olaf Breuning and Hany Armanious’s respective shows at the IMA [Institute of Modern Art]. Friends of mine like Wilkins Hill,Jemima Wyman and Peter Alwast are also really significant in the way I think about making work.”

Stevens divides his work into two categories – text and image. Although pieces like Nothing’s Changed [2004] – in which the audience was confronted with three screens of overlapping text and audio from Woody Allen films – or When There’s Love [2005] – an installation of scrolling lyrics in a karaoke-like set up – are all visual experiences, the emphasis is on a relationship between text and the way it is interpreted in context.

The image works, on the other hand, have appropriated fragments from well-known Hollywood films, concentrating on spoken phrases or visual gestures. No Sir [2003] took Jack Nicholson’s immortal reading of the line “You can’t handle truth” from A Few Good Men and created a repetitive, stuttering four screen mosaic of the actor’s face. Mr. President [2001] lifted a sequence from Independence Day where the White House is destroyed using the same four screen method. Another four screen video – Danger Zone [2003] – is something of an anomaly within Stevens work, lifting a sequence from Top Gun [1986], Tom Cruise and Kelly McGillis communicate entirely without spoken words suggesting that communication is a gesture as much as it is a verbal statement.

“Most of my PhD research was about the idea and process of editing in terms of film, language and art,” says Stevens. “I was looking at models of film editing and relating them to philosophies of writing and the history of collage in art, from Picasso and Braque, through pop and appropriation to contemporary artists. A big part of that research was looking at how we construct meaning from combinations of fragments – using observation, and trial and error to fill in the gaps.”

It’s within those gaps that Stevens’s work can become deeply disturbing. Video text pieces such as Then I Left You and Why The Long Face [both 2005] challenge the viewer to make sense of text and spoken word combinations that differ, presenting puns and homonyms in place of straight textual representations of the spoken word. The effect on the viewer is similar to brainwashing – a sense of confusion and suggestibility that only increases as the process gathers pace. “Part of how I approach making art – especially videos – is to think how we watch films or TV, or how we listen to songs,” says Stevens. “It’s partly about attention span and thresholds of understanding, but also how we deal with information through formal devices, things like dialogue, visual clues, the rhythms and layers of sound, as well as narrative conventions. In this way, it’s also about how we fill in the gaps of stuff that doesn’t quite make sense.”

The effect of watching these videos is an odd sensation of panic and pleasure. The audience is aware of what the artist is doing yet it’s undeniable that the process also gets inside your brain. “I like that you say ‘panic and pleasure,” says Stevens. “It’s definitely important for me to try to make work that can be both compelling and repelling. I think part of that ambition is to try to reproduce – in order to figure out for myself in some way – the ambivalent relations I have with much of the source material I use… Like I can’t work out whether I love or hate Top Gun – well actually, I know I love it, but I also want to argue with the stereotypes and hegemonic narratives that it perpetuates. I guess that’s partly where I want my work to operate – in the problems and contradictions of how we engage with the stimulus and ways of communicating that are around us.”

Stevens is currently resident in Los Angeles. Arriving there in early 2007 to take up residency in one of the Australia Council’s live-in overseas studios, Stevens hoped Hollywood studios, billboards and theme parks, might inspire him but instead he’s been influenced more by Southern California’s peculiar everyday melding of fantasy and reality. He has a major show coming up at Brisbane’s IMA from May 3 to June 21. Asked what he might produce for the IMA he points to his late 2007 show with Sydney gallerist Barry Keldoulis as an example of his current interests. “I was thinking about the ways in which we try to mark out and understand our places in the world,” says Stevens. “Whether through choices about lifestyle, decor and fashion, or more formalised belief systems, education programs, or other socio-cultural affiliations, it was kind of about searching for things to believe in.”

The 2007 show had more of an emphasis on sculptural forms rather than video, but carried on with Stevens perverse mixing of inputs and outputs; The Way [2007] was a three panel image of a rainforest, laminated and mounted on a angled wall mounting, in the middle of which was a car stereo playing endless FM-lite guitar licks; Your Time [2007] was the giant beanbag with self-help advice via headphones while Really Really [2007] featured a floating universe of positive statements of love and support. “The works in that GBK show revolved around formulas of belief, pleasure and introspection,” recalls Stevens. “Things like Christian triptychs, custom home-wares, guitar solos, meditation techniques and cosmology. I guess my particular focus was on how fragments of Christianity, hippie culture, new age spiritualism, consumer materialism and the pursuits of pleasure and luxury morph into awkward and sometimes contradictory forms.

The amount of choice we have means that we are constantly making stylistic, ethical and ideological decisions in the purchases we make – whether it’s a Kenwood or Bang & Olufsen stereo, X-Box or Playstation, Qantas or ChinaAir, buying a new hybrid car or a kombi van, yes or no to organic food, Stella McCartney shoes – because they look great or because they’re vegan?… Yoga is a good example too – do you go for exercise, for relaxation, for spiritual guidance, or because there are a bunch of hot singles and a sexy instructor? And who’s to say that one reason is any more valid than any other?”

Stevens’s works question the basis of our beliefs, not just about the choices we make, but the cognitive processes that allow us to make them in the first place. “It might sound romantic but I’d like to make works that operate kind of like songs,” says Stevens. “I know if I’m into a new song I’ll want to go back to it again and again. I get sucked into a certain rhythm or melody, and it’s only later that I might start to decipher the lyrics … at which point (if it’s a really good song!), some other, unexpected dynamic between the music and the language – or between a sensory and cerebral experience – unfolds. I’m not sure if I’ve ever pulled off this balance between engaging the senses and the brain, but I’d like to think it’s possible to get close.”

Grant Stevens will be exhibiting new work at Brisbane’s Institute of Modern Art from 3 May to 21 June 2008.

October 8, 2020
Pat Brassington has established herself as one of the most important Australian artists working today.
END_OF_DOCUMENT_TOKEN_TO_BE_REPLACED
https://artcollector.net.au/wp-content/uploads/2020/10/Pat-Brassington-copy.jpg 800 800 Camilla Wagstaff /wp-content/uploads/2019/02/Art-Collector-Magazine-Online.jpg Camilla Wagstaff2020-10-08 13:39:132020-10-08 15:09:50Pat Brassington: Something beautiful & its antithesis

Lisa Adams: Outside In
Scroll to top