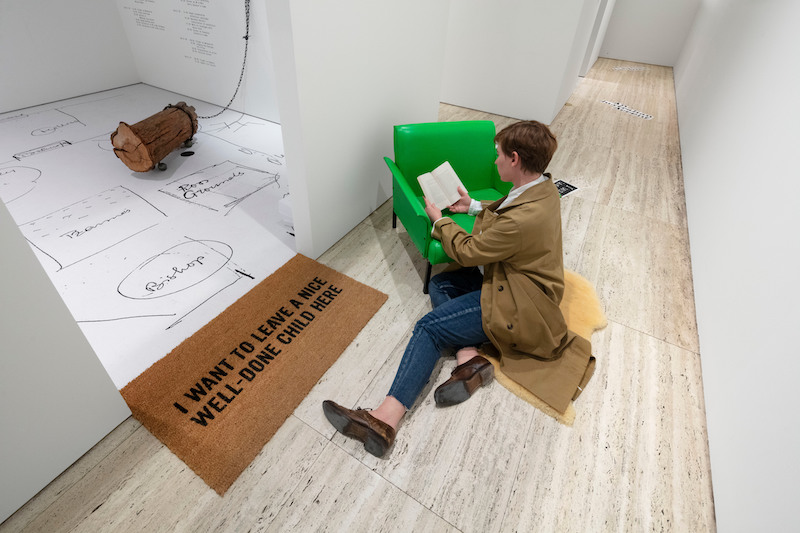 In the spotlight: 2020 female solo shows

The exhibitions by female-identifying artists happening in Australia this year.

In recent years, institutions across the globe have woken to the gender disparities and under-representation of female-identifying artists plaguing the arts, seeking to redress the issue by way of more considered acquisition and exhibition programming.

In light of the renewed emphasis on gender equality in the visual arts, we present a selection of exhibitions by female artists happening in Australian spaces this year.

This moment is perhaps no better encapsulated than by the unprecedented collaboration between Melbourne’s Australian Centre for Contemporary Art, Sydney’s Carriageworks and Tasmania’s MONA, which will present concurrent exhibitions of new work by three female artists: Frances Barrett (at ACCA), Giselle Stanborough (at Carriageworks) and Sally Rees (at MONA, represented by Bett Gallery), from March 2020. Part of the inaugural Katthy Cavaliere Fellowship which saw $100,000 awarded to each of the three artists to create new work, the collaboration is a step in the right direction when it comes to female visibility in the arts. Carriageworks also showcases powerful new installations by Kate Mitchell (represented by Chalk Horse and Anna Schwartz) and Rebecca Baumann (represented by Starkwhite) in 2020.

In July, the Museum of Contemporary Art presents a major survey exhibition by Lindy Lee. Curated by MCA’s director, Elizabeth Ann Macgregor, this exhibition will introduce audiences to key works spanning Lee’s extensive career, from early photocopy works and wax paintings that drew on Western art history, through to recent large-scale installations and sculptures that reflect Lee’s deep engagement with Buddhist philosophies. Lee is represented in Sydney by Sullivan+Strumpf and in Melbourne by Sutton Gallery.

In the country’s capital, Angelica Mesiti’s 2019 Venice Biennale work ASSEMBLY is presented at the National Gallery of Australia before it tours Australia. Mesiti’s videos are portraits that consider how communities are formed through shared movement and communication. Mesiti is represented in Australia by Anna Schwartz Gallery.

From March A family of whales will fly high over Canberra next year care of Patricia Piccinini. Commissioned as part of The Balnaves Contemporary Series through the NGA, Skywhalepapa is the new companion to 2013’s Skywhale, which itself returns to the capital after six years touring Australia and the world. The artist is represented in Melbourne by Tolarno Galleries and in Sydney by Roslyn Oxley9.

Destiny Deacon holds a survey exhibition at the National Gallery of Victoria from late March to early August 2020. The artist’s first solo in more than 15 years, visitors can catch more than 100 multi-disciplinary works made over a 30-year period, as well as the premiere of newly commissioned works. Deacon is represented by Roslyn Oxley9.

From March to August, work by Mavis Ngallametta will take over the Queensland Art Gallery / Gallery of Modern Art in the late artist’s first major survey. A celebration of Mrs Ngallametta’s art and life, Show Me the Way To Go Home will feature large-scale paintings of Country in and around Aurukun in Far North Queensland. Mrs Ngallametta’s Estate is represented by Martin Browne Contemporary.

Nyapanyapa Yunupingu’s survey exhibition Nyapanyapa is presented at the Museum and Art Gallery Northern Territory from April to October. The show charts the evolution of Yunupingu’s two-decade practice, which has consistently challenged the conventions of Yolŋu artmaking and established the artist firmly within the Australian Cannon. Yunupingu is represented by Roslyn Oxley9.

Monash University Museum of Art presents Agatha Gothe-Snape’s The Outcome is Certain until April – the first major survey exhibition of Gothe-Snape’s work. Curated by MUMA’s Senior Curator, Hannah Mathews, the show brings together key works from Gothe-Snape’s oeuvre from 2008 to the present.

From May to July, TarraWarra Museum of Art presents a solo exhibition of Canberra-based artist Heather B. Swann. Leda and the Swan sees the artist embark on immersive new work borne out of her contemporary reading of the ancient myth of Leda and the Swan. Swann is represented in Tasmania by Michael Bugeli Gallery. TarraWarra follows up with a dual show of new work by Judy Watson (represented by Tolarno and Milani galleries) and Yhonnie Scarce (represented by This Is No Fantasy) in November, curated by Hetti Perkins.

Wollongong Art Gallery presents eX de Medici’s solo show From the room of Dorian Gray from March to May (de Medici is represented by Sullivan+Strumpf), while Jacky Redgate’s major solo, HOLD ON, opens in March at Geelong Gallery. Redgate is represented by Melbourne’s Arc One.

Kūlī nām dharāyā / they’ve given you the name ‘coolie’ is a new exhibition of work by rising star Sancintya Mohini Simpson. Presented at Brisbane’s Institute of Modern Art from February to April, the exhibition’s title evokes the lived experiences of indentured labourers taken from India to Natal (now KwaZulu-Natal, South Africa) to work on sugar plantations during the late 1800s and early 1900s. Continuing to trace her familial history of indenture, Simpson creates a new archive that speaks to shared narratives of indentured labour. The artist’s work appeared on the cover of Art Collector’s Undiscovered issue last year.

And the Auckland Art Fair galleries are…
Scroll to top