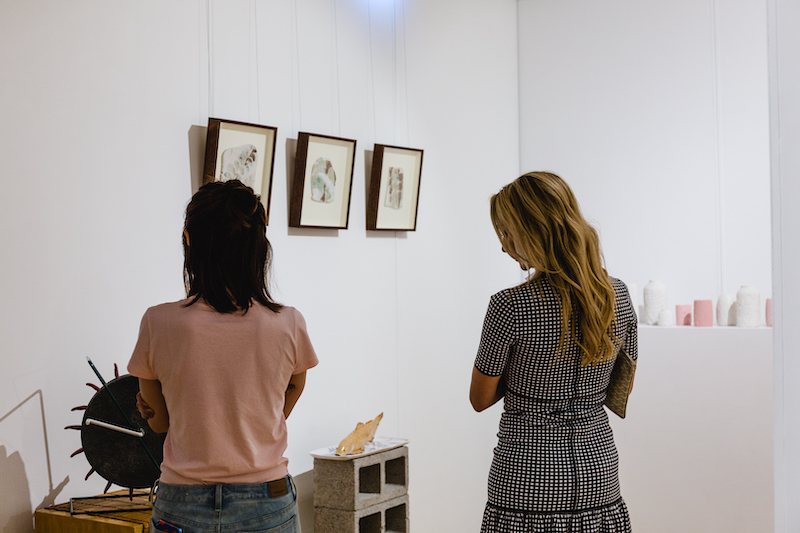 The creatives behind the collections talk exhibiting, collecting, and starting out.

At first glance, the world of art collecting seems to be shrouded in mystery. What draws a collector to an artwork? Why start a collection in the first place?

This year’s exhibition celebrates the feeling of joy that underlines the practice, as expressed in its name FINDERS, LOVERS, KEEPERS. More than the acquisition of art as an object, the 2020 Collectors’ Space explores the many paths of collecting through inspiration, feeling, knowledge, and material practice.

“Collecting is more than just buying art,” says this year’s curator Rowena Talacko. As the collection manager of the Laverty Collection, Talacko assists private collectors in areas such as catalogue management, installation, and storage.

Inspired by the breadth and diversity of the chosen collections, Talacko was also drawn into the collectors’ own stories and insights: “By contemplating these artworks and hearing the stories, perhaps others will forge pathways they hadn’t considered before.”

In light of the opening, we asked a few of the Collectors’ Space creatives to chat about their collections.

Nicki Townsend is an Australian Art specialist working with Michael Reid, who lives in Sydney with her family and husband Andy Martyr.

Tell us about the first work you ever collected?

I bought my first work when I received my first full-time pay cheque. I was working in a small gallery in Glebe Point Road and an artist called Wendy Sharpe was having her first exhibition. I purchased a work on paper, which I took the good part of the year to pay off. The frame is decorated by the artist. I still treasure it and could never part with it. It marked the beginning of my addiction.

What’s the work in your collection that means the most to you?

Our Richard Larter of Betsy, 1963. I had been admiring it for some time and my husband surprised me with it one Christmas. I was overwhelmed, and she always hangs somewhere I can see her most of the day. She was painted the year I came into the world.

Which artists are on your radar?

I always have a wish list. I find Richard Lewer and Heather B Swan. Lewer’s works both beautiful and probing at the same time. Swan’s works never cease to move me, almost to tears.

Noel McKenna at Darren Knight in May. Noel is a national treasure and his exhibitions never fail to delight. Also, Richard Lewer at Sullivan and Strumpf in March.

If you could steal any piece of art from a collection anywhere in the world, what would it be?

Picasso’s Two Women Running on the Beach, 1922. Simply because I would love to wake up feeling like this every day, and if not, be reminded to do so!

If you’re still thinking about it the next day, you probably need to own it. Buy what speaks to you and you love. Don’t over think it. Trust yourself.

Stephen Cassidy has worked for the last 26 years at Dedece Sydney, an importer of international contemporary and modern classic furniture and architectural design products. Richard Perram has had a long and varied career working in the arts. His roles include project officer at the Visual Art Board of the Australia Council, director of the Australian Centre for Contemporary Art (ACCA), Melbourne, executive officer of Arts Queensland, executiveofficer of the Sydney Gay & Lesbian Mardi Gras, and director of Bathurst Regional Art Gallery (BRAG) from 2004 to 2014.

How would you describe your collection in three words or less?

Tell us about the first work you ever collected?

The first work that we collected together was a sculptural wall piece made of plaster by Oliver Watts and Jasper Knight. The work was bought from the Sydney artist collective Wren Gallery in the late 1990’s and was a stylised head of Andy Warhol based on one of his late self-portraits.

Which artists are on your radar right now?

Daniel Hollier, Dale Buckley, Mark Booth and Lynne Eastaway – they seem to be the most interesting and deal with our interests about abstraction and non-objective art.

The 2020 Sydney Biennale entitled NIRIN curated by Brook Andrew that looks at art from First Nations people. It seems a long time between exhibitions since the Pompidou Centre in Paris in 1989 explored similar cultural interests in Magiciens de la terre.

Research in detail your area/s of interest, find a focus and enjoy the journey.

Patricia and Robert Postema are art collectors and creatives based in Sydney.

What are you doing when you’re not collecting art?

Outside the seemingly full-time job of attending public/private exhibitions and lectures, we are also passionate about attending the Opera, the Australian Brandenburg Orchestra, Bangarra Dance Company and, when time allows, movies.

How would you describe your collection in three words or less?

What’s the work in your collection that means the most to you?

That is almost impossible to answer! Almost all the collection has associations and meanings ranging from how and when it was purchased to why it was purchased. If pushed, we’d probably choose Ultrapilgrim by Juan Ford. It represents the millions of people on the move globally, and the baggage of modern life we carry around as a burden. It also has a wonderful use of light, and photorealistic style. Second, The Carcass Bearer by Sam Jinks because of the extraordinary skill and effort required to produce the work, its allegorical reference to loss and redemption, and its great pathos.

Which artists are on your radar right now and why?

To list a few emerging artists, we would nominate Mehwish Iqbal, Hoda Asfshar, Shireen Taweel, and Cigdem Aydemir for their socially and politically engaged works that are high impact both visually and conceptually.

What exhibitions are you excited about seeing this year and why?

The Biennale of Sydney, as we think the artistic director, Brook Andrew has put together a wonderful program. Sydney Contemporary acts as an exhibition with a broad range of contemporary art, and a fantastic vibe around the event. The Adelaide Biennial, to see how the selected artists respond to the timely theme of making visible the monsters of our time. Artspace Sydney also has a wonderful program lined up, which we are looking forward to.

If you could steal any piece of art from a collection anywhere in the world, what would it be and why?

Can we steal one each? Patricia would steal Anselm Kiefer’s Mohn und Gedachtnis (1989) especially for its materiality and its poignancy, including the paradox of beauty and tranquility in the sculptural form of the aircraft. Robert would steal AES+F’s Inverso Mundus for its technical wizardry and demonstration of how there is a place for time-based media even in a world saturated by video images. It also subverts the world that is at once apocalyptic and tranquil, violent yet bloodless, and that reverses the male dominated world into a female dominated world.