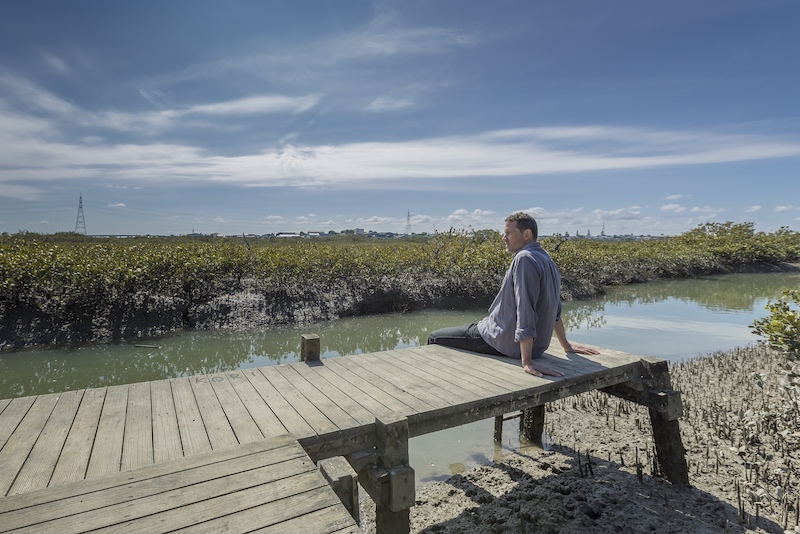 As far as Trans-Tasman artistic relations go, artist Julian Hooper is exemplary of the collegiate network between Australian and New Zealand audiences, given the artist’s collector base in both countries.

As far as Trans-Tasman artistic relations go, artist Julian Hooper is exemplary of the collegiate network between Australian and New Zealand audiences, given the artist’s collector base in both countries. He has held more than 20 solo exhibitions in Sydney, Melbourne and Auckland, as well as New York. His work was featured in Necessary Distraction: A Painting Show, a survey of contemporary New Zealand painting at the Auckland Art Gallery Toi o Tamaki in 2015. He was too featured in GOMA10, Queensland, a survey of the gallery’s first decade in 2016.

In New Zealand Hooper is commercially represented by Ivan Anthony Gallery, and in Sydney by Gallery 9, with whom he showed at Sydney Contemporary and in an exhibition entitled Blind Love last year. As a collection, Blind Love marked something of a departure for Hooper in terms of composition. The artist is best described as an abstract painter and yet he admits that his work explores elements of figuration too. With Blind Love Hooper seemed to be describing a new language for himself, while also literally employing text. Read as a whole, the restrained black and white acrylic on canvas paintings translated as a kind of autobiography, culminating in the painting entitled Self Portrait with its representation of the word ‘ME.”

In looking at Hooper’s considerable oeuvre it is difficult to discern a clear aesthetic. His work is constantly evolving, often within the one exhibition. Here it is pared back, spare, a study in restraint, a wandering line drawing; elsewhere paintings explore three dimensional forms reminiscent of oscillating computer patterns, (Tubular Bells anyone?), and 1970s abstraction. This variation in theme is further amplified by his technique of layering canvases.

He explains, “I have been working on pieces of loose canvas, then fixing these onto stretched canvas supports. The first stage feels like drawing, free, like working on paper. Then the work invades painting territory. Images are based on abstract ideas of form and pattern, but they are also heads and faces. I have also been using letters and words as elements in images. These operate the same way as the other forms, flickering between abstraction and representation, but the words also have a symbolic reading. The paintings are open and interpretive, but they are suggestive of personalities and relationships.” Everything is, and is not what you see.

“Recently I have been making hundreds of line drawings to find new images. I have been translating some of the images into painted objects, mainly using black and warm white monochrome, and linear or flat graphic forms. I want to preserve the reductivity of drawing, but also gain a physical property through the use of painting materials,” says the artist, “I have long been interested in ways that abstraction and figuration can work on each other. I like the formal and expressive possibilities that can result by bringing these two concerns together. My practice is quite cyclical. Some concerns will fall away for a while, and others will come back.” Hooper’s project is as serious as it is disciplined. There is much consideration of form and content but also intent. He adds, “Interestingly, I feel more aware of the painting as object. This is partly because of the very physical process of gluing down, the two layers of canvas drawing attention to the construction of the painting. Maybe also because the images are still kind of drawings. They ask ‘Am I a painting?’ They have a dependence on the physical structure.” Indeed, what is a painting? Hooper’s small works, for scale too is important for the artist, pack a powerfully considered punch.