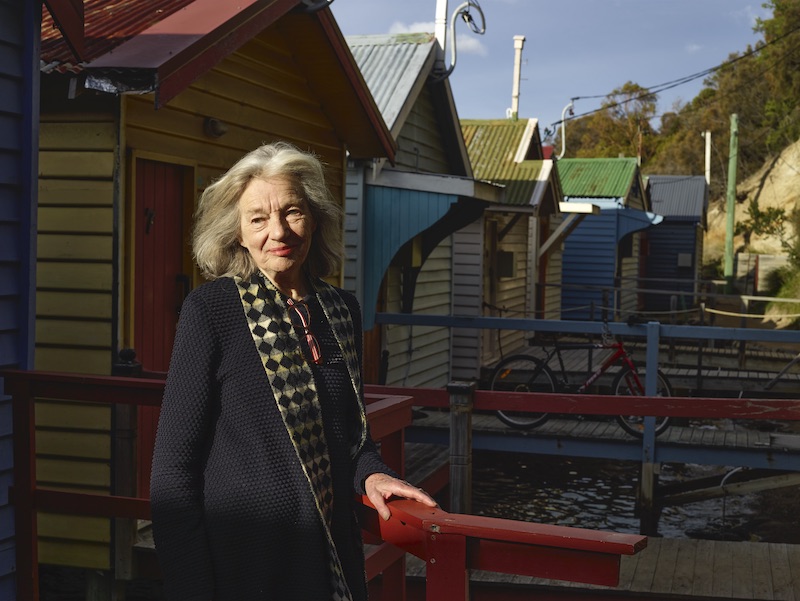 Pat Brassington: Something beautiful & its antithesis

Coming to art as a mature-age student, Pat Brassington has since established herself as one of the most important Australian artists working today.

Perhaps the best thing I’ve read on Pat Brassington is by academic Robyn Ferrell on the occasion of Brassington’s 2017 the body electric show at the Art Gallery of New South Wales. Ferrell writes of the difficulty of writing on Brassington at this stage of her career, after all the usual feminist, Surrealist and psychoanalytic things have been said about her. There remains something else about the work that isn’t quite these, a kind of obdurate resistance to it being read and explained altogether. Brassington’s images are strangely mute and even withdrawn, for all of their apparently provocative content. There is another impulse or motivation we can see behind them, one that goes beyond their iconography of dreams, fantasies and imaginings to explore the formal properties of photography.

We – this is me, not Ferrell – might even call it classicising. Brassington’s images are before all else – and this tendency has developed as her work has gone on – elegant, refined, composed and calculated. For her forthcoming show at Bett Gallery in Hobart, the three objects that make up And It Came to Pass (2020) each sit beautifully alone in their frame (even the dangling horse seems just right). And that is the point of the work.

Brassington began studying photography at the Tasmanian School of Art in 1986, enrolling as a mature-age student. Her first solo exhibition at Chameleon Contemporary Art Space (later Contemporary Art Tasmania) in Hobart in 1986 – Brassington has continued to live and work in Hobart throughout her career – although strikingly Surrealist, also evidenced an assured formal composure. We see this as well in Cumulus Analysis (1986–87), now in the collection of the Art Gallery of New South Wales, which subordinates its grand guignol content to the arrangement of the individual photographs that make it up.

Brassington showed regularly throughout the 1990s and 2000s, steadily gaining critical and curatorial attention. Another important Brassington commentator, Edward Colless, was to call her work a form of “Tasmanian Gothic”, although he was later to emphasise what he saw as the work’s puzzle-like or even permutational quality, the way the same elements get successively reused in different combinations throughout her oeuvre. As he was memorably to put it: “To decode the patterns of correspondences as if they were symbolic would be like trying to psychoanalyse the window of a tumble dryer”.

Again, here what we might see as important from the perspective of Brassington’s recent work is the de-emphasis on the psychological aspect of the work – the idea that what it seeks to convey is something like Surrealist shock. Indeed, pushing further Colless’ insight as to the seeming arbitrariness of Brassington’s work, we might suggest that in fact considerable effort is involved in preventing these conventional and by now exhausted expectations being placed on her photographs. Instead, the real challenge Brassington gives herself is how to take her psychically loaded subject matter and allow us to see it in its own terms, for its inherent formal beauty.

Of course, Brassington began with the usual rollcall of Surrealist and pre-Surrealist influences and antecedents. In an interview for her 2012 Australian Centre for Contemporary Art (ACCA) retrospective À Rebours, she mentions, amongst others, Goya, Giacometti, Fuseli, Magritte and Ernst as inspiration. And subsequent commentators have not been hesitant in also ascribing Eva Hesse, Louise Bourgeoise, Cindy Sherman and Silvia Kolbowski.

But as Brassington has gone on, there has been a gradual attenuation of the Surrealist influence and growing distance from the once comparable projects of her peers. Take, for instance, Brassington’s Blush (2014), now in the collection of the National Gallery of Victoria. It cannot but remind us of something like Pierre Molinier’s La rose noire (1960), in which the artist dressed in high heels and stockings inserts a black rose up his anus. But in Brassington’s version, all obvious sexual content is drained away. Or take Combed and Brushed (both 2020) from the forthcoming show at Bett. Again, they cannot but remind us of Man Ray’s superbly iconoclastic Prayer (1930), but here instead of bent-over body and erotic shadows Brassington simply wants us to observe the beauty of the curves of the woman’s back, and the combed and brushed hair sits inertly rather than sexually on top.

Maybe the turning point in Brassington’s career was in fact the À Rebours show at ACCA, which featured a provocatively inert hang – for which it was criticised – and used the scale and orthodoxies of the museum retrospective to bring out the long-running iconographic (and not so much psychological) connections between the works.

Brassington is undoubtedly one of Australia’s more important older-generation artists. If I were allowed a left-field comparison, I’d compare her to, of all people, Gareth Sansom. There is the same in-your-face sensuous and psychically charged subject matter, but behind it lies an extraordinarily refined and self-challenging organisational principle. As she puts it herself in an online interview for À Rebours: “I am walking the fine line between something that is beautiful and its antithesis.”

Virtually from the beginning of her career, her work has been curated, collected and exhibited by our various state and national galleries. For a typical mid-period work, see The Gift (1996), which in some ways is a vertically arranged version of Cumulus Analysis, at the Art Gallery of South Australia. For a good later-period work see the precariously gangling untitled coathanger from the Cambridge Road series (2007) at the Queensland Art Gallery.

For things to read on her work, start with the catalogue for the ACCA retrospective with essays by Juliana Engberg and Edward Colless and Anne Marsh’s A Surrealist Impulse in Contemporary Australian Photography (2006).

Brassington is represented by Bett Gallery in Hobart and ARC ONE Gallery in Melbourne, and the first-time collector should note that her work is usually made in editions of four to six. (Brassington has not only incorporated the formal possibilities opened up by digital photography, but also something of its reproductive logic.)

Altogether we would say that Brassington has invented something of a “late style” Surrealism: a surrealism of method not subject matter. What does it mean, for instance, that we have previously seen that floating figure holding a stick in Brassington’s All in a Dream (2020) in her earlier A Perfect Day (2009)? Is not Brassington’s work living its own after-life, a certain after-life of Surrealism?

March 31, 2022
Blood sculptures that melt in the warm air on opening night, chewing gum soldiers that visitors tread across the gallery floor and jaffas that melt into hair gel are all exchanges of substances that are part of the process in Tim Silver’s artworks. To Edward Colless they form a poetic theme of sickening, contaminating love like the kiss of a vampire.
END_OF_DOCUMENT_TOKEN_TO_BE_REPLACED
https://artcollector.net.au/wp-content/uploads/2022/03/Tim_Silver-1_1-800q.jpg 531 531 AdrianaBorsey https://artcollector.net.au/wp-content/uploads/2021/11/Art-Collector-logos-transparency-WHITE-1080x1080px-2.png AdrianaBorsey2022-03-31 15:44:352022-03-31 15:44:35Artist Profile: Tim Silver

March 31, 2022
Makinti Napanangka, now over 70 years old, paints on the ground in the open air hunched over her canvas, her brushstrokes confident and instinctive. The efforts of her day’s work are eagerly sought by institutions and collectors all over the world. Jennifer Isaacs visited this prominent desert painter’s remote home base at Kintore, to watch her work.
END_OF_DOCUMENT_TOKEN_TO_BE_REPLACED
https://artcollector.net.au/wp-content/uploads/2022/03/Makinti2-800-sq.jpg 545 545 AdrianaBorsey https://artcollector.net.au/wp-content/uploads/2021/11/Art-Collector-logos-transparency-WHITE-1080x1080px-2.png AdrianaBorsey2022-03-31 15:25:222022-03-31 15:25:22Artist Profile: Makinti Napanangka

Cigdem Aydemir: Beyond the veil
Scroll to top