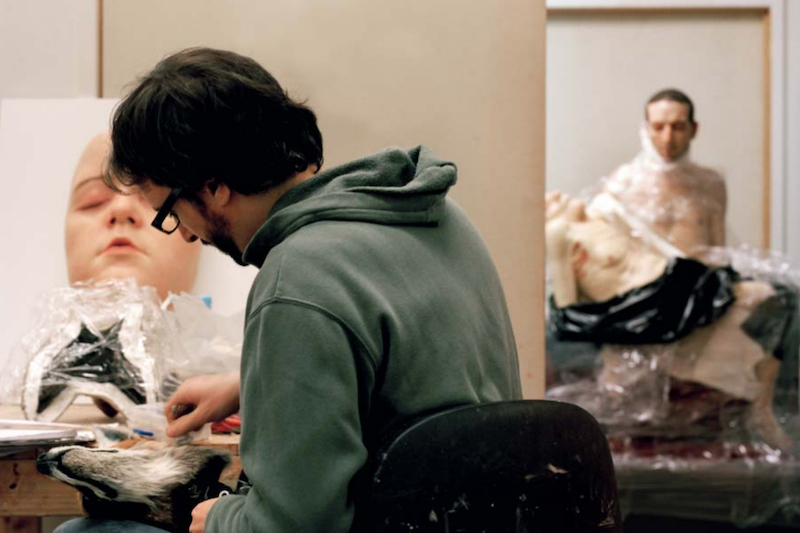 Realist sculptor Sam Jinks would prefer not to be known for his virtuosity, but for creating quietly powerful works that actually mean something, writes John McDonald. With audiences known to cry in front of his works, he’s on the right track.

I like the idea that you can make something precious and powerful,” says Sam Jinks, “a work that actually means something – not in the context of a moment, but in a bigger sense.”

If this sounds like a deeply spiritual quest, Jinks swears he is not religious. He is more concerned that a viewer should be moved or touched by his disconcertingly realistic sculptures, rather than be wowed by their technical expertise. He would enjoy seeing his works displayed in a church, or some other building with a powerful symbolic purpose. To see these sculptures in a sacred space would provide a much better index of Jinks’s artistic ambitions.

“I would love it if someone purchased one of my works because they connected with it in some way, or felt moved by it,” he says. On the other hand, he finds it disturbing that people are now queuing up to buy things they haven’t actually seen.

Jinks is, by his own admission, new to the art world, and still trying to adjust. Until about three years ago his work was widely known, but the creator was virtually anonymous. Jinks was the master technician who helped bring Patricia Piccinini’s silicon sculptures of genetic mutations into the world. His handiwork may be seen in Piccinini’s The Young Family and associated pieces, which were exhibited at the 2003 Venice Biennale and other prestigious venues.

Nowadays, that seems like a long time ago. Jinks is grateful for the years he spent working for Piccinini because, in order to realise her ideas, he had to keep attached to experimenting with materials and acquiring new skills.

Although they have remained friendly and still inhabit the same Collingwood factory, by the time their association ended he says they had developed quite opposite views on sculpture.

By his early thirties, Jinks had reached the point where he had to go his own way. He had worked as a motorcycle courier, an illustrator, and learnt his sculptural skills preparing props for the advertising and film industries. The years with Piccinini were a finishing school, during which he stockpiled ideas. Now he is making those works, but the process is so slow and painstaking, the level of detail so exacting, that he can barely keep up with the demand. In preparation for his October show at Karen Woodbury Gallery in Melbourne, there was hardly a day in months when he wasn’t in the studio. One entire week was spent inserting hairs into a coyote head that would be attached to a human body.

One can tell that Jinks is new to the art world, because he is disarmingly modest and straightforward. To hear him talk about his work anyone would think he was the clumsiest of amateurs. He is full of admiration for Ron Mueck and other realist sculptors, and keeps saying how much he has to learn. “The guys who are working for Patricia Piccinini now,” he says, “are doing much nicer stuff than I ever did.”

This would be news to those viewers who have stood in front of Jinks’s sculptures in private and public galleries, and been astonished at their lifelike appearance, but also by their air of fragility and vulnerability. Jinks is deeply committed to the human form, which he describes as “a physics lesson in a ball of bones and meat”. Like Ron Mueck, he plays with scale, making his figures and faces unnaturally large or small, to dramatic effect.

Jinks avoids portraiture by building up his figures from different aspects of many people. He admits though, there is an element of self-portraiture in all these works, reflecting the fact that he often feels a little vulnerable himself. One might also say these sculptures display a sense of humanism and compassion that is quite exceptional in a milieu where many artists feel they have to be sensational in order to be noticed.

While Jinks swears he would never make a sculpture of a “normal” person, it is the small deviations from the norm that give his work such a powerful presence. The more closely he observes the world around him, the more subjects he finds.

“When I was young,” he says, “I thought the world must be really strange, with aliens and things. When you get to your early twenties you think, ‘Ah, it’s not like that at all.’ Now, in my thirties, I’m thinking that maybe the world is stranger and weirder than I ever imagined it could be.”

Sam Jinks will be exhibiting at Karen Woodbury Gallery in Melbourne from 8 October to 1 November 2008.

March 31, 2022
Blood sculptures that melt in the warm air on opening night, chewing gum soldiers that visitors tread across the gallery floor and jaffas that melt into hair gel are all exchanges of substances that are part of the process in Tim Silver’s artworks. To Edward Colless they form a poetic theme of sickening, contaminating love like the kiss of a vampire.
END_OF_DOCUMENT_TOKEN_TO_BE_REPLACED
https://artcollector.net.au/wp-content/uploads/2022/03/Tim_Silver-1_1-800q.jpg 531 531 AdrianaBorsey https://artcollector.net.au/wp-content/uploads/2021/11/Art-Collector-logos-transparency-WHITE-1080x1080px-2.png AdrianaBorsey2022-03-31 15:44:352022-03-31 15:44:35Artist Profile: Tim Silver

March 31, 2022
Makinti Napanangka, now over 70 years old, paints on the ground in the open air hunched over her canvas, her brushstrokes confident and instinctive. The efforts of her day’s work are eagerly sought by institutions and collectors all over the world. Jennifer Isaacs visited this prominent desert painter’s remote home base at Kintore, to watch her work.
END_OF_DOCUMENT_TOKEN_TO_BE_REPLACED
https://artcollector.net.au/wp-content/uploads/2022/03/Makinti2-800-sq.jpg 545 545 AdrianaBorsey https://artcollector.net.au/wp-content/uploads/2021/11/Art-Collector-logos-transparency-WHITE-1080x1080px-2.png AdrianaBorsey2022-03-31 15:25:222022-03-31 15:25:22Artist Profile: Makinti Napanangka