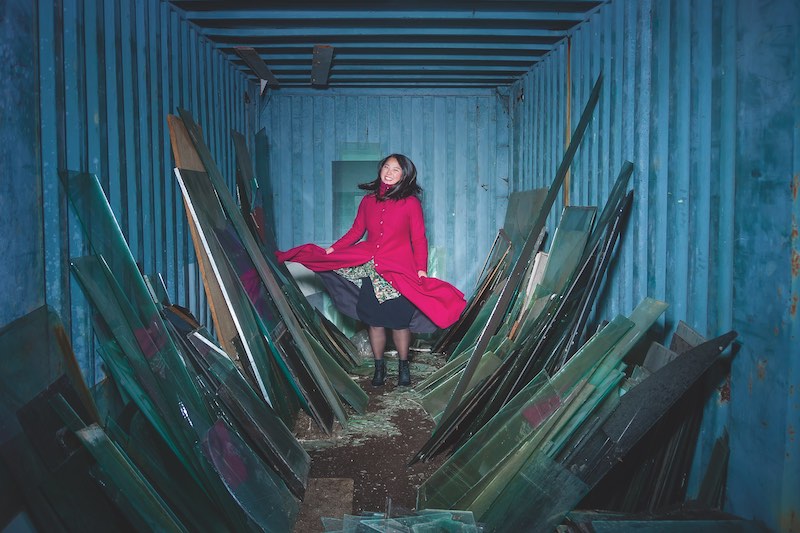 In high school when an art teacher told Suji Park that she “worked with serendipity” she didn’t really know what that meant. However, the words echoed in her head a few years later when on the eve of a show at Auckland’s artist-run space Ferrari someone broke her ceramic exhibition piece. “I was so upset, really angry! This was the best thing I had ever done,” says Park with a wry smile.

She now looks on that painful incident as a turning point. Park, who was in her final year at Elam School of Fine Arts, took the smashed work back to the masters studio and honed in on the layers that had been serendipitously revealed by the breakage. “Breaking work has become a crucial part of my work now,” says Park. “It’s an exciting moment when I can let go.”

At that stage Park had already been garnering attention and holding solo shows of her works that were at once figurative and otherworldly. Inspired by funerary vessels, the meticulously detailed ceramic forms evoked forgotten ancient relics. For her graduate show at the end of 2013 Park’s work took a leap into the abstract and she began working on a larger scale incorporating industrial foam, glass, plastic, mica, concrete.

Two years on, the rain is hammering on the iron roof of Park’s warehouse studio in Henderson, West Auckland where she is preparing for her upcoming solo show at Brett McDowell Gallery in Dunedin. Park is using clay, which she calls her drawing medium, to make a tall conical vessel. She knows full well it will break. It’s made from different types of stoneware that refuse to fuse. “I’m playing with the material itself and pushing the limits.”

Once the work is fired and the cracks revealed, Park says she views it as a found object and adds layers on top. The range of materials making their way into Park’s work is ever increasing. Among the auto body shops and rail yards surrounding the studio she finds herself in an enclave of artists with ready access to workshops on new techniques. She’s also discovered nearby Crystal Mountain, her source of iridescent manmade crystals that look both primal and space age. In recent works she has set clay and crystals inside blocks of resin, a kind of fossilisation of the organic within the inorganic.

Because Park shows in a gallery format, she feels much of the very active process of her work is lost. That will change when she takes up the McCahon House Residency up the road in Titirangi in September. With the help of a Creative New Zealand grant Park is making a book intended to be a work in itself, documenting each stage of her process with photographs and writings. She is just back from a research trip to her native Korea where the book will be printed. Park was 12 when her family moved from Seoul to Auckland. It remains her home of sorts, belonging to another time of her life. For now, her roots are in Auckland. “I think this is my home but Korea is a world that I would like to experience one day as well. I only know this as a child.”

As well as a bold pursuit of change and chance in Park’s work, there is a uniting thread of continuity, close to spiritual connection. Much to her amazement, collectors have a knack for detecting this. Park has never made a conscious step away from figurative forms and they do remerge – although their appearance is not always easy to bear. ”I experience dread and become really anxious,” says Park. “It’s more emotional to do figures. It’s a strange feeling. It’s almost like conversation or prayer, although I’m not really religious.”

When she makes figures, Park thinks of them as generationally connected. She will create a mother or child figure of one that has come before. “Sometimes, somehow, collectors can see that and the same person has three different generations,” says Park. “That’s amazing.”

The inadvertent nature of her practice continues long after it’s constructed. Garden (2015), which was exhibited in Headland Sculpture on the Gulf at Waiheke Island early this year included buried ceramic vessels that she later dug up and hung in the group show Five by Five: New Conversations with Clay at the Auckland public gallery Te Uru.

“It’s funny how these works have their own kind of life. They get turned upside down, buried underground, broken and then become something else. It’s never planned. And that’s the fun part for me. It’s like a rediscovery every time.”

A month out from her solo show at Brett McDowell Gallery, Park is yet to have a title for the exhibition but this assured 30-year-old artist has a strong sense of where she’s at. The work, says Park, revisits everything she has done so far, while being completely new. “It’s present tense. It’s looking back and looking forward.”

March 31, 2022
Blood sculptures that melt in the warm air on opening night, chewing gum soldiers that visitors tread across the gallery floor and jaffas that melt into hair gel are all exchanges of substances that are part of the process in Tim Silver’s artworks. To Edward Colless they form a poetic theme of sickening, contaminating love like the kiss of a vampire.
END_OF_DOCUMENT_TOKEN_TO_BE_REPLACED
https://artcollector.net.au/wp-content/uploads/2022/03/Tim_Silver-1_1-800q.jpg 531 531 JulietManolias https://artcollector.net.au/wp-content/uploads/2021/11/Art-Collector-logos-transparency-WHITE-1080x1080px-2.png JulietManolias2022-03-31 15:44:352022-03-31 15:44:35Artist Profile: Tim Silver

March 31, 2022
Makinti Napanangka, now over 70 years old, paints on the ground in the open air hunched over her canvas, her brushstrokes confident and instinctive. The efforts of her day’s work are eagerly sought by institutions and collectors all over the world. Jennifer Isaacs visited this prominent desert painter’s remote home base at Kintore, to watch her work.
END_OF_DOCUMENT_TOKEN_TO_BE_REPLACED
https://artcollector.net.au/wp-content/uploads/2022/03/Makinti2-800-sq.jpg 545 545 JulietManolias https://artcollector.net.au/wp-content/uploads/2021/11/Art-Collector-logos-transparency-WHITE-1080x1080px-2.png JulietManolias2022-03-31 15:25:222022-03-31 15:25:22Artist Profile: Makinti Napanangka

The Other Art Fair returns to Melbourne
Scroll to top