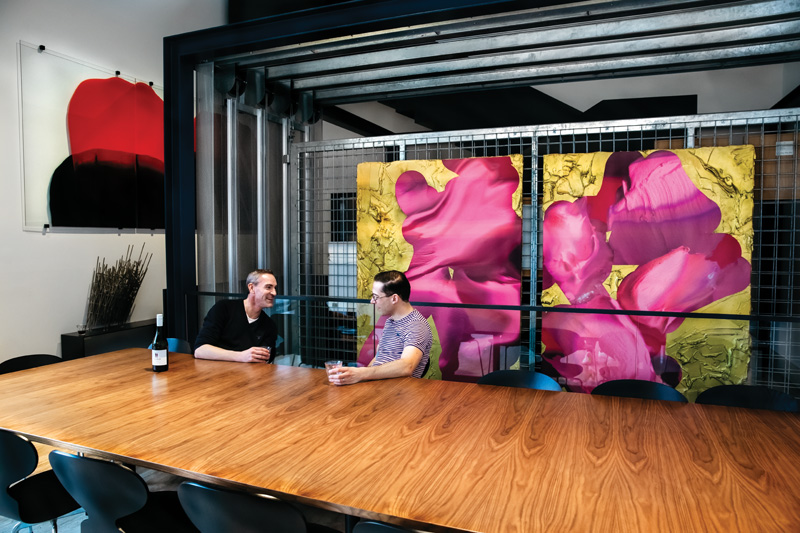 The double-sided, moveable art racks rotating throughout the five internal floors of Peter Wilson and James Emmett’s Sydney warehouse tell but a part of a life’s story fuelled by art.

Peter Wilson and his partner James Emmett are at the top of their respective fields in finance and the law. Professionally they are busy and serious. Privately they give their time to arts bodies and other not for profit organisations where they think they can help. They also like to party, and their new home was designed just for this purpose.

We roam over the five-level warehouse Wilson and Emmet have converted into a remarkable home in one of Sydney’s edgiest inner suburbs. Their home is high-tech; music, lighting and three video screening sites are controlled room-by- room via a mobile phone. An internal elevator (installed at the insistence of their mothers) complete with a padded blue leather interior, while an Agatha Gothe-Snape work connects the four-floor home. But certainly, the most arresting feature of the property is the double-sided moveable art racks, four of them, that rotate vertically through all internal floors.

The racks are variously described. Wilson says it is an “Art machine” while Emmett, with a smile (and much to his partner’s chagrin) gives it the handle: “The dumb curator.” The industrial looking machine that owes its design origins to the theatre stage is so cool, and so necessary. Wilson and Emmett are keen art collectors. They have been in their new digs for a year and say they are ready for a rehang. Six large works, by their friend Julian Meagher wait bubble wrapped in storage, returned from loan for an exhibition at Penrith.

After their three-year search across Surry Hills, East Sydney and Chippendale for a suitable warehouse the couple “lucked across this place,” says Emmett. Architect Matthew Bennett, a friend from Emmett’ time at Harvard, was given the job. Wilson recalls their initial brief to Bennett, was indeed brief, “room for guests and a party”, Emmett chips in “and we had run out of wall space.” “We just let him do what he wanted to do,” Wilson adds. “It was such a joyful process.”

Involvement with not-for-profit organisations is also a source of joy for the two men. Wilson is Chair of Playwriting Australia and sits on the boards of Belvoir Street Theatre Company, Women’s College, The Sisters Of Mercy and Artspace. Emmett is Chair of National Association for the Visual Arts (NAVA), the peak body of Australia’s visual arts sector.

Art is in abundance on the home front. “Painting, figurative work and craft,” according to Wilson are their go-tos; although glass, sculpture and video art also feature. Two works by Stephen Bush have pride of place in the sitting room. In the bedroom an Alex Seton sculpture and anAlexander McKenzie oil painting seem to peacefully converse. On one of the moveable racks is a salon hang of 12 works that includes fine portraits of Emmett’ Grandmother and Great Great Aunt, hanging beside a portrait in pencil of Wilson – as the devil – drawn by a friend for their HSC submission. Here also are two works Wilson bought as a “baby lawyer” – they are by Peter D. Cole. In lieu of paying bonuses, the firm Wilson was working for bought the works. The pair subsequently purchased two sculptures by Cole; one, a nativity scene, was commissioned.

The commissioned nativity scene is a useful indicator of Emmett and Wilson’s ability to compromise. “I love Christmas,” Emmett says. “Left to my own devices the place would be bedecked with endless awful decorations.” Wilson rolls his eyes at the thought and offers that the work is the ONLY acceptable decoration allowed in the house, and is only allowed out of the cupboard for one month. Which brings the obvious question about how they have gone about selection works for their collection. “The theoretical rule is we have to both like it,” says Wilson. Barrister Emmett in very legalese speech says, “there is a rarely exercised, no-questions-entitled, right to a veto.”

Emmett and Wilson have now been together for 19 years. “In a very real sense, our aesthetic tastes grew into one another,” Emmett offers. “The image we have – not just for our taste in art – but for our life generally is from a novel by Stella Gibbons. Two people from very different worlds run away together and a wise old grandmother says that they will be fine, because they have puppy bones and will grow into each other.” Wilson says, “I’m not sure that we had puppy bones, but we were certainly puppies; like a Labrador with big feet.”

Sydney Contemporary out on the town
Scroll to top