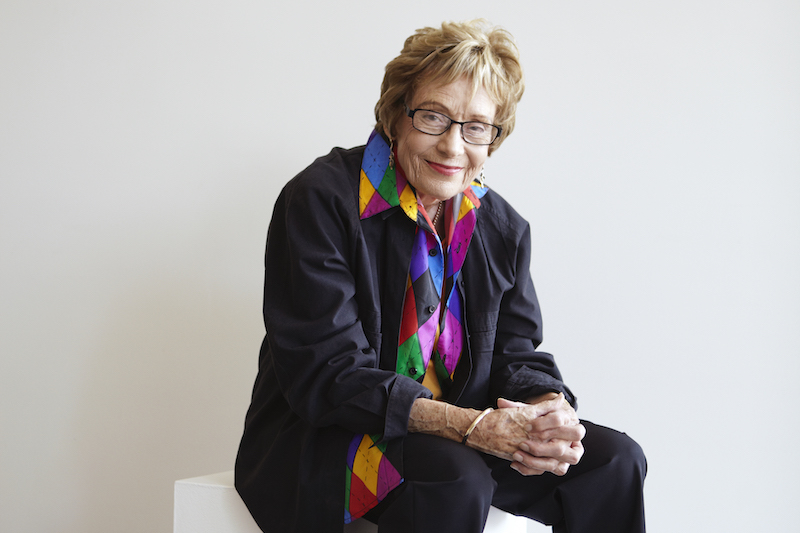 Yvonne Audette’s remarkable six-decade career is part of the history of abstraction in Australia. Recognition may have come slowly but was ultimately undeniable. There is an ever present power in her work, a power grounded in oblique hints at what lies beneath, gone beyond recall.

After five days this January of chronically obstinate and desiccating heat arrogantly perched over 40 degrees, and with the still vivid memory of the climax to the fierce 2009 summer when – beneath an apocalyptic black and burning sky – firefighters had banged on her front door to warn of evacuation, Yvonne Audette quietly packed a bag and got out. This time the large studio attached to her house secluded in forest high in the picturesque Dandenong Ranges had already been emptied, its prolific stock of new paintings trucked down to safe storage in Melbourne to wait for her next exhibition, in May at Mossgreen Gallery. Hearing of the fire-front taking its toll, even way off to the east, she decided to follow the work down to the city.

“Every summer there are fires up here, often lit by arsonists,” she stoically reflects, “but I fell in love with this place as soon as I first saw it – the patchwork of light and colour, the extent of space and its transparent depth. I can see south all the way down over the Mornington Peninsula.” Liaison with countryside that can open onto remote silence or ignite with the aggressive thunder of a solar furnace is more usually the bait for artists drawn to an untenanted outback. Even with the annual flames, Audette’s enviable inspiring view across outer metropolitan bushland is, however, hospitably urbane and long-term conjugal. It was love at first sight back in 1970, only a few years after she returned to Australia, freighting back an expatriate career decisively forged in the cosmopolitan régimes of the international modernist vanguard.

Audette started this career in Sydney as a teenager when, upon leaving a comfortably prosperous family nest in 1948, she migrated into the bohemian coterie of Kings Cross (and a lifestyle that included modelling for photographers Max Dupain and David Moore). During this time she was mentored artistically by the reclusive Godfrey Miller, whose ascetic theosophical quest to transcribe an abstracted, scintillating cosmological form (implicated even within a domestic view onto a harbourside park), would provide a meditative if not metaphysical orientation for her own work. Her art was also, in this germinal stage, inflected with a traditional but enduring discipline in life drawing (she still teaches drawing today); and although from early on she makes non-objective analogies between visual and musical composition, primed by her own training at the piano, her painting’s mission is more like the recording of a secular sort of illumination (if written with an unsettled, toothed and inquisitive script like that of another of her artistic spurs, Paul Klee) rather than the distilled modulation of feeling and form.

Under this impetus, but going in the opposite direction to most young Australians at the time, Audette moved at 22 to New York, studying first at the Art Students’ League and then, having been awarded a prestigious Fogg Scholarship, at the National Academy of Art and Design. She quickly found an affinity and also a buoyant fluency with the style of spontaneous and spacious gestural abstraction then, in 1952, on the boil in New York, mixing confidently as a peer with artists such as Franz Kline and Willem de Kooning and later with that high priest of modernist art criticism Clement Greenberg.

Then, again in a direction seemingly opposite to the popular tide, in 1955 Audette sailed out of New York for Europe where, apart from odd visits back to the States and Australia, she stayed until 1966. Europe – and notably Florence, Rome and Milan, in which she lived and worked most of this time – fuelled her with a vivacious cocktail of chic as well as patinated old world tradition, but it was also undergoing bracing economic reconstruction and audacious cultural innovation. Intelligently and ambitiously conversant in the European trends of modernist abstraction, Audette briskly got involved with the Milanese avant garde faction of arte concreta, sought out Cy Twombly en route to the Venice Biennale and the radical Lucio Fontana (who was stabbing and slicing canvases of flat colour), and by the 1960s was competitively contributing through a string of solo exhibitions to the emergence a distinctive Italian dialect of art informel. Don’t think of her work of this period, as some critics do, as an ethereal musical sensation; it’s more like an elegant noise: a material bustle of abraded history and fresh collisions, of flaking stucco and graffiti grime.

This story isn’t just about being in the right place at the right time. Audette not only had the wits to go where the action was. She was also acutely sensitive – or susceptible – to the artistic scenes she connected with at her destinations, and showed astute ambition when grasping their challenges. Yet surprisingly – with the exception of a handful of reviews and academic articles – the Australian art establishment for decades after her return dismissed this singular and precocious career. Admittedly, a culture war of sorts had taken hold in Australia in the 1970s in which modes of modernist abstraction (post-painterly, colour field, lyrical) were facing challenges from what was then being marshalled as post-object art (performative and conceptual) as well as politically explicit, figurative poster and mural art. It took almost 30 years before she regained the stage with a superb survey exhibition, curated by Julie Ewington at the Queensland Art Gallery, in 1999 and a lavish, scholarly monograph by Macmillan in 2003 (republished this year, and being launched at the Mossgreen exhibition).

Audette, of course, has never withdrawn from art. But if her artistic preoccupation for the past 40 years has been with her mountain retreat, this is at a polar opposite to those artistic refuges sporting idiosyncratically obsessive vistas, such as Cézanne’s Mont Sainte-Victoire or Arthur Boyd’s Pulpit Rock. Instead of trying to crack some hermetic geometry or summon the genius loci from the scenery, Audette’s strategy is – as it has been – ambiguity, allusion and the oblique; and what she obliquely looks onto is an accretion and abrasion of time. Back in 1968, reviewing her Australian debut show at Bonython’s in Sydney, an awe-struck James Gleeson described her paintings insightfully as “crystallisations of time”: palimpsests populated by phantoms, by imperfect erasures or pentimenti, and unknown ciphers beneath which lurk “at the furthest reaches, the totally ambiguous remnants of something gone beyond all hope of recall”. At her best, there wasn’t and still isn’t anything vaporous or foggy about this elusive annulment of memory, nor anything indolent or enervated by this cryptic inducement of an abyss beneath her signature marks. Audette tenaciously grounds her meditative calligraphic accents, as well as her oscillating colour masses and masks, in compressed fresco-like material surfaces, intimately scrutinised by being knifed onto and scraped or rubbed back or etched and scored. But one still feels the creep of an unconscious, immemorial and unfathomable earth distantly below.

Yvonne Audette exhibits at Mossgreen Gallery in Melbourne from 17 May to 14 June 2014.

The work of abstract artist Yvonne Audette is going though a process of rediscovery. During her early career in the 1950s and 1960s the artist was relatively unsuccessful commercially but, according to the managing director of Mossgreen, Paul Sumner, this was because “she really stuck to her guns. She never changed her style to suit the market. She waited for the market to come round to her which is a very purist way to do it.” With her works from the 1960s now extremely sought after, on average her oil works range from about $20,000 to $50,000 with works on paper at around $6,000 to $12,000, and prices are going up all the time.

Internationally, Audette was the only Australian artist included in an exhibition at the New York Guggenheim that focused on abstraction which, according to Sumner, “was pretty significant and I think it’s very telling”. Being a woman and an Australian at that time in America held its own set of problems and saw the artist ensconced in what Sumner terms “the Bermuda Triangle”. He elaborates: “She painted with some of the leading names of the day in American abstract expressionism … but if you weren’t in Australia, you weren’t on the horizon.” Clearly not the case anymore, a recent acquisition of one of Audette’s major works by the National Gallery of Victoria for $150,000 and another to the Tarrawarra Museum of Art in the region of about $65,000 is evidence that the artist is finally receiving the recognition she deserves.

If you ask art critic Christopher Heathcote why Yvonne Audette’s work is important, he will very succinctly and decidedly inform you that it’s because it’s good. When pressed, he will elaborate and comment that it’s very good. In his mind Audette’s work is so proficient that no greater explanation is necessary. “When you say an artist is good or their work is good, people always ask why. In the art game we’re immediately challenged and go on the defensive. She’s a very proficient artist and the work is simply good.”

Having discovered Audette’s work while working as an art critic for The Age in the early 1990s, Heathcote was seeing sometimes two dozen shows a week. He discovered that “you cast off some things and pay attention to others. Her work just jumped out, it stood out.” Perhaps this is why, in 2003, Heathcote co-wrote a monograph on Audette’s work, most of which had largely been ignored throughout her early career in the 1950s to 1970s. An artist ahead of her time, she was part of what Heathcote describes as the “first wave” of abstraction in Sydney, along with other artists such as John Olsen, Audette pioneered abstraction in Australia. However, unlike her colleagues, her work went unnoticed for decades and it’s this oversight which forms the premise of the monograph. For Heathcote it was important to tell her story and shed light on the work of female artists during this early period.