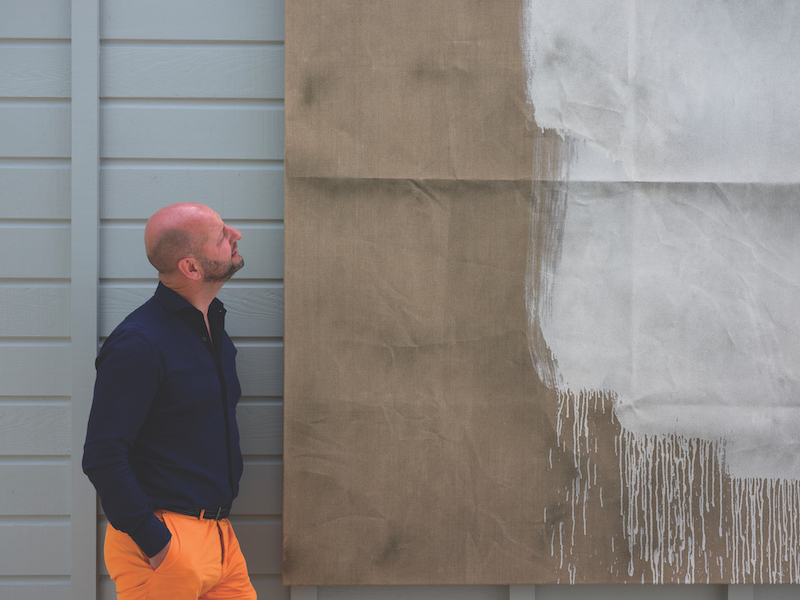 The Gardner Family: A Rather Special Story

The Gardner family’s art collection on Auckland’s Waiheke Island is a rare glimpse at the work of New Zealand’s undiscovered artists.

IT’S A CLICHE: the visitor to a home wandering around, glass in hand, ticking off the familiar artist names, showing off knowledge. Private art collections in this way can sometimes be pretty cookie cutter.

Not the Gardner family’s collection. Anyone lucky enough to visit their secluded holiday home – hanging above a cove at the remote end of Waiheke Island, Auckland – would be frequently stumped as well as impressed. In a collection of 66 artworks, there are many young artists the dealers have yet to discover, under-appreciated established artists and an impressive roster of the acclaimed.

It’s the result of a unique situation. With experience in art curating, law and project management, Belgians Eugénie Coche and Arthur Buerms had come to New Zealand to launch The Nomadic Art Gallery. Purchasing a small truck to both sleep and exhibit in, they travelled the country in 2020 meeting artists and exhibiting their work in the back of their van. 106 artists added their visual mark to the truck’s exterior, itself now exhibited at Connells Bay Sculpture Park on Waiheke Island.

As a trustee of The Arts Foundation – a New Zealand foundation facilitating opportunities for artists through private philanthropy – Kent Gardner guided the couple in a crowdfunding campaign and, impressed with their knowledge and passion, tasked them – in addition to their nomadic gallery enterprise – with building a collection for his family’s holiday house. Gardner wanted the collection to be based on The Nomadic Art Gallery’s exhibition themes, which included birth, death, nostalgia, belief and alienation.So, Coche and Buerms made one final trip around New Zealand, packing the truck with Kent’s soon-to-be collection, some of which had been previously exhibited in the truck, others specially purchased.

“I had been a little reluctant to start collecting New Zealand art, put off a bit by the tick box approach to collecting,” says Gardner, who had been living for some time in London as an investment bank chief executive. “I wanted a more grassroots and considered approach. I wanted to look at New Zealand art through fresh eyes, not my eyes, without any preconceptions about what is important. And when I got talking to Arthur about what they were going to do I saw an opportunity.”

“I liked that they were completely dedicated to it and wanted to do it properly. There’s a level of detail, and so much time spent going to galleries and meeting artists. Maybe Arthur and Eugénie will go away and be the people in Europe who know the most about contemporary art in New Zealand at this time.”

All this leads to a collection full of surprises. Photographic series Korokoro by Shannon Te Ao, a dealer exhibition highlight in 2020, is here long before it gets to a NZ public gallery. Then there are lesser-known artists – a two-metre long Chinese inspired scroll painting in ink of a Manukau Harbour panorama (presented rolled in a small tube) by Minrui Yang is stunning, while Ada Leung creates a glowing wasp’s nest, or shell out of pencil shavings.

Different spaces in the house also played a big role in thoughtful selection. In the guest rooms, visitors can appreciate works with suggestive connotations by Heather Straka, John Ward Knox, Kushana Bush and Aiko Robinson. They stand in contrast to the children’s rooms which focus on quirky and playful paintings by Milarky, Ayesha Green, Valerie Bos and Philip Trusttum. Works elsewhere by artists Helen Calder, Emily Hartley Skudder and Oliver Cain speak sculpturally to nearby bathrooms.

A combination of themes and location can be touching: several works in the master bedroom are on the theme of love and growth, including a small work by Ophelia King made from her and her partners’ eyelashes, hidden away in the dressing room.

Upstairs the house opens out spectacularly to sea and sky, and the art responds. The Pacific is present in works by artists Jasmine Togo-Brisby, Fatu Feu’u, Andy Leleisi’uao and Edith Amituanai. Above the stairwell, an impressive layered James Robinson blue mandala of fabric looks like it might have once hung under the jetty you can see through the manuka trees below, while Inga Fillary’s heavy abstract above the fireplace, made of clay, mud, soil, gravel, hair and rust speaks to the tidal coastline out the windows.

“The most important part in selection was that the work fitted within the themes,” says Buerms, “To have a conceptual boundary or shape for the collection.” In this way the artworks work as a whole, telling a rather special story.

This article was originally published in Art Collector issue 96, April to June 2021.