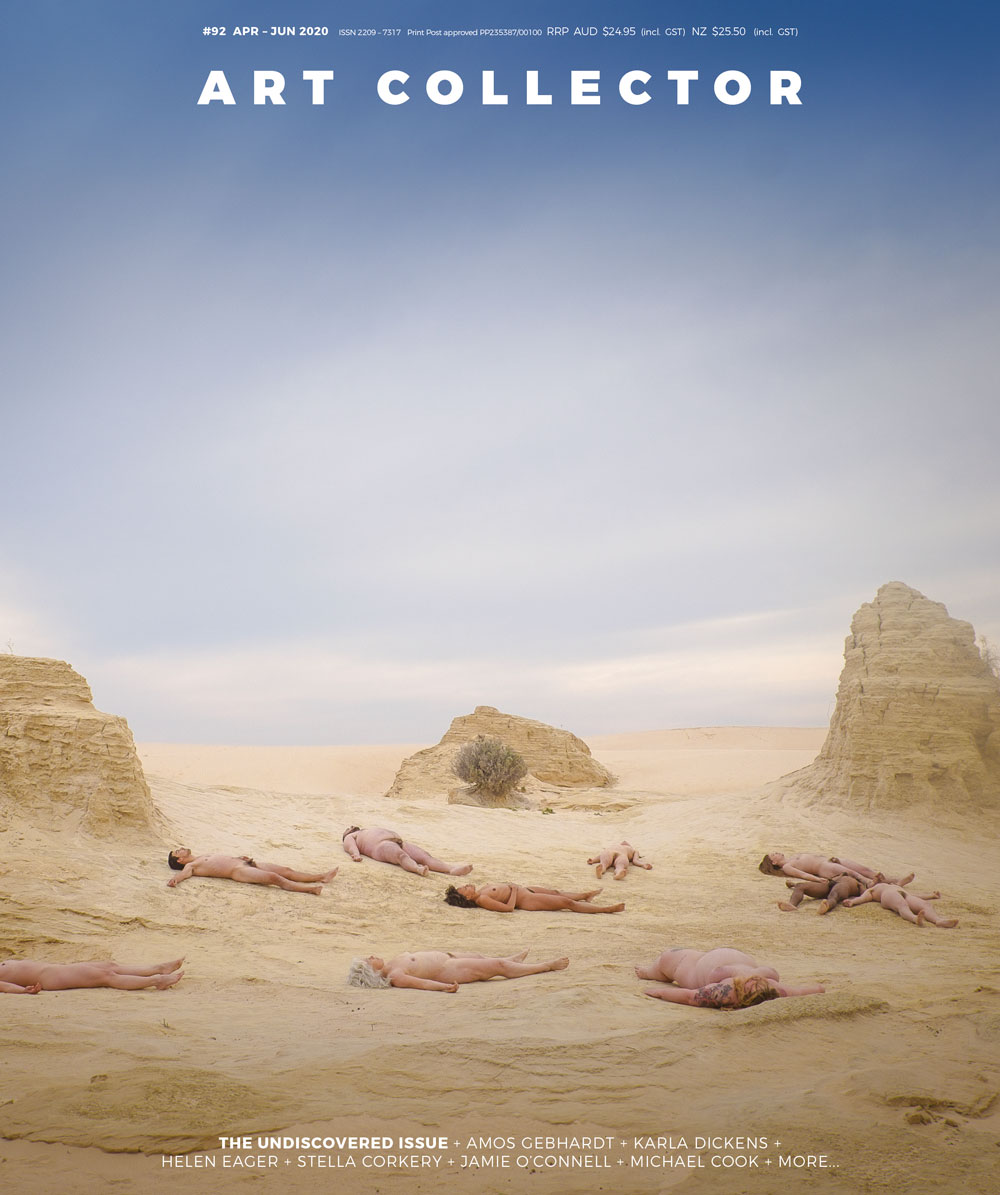 With all due respect
How should governments support the visual arts amidst the COVID-19 crisis.

Agenda
The arts community responds to the bushfires.

Lifecycle of a collector
What happens to a collection when a couple splits part four: letting it mature.

Cultural capital
What are the obligations of a committed dealer to their artists?

On the couch
We sit down with AGNSW director Michael Brand to talk 50 years of collecting contemporary art.

If I could have
Art historian Joanna Mendelssohn presents the artwork on her wish list.

What next?
Four new artists on our radar.

Undiscovered
The currently unrepresented artists you should know.

Collector’s Dossier
Micheal Do on Helen Eager’s four-decade love affair with the pleasure principles of abstraction.

23-hour party person
Jamie O’Connell asks Rex Butler: If you have to ride as fast as you can only to stay still, what would happen if you stopped riding?

Keeping up with the joneses
Louise Martin-Chew on how Michael Cook’s new photographic series canvasses our expectations of ordinary.

Real made strange
Joseph Brennan talks to Oliver Watts about his latest suite of seductive paintings.

Dealer: the Suite life
After 13 years in Wellington, Suite is opening a second space in Auckland.

Collector: heart, mind and soul
Rose and John Dunn’s response to art ignites all the senses.

Previews
The notable exhibitions across the region this quarter.

Portrait of a gallerist
How two friends came to establish one of Australia’s top commercial spaces.

One sentence reviews
Recent exhibitions summed up by our writers in a single sentence.

Off the wall
Sharne Wolff on what was special at Chalk Horse Sydney’s recent dual exhibition.

Mark Amery has worked as an art critic, writer, editor and broadcaster for many years across the arts and media. He is also an art consultant, coeditor of The Spinoff art section and co-director of public art programme Letting Space.

Dr Joseph Brennan is an art critic, media scholar and magazine editor. He publishes widely, including with leading academic journals and university press collections. His writings on art have appeared in Art Almanac, Artichoke and Australian Art Review.

Dr Rex Butler’s research interests include Australian art and art criticism, post-war American art and critical theory. He is an art historian and professor at Monash University in Melbourne.

Sophia Cai is a curator and arts writer based in Melbourne, Australia. She is interested in Asian art history, the intersection between contemporary art and craft, as well as feminist methodologies and community-based practices.

Claire G. Coleman is a Noongar woman who writes fiction, essays and poetry while (mostly) travelling around the continent now called Australia in a ragged caravan towed by an ancient troopy.

Ashley Crawford is a cultural critic and arts journalist based in Melbourne. He is the author of a number of books on Australian art, including Transformations: The Work of Sonia Payes and Spray, The Work of Howard Arkley.

Anabel Dean is a former Sydney Morning Herald and Bulletin journalist. She works as a freelance writer and host for The Art Gallery of New South Wales and a guide at National Art School. Her work appears in publications including The Sydney Morning Herald, NZ Life and Leisure, Gourmet Traveller, The West Australian, Art Edit and Vogue, among others.

Briony Downes studied Art History at Oxford University and Australian Aboriginal Art at Curtin University. She lives and works in Hobart, Tasmania and has worked in the arts for 20 years as a writer and art theory tutor.

Micheal Do is a curator and writer. His exhibition Soft Core, developed for Casula Powerhouse Arts Centre, is currently touring 12 regional and rural galleries throughout New South Wales, Victoria and Queensland.

Dr Ben Eltham is a lecturer in Media and Communications at Monash University’s School of Media, Film and Journalism.

Dr Andrew Frost is an art critic, broadcaster and lecturer. Since 2004 he has been the editor of theartlife.com.au and since 2013 an art critic for Guardian Australia.

Sue Gardiner has been an art writer since 1999. She is a Trustee of the Chartwell Trust and was co-director of the Save Our Gallery campaign, which aimed to restore and protect the public funding of the Auckland Art Gallery Toi o Tāmaki in 2017/18. Sue was recently made a Member of the New Zealand Order of Merit for her services to the arts.

Kirstin Gollings is a Melbourne-based photographer.

Alexander (Sasha) Grishin  is an emeritus professor at the Australian National University and works internationally as an art historian, art critic and curator.

Aarna Fitzgerald Hanley holds a Bachelor of Arts in Art History and Theory, a Master of Publishing (with merit) and a Juris Doctor from The University of Sydney. Aarna currently is assistant curator, visual arts at Carriageworks and is on the board of Runway.

Courtney Kidd is a Sydney-based art writer and art consultant with Artbank.

Joanna Kitto started working as a curator at Samstag Museum of Art in 2017. She has worked with contemporary art organisations such as the City of Adelaide (Art Pod), Flinders University City Gallery and the Adelaide Festival (Visual Arts), and produced exhibitions independently at spaces including the Australian Experimental Art Foundation and Praxis Artspace.

Kallan Macleod is a photographer based in Auckland.

Jacquie Manning is a sydney-based photographer.

Louise Martin-Chew has been writing about the visual arts for 25 years. She also works as a public art consultant and is currently finalising a doctorate at the University of Queensland.

Emil McAvoy’s practice examines histories and concepts of the cultural roles of artists. Based in Auckland, he works as an artist, lecturer, art writer and gallery and museum professional.

Carrie Miller is a freelance writer and curator who has contributed to Art Collector for 15 years.She holds a BA (Fine Arts and Philosophy) and a First Class Honours degree in Philosophy from The University of Sydney. Her curatorial projects include Transmission at Campbelltown Arts Centre and Exhibit A at The Lock Up, Newcastle.

Joanna Mendelssohn was one of the first graduates in Fine Arts at the University of Sydney, studying under Bernard Smith and Donald Brook. She is an honorary principal fellow at the Centre of Visual Arts, University of Melbourne.

Damien O’Mara is a Brisbane-based photographer.

Jane O’Sullivan has written for publications including the Australian Financial Review, Artnet, Art Guide and Ocula. She is a former editor of Art Collector.

Daniel Purvis teaches visual communication at the University of South Australia and works as a freelance photographer.

Diego Ramirez’s practice employs a variety of mediums to unpack representations of otherness from the perspective of a Mexican subject. He works as an artist, writer and arts worker.

Leigh Robb is the curator of contemporary art at the Art Gallery of South Australia. Previously she was the senior curator at the Perth Institute of Contemporary Arts.

Anne Ryan is the curator, Australian art at the Art Gallery of New South Wales.

Linda Tyler completed her PhD on 19th-century botanist and museum worker John Buchanan, and her MA on émigré architect Ernst Plischke. She is currently the convenor of Museums and Cultural Heritage at the University of Auckland. As a curator, her projects for 2020 include Tākiri: an unfurling, an exhibition of contemporary Māori art at the New Zealand Maritime Museum, and a small exhibition of early works by Anne Hamblett for Michael Lett Gallery in Auckland.

Sharne Wolff is a freelance arts journalist based near Byron Bay. Her current PhD research project focuses on the relationship between Australian contemporary art and walking.

Chloé Wolifson has a decade’s experience in arts administration and management. She is regularly commissioned as a writer, including exhibition essays and reviews, and has curated and co-curated exhibitions in public, artist-run and commercial spaces.

Coen Young is a Sydney-based artist.