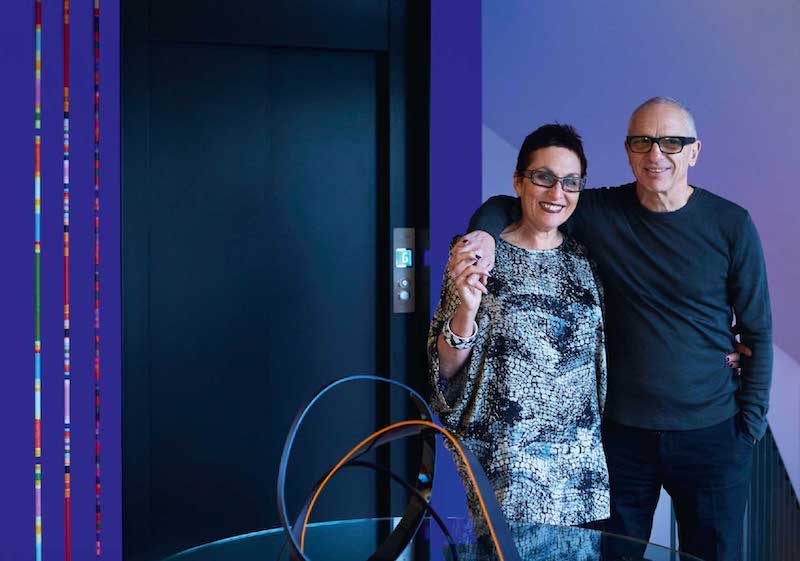 What began as a pottery collection has evolved into a house museum that will host two curated exhibitions each year.

“Many of our younger visitors don’t immediately get the connection with the Hitchcock movie The Thirty Nine Steps,” Charles Justin tells me as he welcomes me to his art museum in Prahran, a short train ride from Melbourne’s CBD. “But when my daughter Elisa, also an architect, designed this house and museum for us, we realized there were 39 steps leading up to the top floor.”

Charles and his wife Leah, who is an equal partner in the running of the art museum, decided to make a feature of the stairs. “We wanted it to be an interactive light experience,” he says. “Each step has 50 programs installed, and there are sensors at the top and bottom of each flight, so that when a visitor trips the sensor they change the sequence and will experience a unique visual experience.”

Should you prefer to travel upwards by lift, you will experience a Paul Snell Bullseye artwork gracing its walls. The whole building – inside and out – is a place of contemplation and curiosity. The museum itself contains curated exhibitions, two per year, running for three months each. This leaves six months free for travel, collecting, and family life. One of the two exhibitions is drawn from the family collection, and the other is a curated exhibition. During the run of the exhibitions there are two to three guided tours per week.

“Currently we are in the throes of locking in our next exhibition,” Charles tells me, “which is curated by Justin Andrews, this artist here. He’s one of my favourite artists and we have a lot of his work in the collection. When he heard we were building this art museum he put up his hand and had this very ambitious project about geometric abstraction that he wanted to put on. Initially he wanted to use four sites around the world; one in Melbourne, one in New Zealand, Germany, and Holland. He’s only got the first two up so far, but as well as himself there’s Stephen Bram and John Nixon, and then three German artists – Lars Breuer, Sebastian Freytag, Guido Münch who also operate as the collective Konsortium-d.

Two will come across and stay with us for ten days. The exhibition will explore the roots of geometric abstraction and its relevance to our world today.”

There is an appealingly evangelical enthusiasm to all of Charles’ comments about his museum and its contents. Visitors who come to take a tour spend one hour being shown around the museum itself, and the second hour in the family apartment on the top floor, with refreshments served and an open invitation to explore bedrooms, bathrooms, lounge, “We used to collect pottery in the early days. When I was an architecture student, some close friends asked me to design their house. And in lieu of payment they offered me a painting by an emerging artist. It came from Gallery A, which doesn’t exist anymore. And as Leah says, that painter is still emerging forty-five years later – but we love it. It’s an abstract work, and we couldn’t afford to buy more paintings at that time, so we bought prints and pottery. We’ve probably been collecting seriously for the past 25 years.”

Charles studied architecture at Melbourne University. He’s retired now, no longer an architect, but a museum operator. In their bedroom he shows me the work of Melbourne painter Max White, three canvases recently installed.

“I’ve had my eye on Max’s work for a while. He shows at Langford 120. I buy quite a lot of work from there because both Wilma and Irene, the artist-directors, are abstractionists themselves and they’ve got a really good eye. They like the sort of things that I like. And it’s a great gallery space too,” says Charles.

There are six apartments underneath the art gallery and their living accommodation on top. “We wanted it to have very high environmental ratings and we’ve achieved 8 + star. We also wanted to commission art that is integral to the building, so in addition to the lift and stairs, the external striped cladding to the building is by Tunni Kraus who completed an art masters thesis on the traditional striped campesenos in the Melbourne suburbs of the 1950s and 60s,” says Justin.

The afternoon ended delightfully with the discovery that we have a shared passion for the years 1905 and 1906 when Picasso and Einstein both upturned their respective fields with the discovery of relativity and the invention of cubism. Such big visions fit well with their inaugural exhibition The Divine, and I take a final look at it before leaving.

“It’s a big topic,” Charles reflects, “and slightly ironic in that we describe to visitors that Leah and I are both atheists. But sometimes the non-believers interrogate these things more rigorously. And I guess one of the propositions we put to people is that while we may not believe in God, we believe in the idea of God as a vehicle for trying to understand the universe. And so we’re saying, if you look at a work of art in the same way that people used to, and still do, interrogate scripture, and try to understand what it all means, then art can fulfil the same purpose. That’s maybe why more people these days visit art galleries on a Sunday than go to church. And the eighteen works we have in this show, curated by Rachel Kohn are, I guess, centred around secular notions of the divine.”