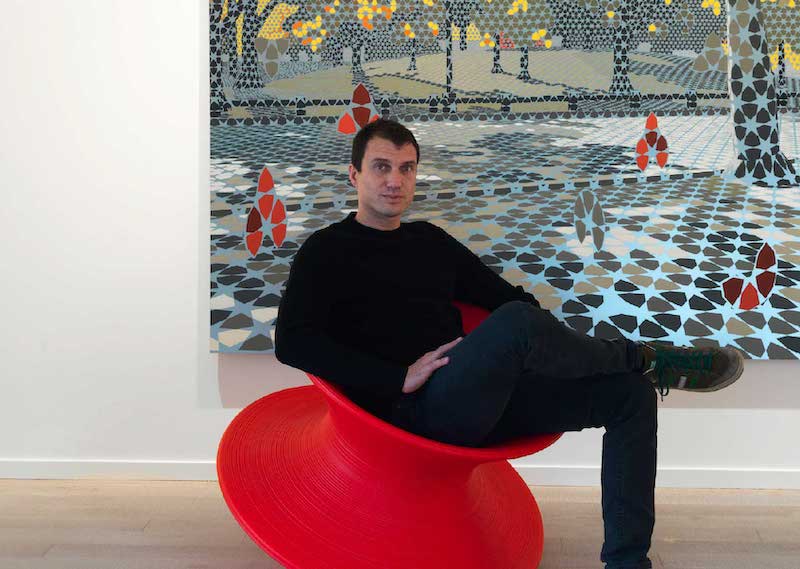 Buying and curating most of David Walsh’s collection at Hobart’s Mona, Olivier Varenne’s job is an enviable one for any art lover.

Olivier Varenne has one of the best jobs in the world. For more than a decade he has been sourcing, buying and curating most of uber-collector David Walsh’s world-renowned collection at the Museum of Old and New Art in Tasmania. He also has his own, very personal, collection of art at his home in Geneva, Switzerland.

“I’ve been working for David Walsh now for exactly 10 years. I am the director of exhibitions and collections at Mona,” he tells me in his precisely modulated French accent, as we pour over a pile of catalogues, most the size of big city phone books, all of which he has been closely involved with. “I work internationally and I’m based primarily in London, Switzerland and Hobart. Since the beginning, David has given me a large budget to go around the world and buy works at my discretion. There is a huge amount of trust between us. We have big discussions about what we should buy for the collection, although in some situations, as at art fairs, for example, if something needs to be bought immediately I can do that.”

As if to emphasise the international nature of Varenne’s activities, this interview started in the hotel bar of the Eurostar departure lounge at London’s St Pancras railway station, continued in the open office spaces of Walsh’s Mona, with its sweeping views up the Derwent (while Gilbert and George signed copies of their massive exhibition catalogue on a table at the far end of the room), and concluded some weeks later at an outdoor cafe in Melbourne’s Chapel Street. It was at this final setting that I asked him about his personal collection of artworks and his plans (now realised) for an Internet collecting site called Collectionair.

“I have a large collection of my own, mostly at my house in London,” he tells me. I ask him how long he has been collecting art, how did it all begin? We have to raise our voices against the noise of the early evening shoppers on busy Chapel Street.

“I started collecting when I was eight years old. My father, who also collected art, was a regular at FIAC in Paris – you know, the art fair – and he would take me with him. I started buying a series of collaged newspapers called Plage, made by a collective of artists. They produced two or three editions per year on subjects like climate change, or the banking system, or anti-war images – all on different important subjects. These works were a patchwork of collage, often using organic materials, some quite smelly, but very tactile. I started buying them for anything between 15 French francs to 100 French francs – maybe averaging $50 each. And I bought hundreds of them, starting in 1985. Now, the Centre Pompidou has bought the whole series for two million euros.”

And what, I wondered, was he collecting now? “As I grew older I started collecting young artists. Many of them were from the new scene in England, the yBas [young British artists] as they were called. I also bought works by Conrad Shawcross, Toby Ziegler, Benedetto Pietromarchi, and this was around the same time as I bought Mad from Gilbert and George, which shows the black and white head of a tramp on a large grid.”

At this point, my mind flashes back a few weeks to Hobart’s Odeon Theatre where Varenne is interviewing the two artists (who see themselves as one) in front of a packed house. He quizzed them about the street in East London where they have lived for decades: “The whole world is here,” they said. “Tramps and homeless people, damaged kids. It’s very Dickensian, framed by a Hawksmoor church, a synagogue and a French Hugenot church. There’s a Jewish wine shop and a Polish deli.”

When Varenne is sourcing work for the Mona collection, or planning huge shows by Gilbert and George, or Wim Delvoye, or Matthew Barney, or Marina Abramovic´, he has to get to know a variety of very different artists in this intimate way, and over many visits to their houses and studios.

“In a sense Gilbert and George were the easiest,” he says, although the show, which finished in March, was huge. “Quite simply, they wanted complete control over everything. They are very much anti-curator.” This control included the very un-Mona-like white walls and absolute control over the catalogue, each one of which they signed.

I ask him if this was an aesthetic or a financial consideration when he decided to go down this route? “Well, they still cost money, of course, but for the price of one really major contemporary painting you can form a whole focussed collection of very strong works by a number of leading artists. My works were included in the Dali retrospective at the Pompidou, so I like to choose really good examples by each artist. But I think also paper, aesthetically, is very moving. It is a very sophisticated medium of support, and also it allows artists to do anything they want. Very strong ideas can be put down quite quickly – it’s not like plaster, or sculpture, or even paint. It’s not rigid.”

As we arrange a photo shoot at his Geneva house, he shows me some images on his iPhone and talks me through what is currently on display. “I have incorporated many site specific works into the architecture,” he explains. “Some are by the artists linked to the group Support Structure. They came after the time of the abstract expressionists. They are a Swiss movement lead by Olivier Mosset, and also includes John Armleder, and later Felice Varini, who was a bit younger. He found a way to create minimal shapes in a space, using tape and often incorporating circles. In my home, where Varini has built an installation, the work seems to move within the architecture. What he has created is not trompe l’oeil [an optical illusion], but it is an abstract explosion of the space, with many viewpoints.”

Finally, we discuss his new project. He is very excited about it and hopes it will herald a new form of collecting that combines serious curation with a beautifully designed website. It will allow all sorts of creative things to happen, both for artists and curators.

“The project is called Collectionair and it will be very good for artists, curators and art collectors ”, he tells me. “I have partnered with a brilliant tech expert called Valerie Konde who used to be very high up in Google and has been involved in many start-ups. The premise is this. As I travel around the world I see so many new and emerging artists who are creating fantastic work but do not have gallery representation. Then there are other fabulous artists who maybe only show at one gallery, far away from the so-called big centres. But it is also the same in New York, Berlin, or Singapore – their work is not being seen by the rest of the world.

I want to create a website that allows these people to have a voice. How I am going to do that is set up a network of curators, of people that I find interesting, either recommended by me or by a committee of curators with open minds. This network of curators will each do a one-month pop-up exhibition on the website. It could be a solo show, or a group show of artists from the emerging scene, or another tendency that they find interesting from their specialist research.

These works will be for sale, and at the beginning they will all be for under US$5,000. I want to attract not just established collectors but people who might be intimidated by going into galleries. They may also find that art fairs are just too much, too confusing, as there is so much to see and it is never properly curated. Also, the pricing at art fairs is confusing and often inconsistent. Some of the work we will sell on Collectionair might just be priced at $1,000 or $2,000. I want to give anyone the chance to collect, just as I did when I was eight years old.

“The important thing I want to stress is that this is an idea that can give all curators a voice and allow them to be represented, just as artists are represented, on the web. Each curator can create their own brand, if you like, and it will be like a self-rating system depending on the number of sales they get, or on the critical reviews that attach to the web exhibitions. It will also interact with the real world. For example, if a bricks and mortar museum in New York wanted to put on an exhibition of Australian art, then they can find both the curators and the artists on Collectionair. I’ve also been in discussion with David Walsh about this. I am hoping he will join the board, because we all need more brains like his.

“And the final thing is, we will also be represented physically at some art fairs and at museum and gallery spaces, so there will be a two-way flow between the global world wide web and real, local spaces, whether they be in London, Dubai, Singapore, or Hobart.”