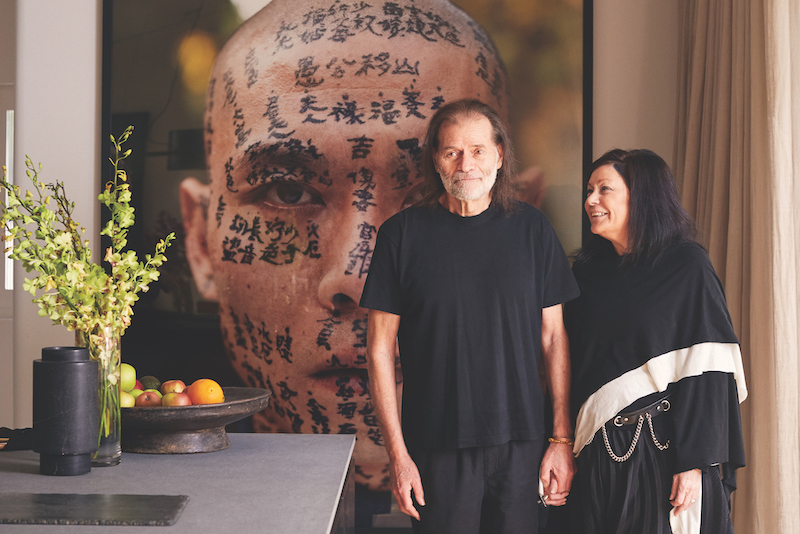 Known for boosting the careers of countless artists, Gene Sherman remains one of Australia’s most formidable cultural advocates. Unsurprisingly, she and her husband Brian are also voracious art collectors.

Inside the immaculate kitchen of a California-style bungalow in Centennial Park, Sydney, Gene Sherman and I lean over the stove to study a cluster of glistening knives on the wall. More than 300 of them actually, hand-forged by Filipino artists Isabel and Alfredo Aquilizan into the hulky shape of an archangel’s wing. Sherman, who has commissioned works by the art couple previously, tells me she’s continually intrigued by the Aquilizans’ diverse practice, recalling that she discovered an expanded version of this Left Wing series installed as a suspended kinetic structure at Art Basel Hong Kong. “I’m sensitive to originality,” Sherman reveals. “So, when it comes to collecting art, I’m constantly looking for a type of new that speaks to me.” When I jokingly ask if it’s ominous to cook underneath a school of blades, Sherman laughs. “I’m not worried about that, I don’t cook.”

Not that Sherman has time to cook, it seems. This art world doyenne remains one of Australia’s most formidable cultural advocates. Over the past three decades, she’s helped transform the way people experience and collect art – through her oscillating roles of curator, art advisor, academic, producer and benefactor. Known for boosting the careers of countless artists, she established Sherman Galleries with curatorial director, the late William Wright, which ran from 1986 to 2007, followed by the Sherman Contemporary Art Foundation, from 2008 to 2017. Both enterprises were supported by her husband Brian, a humanitarian and former entrepreneur whose funds management business Equitilink garnered them mammoth wealth. “During those years, I initially searched for artists on the rise,” she states, “and we offered them exhibitions, publications and budget support, so they could create breakthrough works.” Although breakthroughs didn’t eventuate for every commissioned artist, “they happened enough to encourage me to continue doing what I did”.

Across the decades, the Shermans have collected or commissioned work through several commercial galleries, including Yavuz Gallery (Singapore) and 10 Chancery Lane Gallery (Hong Kong).

While Sherman points to her father – a collector of art and Persian carpets – for igniting her own passion to collect, she also credits the success of Sherman Galleries as a consequence of her ability to anticipate and embrace change and identify significant artists in the early stages of their development. Eyeballing “tens of thousands of artworks” during her professional, academic and art world journey has led her to concentrate on artists based in the Asia Pacific, Australia, and the Middle East – regions with mingling languages and cultures that fascinate her.

As an avid researcher, she is drawn to the themes of diaspora, uneven power structures and social justice, often explored by artists like Barthélémy Toguo and Mikhael Subotzky.

She also speaks French and Afrikaans and treats multilingualism as a superpower that lets her “see the world through different linguistic, cultural and spiritual prisms”. It’s these diverse viewpoints “that influence how I look at art”, she says with a noticeably South African accent, despite emigrating to Australia with Brian in 1976.

The couple prefer to collect from living artists because, as Sherman divulges, “there’s pleasure in being able to engage with the artists and form bonds with some of them”. She fondly recalls the time Cai Guo-Qiang remedied Brian’s kidney pain with Chinese herbal-mushroom potions when they visited his studio in New York. In terms of displaying her collection, Sherman reasons: “I want to imbue my home with beautiful objects, but walls are not a fundamental driver. I’ve placed art on the floor, lawns, tables, on shelves, in my wardrobe … I’d still be collecting art if I lived in a tent.” Far from tent-like, the historic home she shares with Brian — which was originally built for a former Lord Mayor of Sydney in 1918 — is peppered with works that fulfil her criteria: “The art I like is emotionally connective, intellectually challenging and visually compelling. I aspire to live a curated and aesthetically-rich life.”

Accordingly, their abode boasts the hallmark of impeccable curation. Shimmering next to a sun-cast window is Pinaree Sanpitak’s sculptural mirror-and-aluminium pond. In the hallway, I walk directly onto a glass-coffined floor propped up by Do Ho Suh’s army of plastic figurines. Elsewhere, a moody Philip Wolfhagen hangs near Bùi Công Khánh’s concertina screen, carved from jackfruit wood. Hypnotising visitors to the dining area are Zhang Huan’s steely-eyed, Chinese-ink-scribbled face portraits Family Tree, which the Shermans acquired after discovering them at the Museum of Contemporary Art in 2004. “We bought all nine huge photographs at Brian’s insistence. What’s special is that we now get to pass Zhang’s series down to our own family tree,” beams Sherman, who, together with Brian, has two children and six grandkids.

At 72, the steadfast arts patron continues to energise the Australian cultural landscape while building her family legacy. Recently, the Shermans donated $1.5 million to build a project space for experimental artists as part of the ambitious Sydney Modern development, launching 2021. This October sees her deliver an architecture program at Sherman Centre for Culture and Ideas, a Hub series founded in 2017 to amplify fashion and architecture conversations. Ever the vanguard, Sherman sees no division between art forms, often merging disciplines in her professional and personal endeavours. In fact, today she’s ornately dressed in a sculptural ensemble, with various designs by Issey Miyake, Alistair Trung and Yohji Yamamoto, and her arm adorned by a spider-like Tone Vigeland bracelet.

“I view all my interests as one large jigsaw puzzle, made up of connecting pieces that together create a whole picture,” Sherman declares. “This is why everything in my life — art, travel, language, architecture, fashion and family — interconnects, weaving a tapestry underpinned by ideas, emotion and an ever-seeking quest for harmony.”