Throughout his career, John Pule has developed his own language of motifs and figurative elements anchored in the history and mythology of his birthplace Niue, an island country in the South Pacific.

At the beginning of the 1990s, John Pule discovered a style that enabled him to create paintings and works on paper that were powerfully original. Their imagery was energised by the stimulus of hiapo, the dynamic painted barkcloths of 19th century Niue, notable for their quirky pictorial imagery – ships, compasses, the occasional beetle – as well as strong grids and botanical motifs. Pacific artists in New Zealand were gaining visibility, and there was widespread interest in customary motifs, as there was too, in the new Pacific jewellery and fashion. Yet Pule was neither trying to revive a traditional form, nor to ground a contemporary identity in a Niuean traditional art. Curiously, his early paintings look like hiapo but do not really resemble them at all.

Pule saw the fabrics as incarnations of an architecture: an organisation of space, a working of nature that made it habitable, and gave it an aesthetic. While Pule employed hiapo’s dark brown palette and grided style, his motifs bore no resemblance to tapa patterns. Geometric devices worked in tension with more organic elements, such as thick bands full of fine line, suggesting the flow of a river or blood through an artery. Large circular forms suggested a ritual architecture, a place of sacrifice and blessing.

Pule’s signature in the 1990s was the restless combination of dynamic form and figure. Some of his figures are recognisable animals such as pigs and fish, but only in outline – their bodies are vessels that contain motifs, scenes and other creatures. Many too have a monstrous character, they are strange

bird- or lizard-like predators with gaping jaws. What these outlandish and energetic creatures suggest is a landscape of myth, a cosmogenic domain of transformation and transgression, of theft and loss, but also consumption and growth. But if Pule’s viewers ever assumed that these paintings illustrated Polynesian myth, they were mistaken. This was a personal vision, not a Niuean counterpart to the efforts of some Maori who use modern painting to represent myths and ancestral histories.

Pule is estranged from the Christianity that his parents’ generation were so attached to. He would agree with the critique of missionaries’ cultural imperialism, but is saddened more than angered. His sense is that a sick Christ was rejuvenated in the Pacific, that the church has sucked vitality from the lives of Pacific Islanders. Hence while he depicts people lamenting the death of Christ, his own lamentation is over the loss of their own gods, and of so much else.

Powerful as these themes are, they do not amount to the whole story. And this is in part why and how Pule is propelled beyond the early paintings such as Lamentation, which image a moment of loss and nothing else. The issue remains potent in the hiapo works but is in tension with other energies. Consider Style with Seven Moons, 1993, which presents the issue of Christianity, of before and after, in an oblique but explicit way. The top right frame in the grid depicts a couple having sex, as does that on the bottom left, but there is a juxtaposition. The former employ an Indigenous position, as opposed to the missionary position that is enjoyed under the sign of the cross. Yet both exhibit danger and ecstasy: these vital forces transcend the historic divide.

By the end of the 1990s, Pule was trying out quite different compositions and in 2001, began to produce work that was startlingly different. The grid and the fullness was gone. The viewer encounters not a map or a body but an atmospheric space, a surreal cloudscape. The clouds are at once inhabited and interlinked, by paths, long and precarious ladders, and by plant growths. The vines and plants are associated with life, origins, and nurture. Yet many of the characters betwixt and between the plants and clouds are dismembered. Calamities appear to be unfolding. Aeroplanes, great bodies, are sliced apart, trophy heads are being carried away by tiny figures, actors who make their way precariously between islets in a void.

Pule’s work had always proceeded from a consciousness of a profoundly disturbed history. While that history and experience incorporated moments of joy, its dark side always stood out, and became more potent and threatening, in increasingly impressive and ambitious works. Personal mythology remained present, the works full of writhing, injured, predatory creatures, suggesting violence on a cosmological scale, yet also what was going on in the world of global politics in the early 2000s. The violence of religion and sacrifice had assumed new significance, as did the broken bodies of a passenger aircraft. The twin towers and an approaching plane are visible, a tiny detail, in Another Green World, 2006, (see timeline on page 165). The scenes and rites of violence in Pule’s work from the period have a fantastic look to them, but it is something real and close to us that is being acknowledged.

In the last five years, Pule has returned to Oceania’s history, to the shores of a profound and inky ocean. The colour is no longer burnt umber, red, or green but black and blue. The works moreover take a historical turn and engage the passages of exploration and cross-cultural contact that marked the beginnings of colonial history in the Pacific and are again much debated. Pule depicts ships, landings, violence, and interaction. Some of the finer drawn imagery is reminiscent of John Webber’s iconic Death of Captain Cook, or William Hodges’ paintings of the encounters of Cook’s second voyage – scenes of excitement, confusion, hubbub and violent resistance.

If these formidable black paintings marked a return to particularly Pacific sites, scenes and characters, the move does not quite bring the artist full circle. Arrival, The Splendid Land, and other works carry with them everything that is disturbing, indeed threatening, in paintings such as Another Green World. Whether he is making sense of missionaries, turning toward hiapo, or engaging with the Cook voyages, John Pule has always responded to the troubled past. Yet ecstasy and terror have always been intertwined. His newest paintings enlarge and enliven the botanical motifs that were always fertile in his works: here vitality seems to explode, joyfully.

John Pule is nothing if not consistent, having produced a significant body of work right throughout his artistic career. His works have been sold worldwide to institutional, private and corporate collections including those in Switzerland, Germany, America and the UK. Several public collections provide viewings on request, including Auckland Art Gallery, Christchurch Art Gallery, Canberra’s National Gallery of Australia and Queensland Art Gallery. While many of his pieces have sold into private collections, Pule’s work will occasionally appear at auction or for sale through Gow Langsford Gallery who represent the artist in New Zealand. When these exhibitions do occur, they tend to be a sell-out. Pule is represented in Australia by Sydney’s Martin Browne Contemporary and Melbourne’s Karen Woodbury Gallery.

In 2013, Pule’s large-scale diptych, The Place Where I’ve Not Been, 1997, sold for $51,750 at auction. More recently, his smaller canvas work Arcadia, 2011, reached $22,275 against a pre-sale estimate of $13,000 to $18,000. At auction the artist’s prints can sell for anywhere between $1,000 and $4,000. Art + Object director Ben Plumbly believes that the market sees Pule as “one of the most important artists of his generation, respected by curators and collectors for the quality, uniqueness and breadth of his practice”. For this reason he can see a steady and strong demand for the artist’s work. – Naomi Gall

Writer and curator Gregory O’Brien describes John Pule as the “leading contemporary artist of Polynesian descent” who is a “crucial and compelling figure in the contemporary art world both locally and internationally”. Having contributed an essay to the 2010 publication Hauaga: The Art of John Pule, O’Brien’s familiarity with and admiration of the self-taught artist’s work is evident. Describing Pule as a “radical agent”, O’Brien finds his work both provocative and perplexing, pushing the boundaries of contemporary art with challenging ideas of “oceanic environments, the element, mythologies and [post] colonial histories”. The cultural relevance of Pule’s work is unmistakable, with his diverse practice encompassing areas from Niuean tradition to Christianity. As O’Brien elaborates: “his work adds power and potency to Polynesian art of earlier eras … and asserts traditional ways of art-making that are alive and in a state of reinvention.” There is a sense that Pule’s work is deeply personal – that his treatment of mythology and storytelling is “as though he wore them on his skin”. While profoundly traditional, his work also takes inspiration from artists and movements such as Picasso and surrealism, creating a hybrid that O’Brien describes as “a map of his subconscious”. Perhaps best known for his use of hiapo, Pule uses this traditional medium to explore his own personal experiences as a Niuean living in New Zealand. For O’Brien, it’s “the restlessness and constant realignment in his art that keeps me interested”. – Naomi Gall

There is an air of anticipation surrounding John Pule’s December exhibition with Gow Langsford Gallery, with the artist launching of a new series of work. Incorporating elements of collage with his unique painting and drawing techniques, these are still a work in progress but gallery director John Gow estimates they will sell for anywhere between $15,000 and $50,000. Gow credits the steadily in- creasing popularity and value of Pule’s work in the market to “a well-constructed career with his museum shows, significant book publications and consistent high quality works all combining to make this happen.” This can be seen in the steady demand for Pule’s work by both private and public collections and through impressive secondary market prices. Arguably this is a result of the recent sale of Pule’s work to the National Gallery of Australia in Canberra as well as a touring museum exhibition in Germany. Perhaps most significant is the New Zealand Order of Merit which Pule received in 2012 for his services to the arts. The artist’s work has been included in several publications, with Gow describing Nicholas Thomas, director of the Museum of Archaeology and Anthropology in Cambridge as a “champion of his work”, having written about Pule numerous times. Along with the Auckland Art Gallery, the Queensland Art Gallery maintains one of the largest institutional holdings of the artist’s work, but his popularity is not just confined to New Zealand and Australia, as Gow comments: “John has a very strong following outside of New Zealand which stands his market and reputation in a solid position for the future.” – Naomi Gall 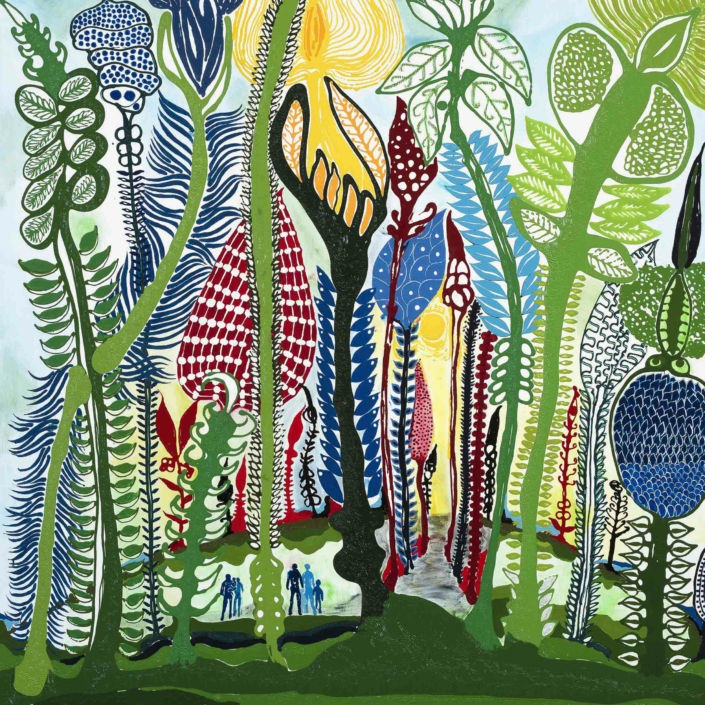