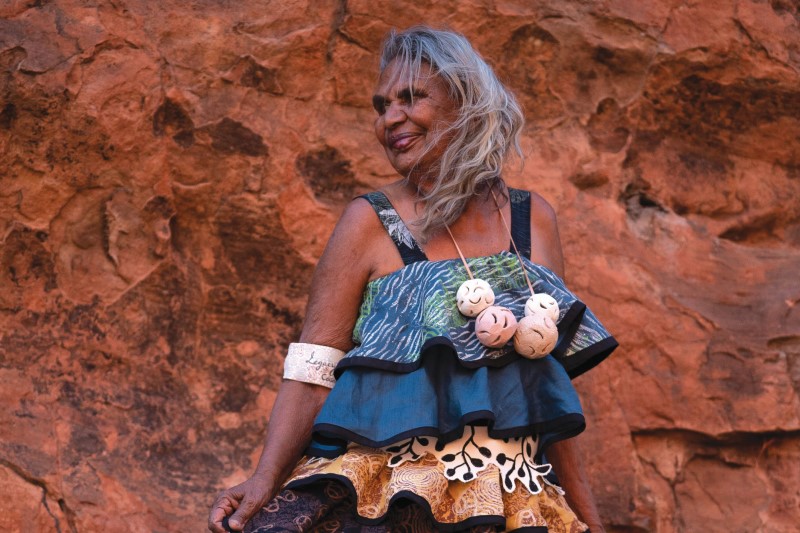 Among the winners was Peggy Griffiths, who was awarded the Cultural Adornment and Wearable Art Award. Griffiths is a Kununurra woman whose Legacy Dress secured her success in the wearable art category for both its creative flair and deep cultural meaning.

“Cultural adornment and wearable art showcases thousands of years of Aboriginal culture, ceremony and song, that has been documented in many forms of creative expression, whether it be on bodies, the sand, bark, or weaving, for example,” says Deputy Treaty Commissioner for the Northern Territory and NIFA 2020 judge Ursula Raymond. “If people truly engage with wearable art they can actually further their knowledge about the rich stories behind the piece and what they mean.”

As wearable art. Griffiths’ Legacy Dress represents the ancient practice of body design and ceremony, with each layer of the dress depicting a different aspect of her history and her Country. Griffiths was also highly praised for her strong leadership and position as a mentor within her community.

The NIFA prizes celebrate the vibrancy and originality of Indigenous designers and artists within the fashion industry, showcasing their unique approaches to interweaving contemporary design and traditional culture. With a combined prize value of $60,000, NIFA is an excellent platform to develop opportunities for Aboriginal and Torres Strait Islander designers, and in turn promoting diversity and innovation within the Australian fashion community.

Broadcast live by NITV and presented by Rachael Hocking, the award’s inaugural edition saw six artists, designers and collectives receive recognition for their contribution to the world of fashion.

The winners of the National Indigenous Fashion awards:

Peggy Griffiths, for the Cultural Adornment and Wearable Art Award – co-presented with DAAFF

Ninti One, for the Environmental and Social Contribution Award – co-presented with Northern Land Council

For more information on the award and this year’s winners, visit the NIFA website here.

And the NATSIAA winners are…
Scroll to top