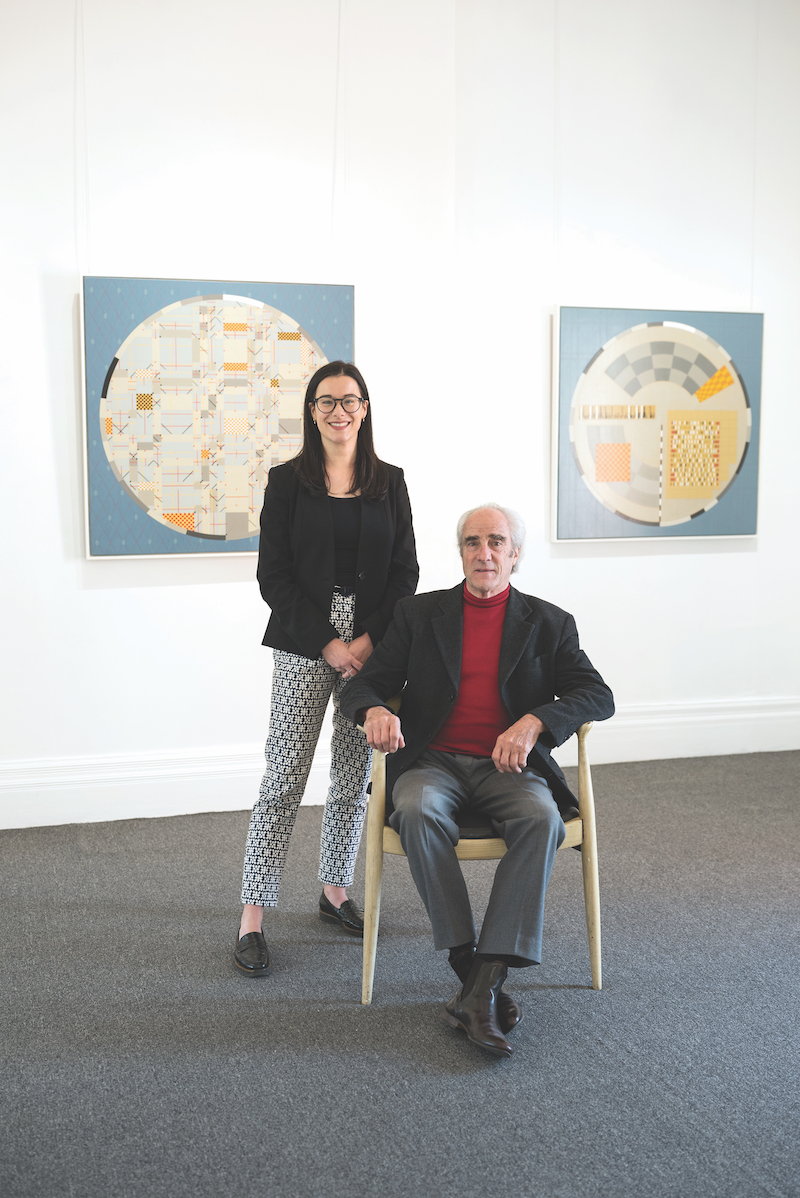 Portrait of a Gallerist: Charles and Kate Nodrum

In 1971, a young Charles Nodrum was working in a Melbourne bookshop when he decided he would prefer to be in an art gallery. “I thought it would be an elegant and comfortable way of life, living with and talking about art. It turned out not to be that way at all. It was hard work!”

Before coming to Australia in 1969, Nodrum had studied French and Spanish in Paris and Barcelona. He was born in England, to Australian parents. “Walking around the galleries in London, I realised I preferred abstract paintings to representational ones. It was only a vague impression but a watershed, because I’ve remained heavily focussed on abstraction ever since.” The year before he came to Australia, abstraction had been firmly placed on the national agenda with The Field (National Gallery of Victoria, 1968).

Nodrum had broad training – first working for collector and dealer Joseph Brown (1971- 75) and then as Christie’s Melbourne representative in Australia (1975-78). In 1984 Nodrum launched his own eponymous gallery. In 1988 he married Nati, his Spanish-born wife, and their two children, Anna and Kate were born in 1989 and 1991. The family was surrounded by art “from the age of nought – the house was always full of paintings,” Nodrum says. As the years went on both Anna and Kate worked at the gallery part-time as university students.

His focus was clear from the beginning. “The paintings I’d been collecting since I started with Brown were the only capital I had. I was most at home with those abstract paintings because, in the 1960s and 1970s, I was in my youth. They were my generation.”

During her childhood, Kate remembers, “being dragged to openings at the gallery. But then you become a teenager and then a young adult. All of a sudden you have an opinion on art. You have an understanding of history and art’s inherent value. Growing up surrounded by art made us very lucky.”

Her part-time work began in 2012, “doing the grunt work, packing, learning to catalogue, and doing the computer work that Dad was less interested in.” She became full time in 2015 and, in 2017, became manager. “Before that,” says Nodrum, “I used to wonder what I would do. Given that you can’t really sell a gallery, most end up closing down and losing the impetus built up over the years.”

Kate remains committed to her father’s interests in abstraction. “I have similar taste. I’ve inherited that, and appreciate the abstract work we show. He has really carved out a niche in the world of mid-century Australian abstraction and I plan to keep sharing [that]. It’s been a very gentle transition, Dad’s not going anywhere soon. I joke that he will leave the gallery feet first; he’s of a generation where your work is your passion.”

March 31, 2022
Blood sculptures that melt in the warm air on opening night, chewing gum soldiers that visitors tread across the gallery floor and jaffas that melt into hair gel are all exchanges of substances that are part of the process in Tim Silver’s artworks. To Edward Colless they form a poetic theme of sickening, contaminating love like the kiss of a vampire.
END_OF_DOCUMENT_TOKEN_TO_BE_REPLACED
https://artcollector.net.au/wp-content/uploads/2022/03/Tim_Silver-1_1-800q.jpg 531 531 AdrianaBorsey https://artcollector.net.au/wp-content/uploads/2021/11/Art-Collector-logos-transparency-WHITE-1080x1080px-2.png AdrianaBorsey2022-03-31 15:44:352022-03-31 15:44:35Artist Profile: Tim Silver

March 31, 2022
Makinti Napanangka, now over 70 years old, paints on the ground in the open air hunched over her canvas, her brushstrokes confident and instinctive. The efforts of her day’s work are eagerly sought by institutions and collectors all over the world. Jennifer Isaacs visited this prominent desert painter’s remote home base at Kintore, to watch her work.
END_OF_DOCUMENT_TOKEN_TO_BE_REPLACED
https://artcollector.net.au/wp-content/uploads/2022/03/Makinti2-800-sq.jpg 545 545 AdrianaBorsey https://artcollector.net.au/wp-content/uploads/2021/11/Art-Collector-logos-transparency-WHITE-1080x1080px-2.png AdrianaBorsey2022-03-31 15:25:222022-03-31 15:25:22Artist Profile: Makinti Napanangka