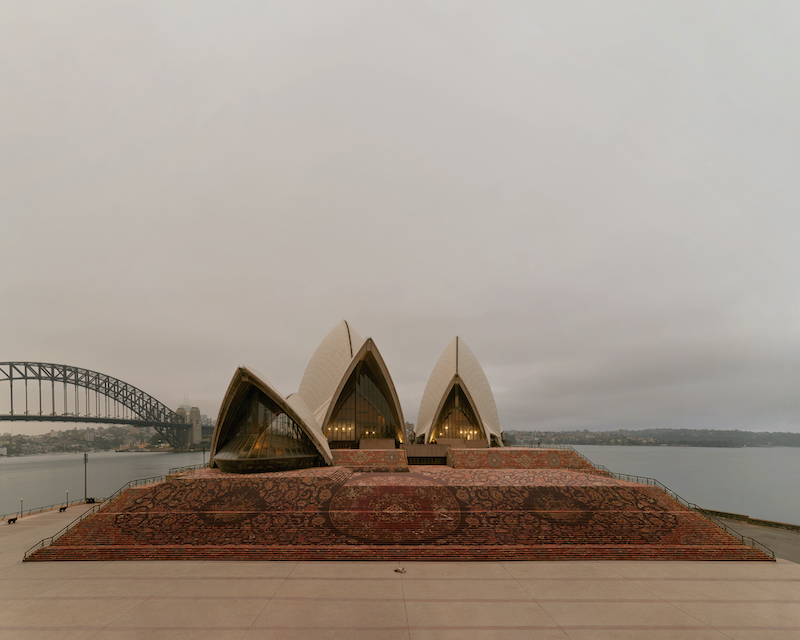 Melbourne-based artist transforms the steps of the Sydney Opera House.

Ahead of its debut this weekend, Antidote Projects unveils a new major work by Ukranian-Australian artist Stanislava Pinchuk.

Developed over two years, The Red Carpet documents an architectural intervention and performance work, including a large-scale photograph commissioned by the Sydney Opera House’s All About Women Festival, running from 7 to 8 March 2020.

The photographic work features an enormous Ukranian Bessarabian rug digitally transposed onto the steps of the Sydney Opera House. The carpet contains a data-map of the damaged topography of Kiev’s Maidan square protests, which marked the beginning of Ukraine’s illegal invasion, annexation and ongoing civil war.

In her work, Pinchuk explores the way landscapes contain the memory of political events, transforming the protest-induced cracks in the granite into delicate folds and textures. This intervention references the complicated histories of women documenting and mapping their own personal experiences of conflict through textiles. Exploring ideas of women’s domesticity and labour, Pinchuk looks at the complex relationship between the personal and the political, as expressed through site and place.

“I am elated to see the work come together after a phenomenal two-year production duration,” says Pinchuk. “Ultimately, The Red Carpet feels like a really exciting breakthrough for me as an artist – to new levels of scale, colour and architecture to my previously restrained, monochromatic works.

“The intervention references the histories of women documenting their personal experiences of conflict through textiles. The artwork acts as a metaphorical red carpet for the Sydney Opera House – acknowledging the history and labour of women’s domestic interiors as the art historical foundation leading to the existence of modernist starchitecture – such as Utzon’s Opera House.”

In the creation of this work, Pinchuk worked closely with the curatorial platform Antidote Projects. Inspired by the transformative power of contemporary art as a conduit in promoting social change, the organisation amplifies the power of artists as activists.

In addition to the large-scale photographic piece, Pinchuk also finished a suite of works for The Red Carpet, featuring paintings, architectural drawing studies and artist edition screen prints created during the two-year production process. These mixed media paintings will debut in April 2020 as part of the Dancing with the Dead group exhibition at the Lock Up in Newcastle.

The Red Carpet is presented at the All About Women festival at the Sydney Opera House on Sunday 8 March, along with a talk by the artist entitled The Thread of War. The work will be open to the public to view in the entry lounge.