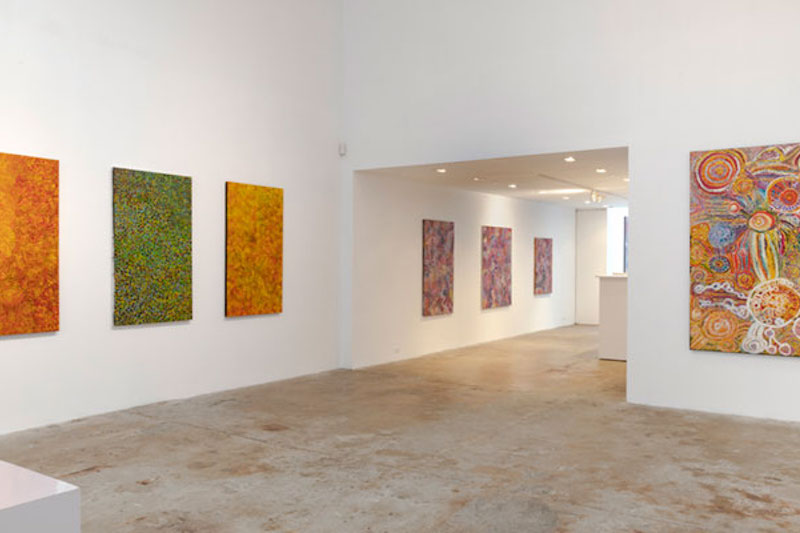 Olsen Gruin has hit the 18-month mark since opening its first doors. What are some of the winning hallmarks the gallery has experienced during the first 18 months?

The surprising thing about the New York experience is that I had no idea it was going to happen. It was only because my sister was moving her business that we had the opportunity for a pop-up. What began as an experiment was such a resounding success, it felt as though we had a place in the New York art scene.

We’ve had some landmark moments, like selling out our first show of McLean Edwards, welcoming some big-name collectors like Leonardo DiCaprio, or securing our Orchard St location in the Lower East Side that marked our growth and confirmed we were onto a good thing. It’s also been a great source of pride to introduce some of our Australian artists to a new market, particularly as they’ve all sold out!

What have been some of the struggles?

Establishing a strong network and getting the attention of the right curators and collectors was certainly the biggest hurdle. Director Emerald Gruin, who had worked for me in Australia but had also worked for Mary Boone in New York, was a great help as she’d been a regular on the art circuit for some time. She brought a lot of familiarity to the gallery, and already knew many collectors, artists, and gallerists, and built great connections.

We were also wary of allowing ourselves to simply become the Aussie gallery or the expats’ gallery of choice. I’ve barred the staff from using the word Australia, and I don’t think these first 18 months would have gone the way they have had we fallen back on parochial programming.

We are still a way short of being truly established, but over only a year and a half with a strong program that focuses on International art, we are being taken seriously.

There’s quite a large community of Australians here in New York at the moment. To what extent are you noticing that reflected in the exhibition and representation of Australian artists in New York-based galleries?

Australian representation in New York-based galleries is not as strong as it should be for the calibre of art Australian artists produce. Our photographers seem to have more of a presence.

It’s not where it should be, but I think we can see, through artists like Ricky Swallow, Del Kathryn Barton, or Jess Johnson, alongside our own artists, it’s a work in progress.

The New York Times just listed your current exhibition ‘Beyond the Veil’ on their esteemed ‘What To See In New York Art Galleries This Week’. The show is both a reflection and facilitator of Indigenous art further securing its place as a significant movement in the international art world. What was the process of showing an exhibition of Indigenous Australian works in New York City?

As my Godfather, Robert Hughes said: “Indigenous art was the last great art movement of the 20th century, which started 40,000 years earlier”.

Within Indigenous art, there is a subconscious structure in the horizontal plane, the innate qualities of drawing, and the creative process of mark making that Americans attuned to Abstract Expressionism find easy to read, and simultaneously challenge what they think they know.

As for the process, we worked to forge relationships with a number of the featured artists and collaborated with a selection of dealers to help build the exhibition. This show has now led to my own focus on artists from the APY lands, such as Nyurpaya Kaika, Yaritji Young, and Maringka Burton because I feel as though they have a strong place in the future of contemporary art on the world stage.

These days I now have a direct exclusive relationship with APY lands with Skye O’Meara with showing in New York with their artists. I avoid business with any questionable independent indigenous dealers. Provenance that shows that the artist and community is properly remunerated and protected from carpet baggers is vital and crucial.

The works in ‘Beyond the Veil’ are simultaneously contemporary and inexplicably historical, bound to a sacred cultural knowledge (helped kept sacred by artists in this exhibition). What has been the general public’s response towards the exhibition?

After Jerry Saltz’s review in ‘New York Magazine’, the staff turned up to people waiting at the front door. There’s been a steady flow of art lovers, curators, and collectors. The way the critics have described the show has fit ‘Beyond the Veil’ into the larger framework of the New York gallery scene, and audiences have responded.

What has the journey been like for the New York City art market versus your experience as a gallerist in Australia?

My team and I have worked very hard to establish a strong identity for Olsen Gruin that offers a fresh program of high calibre international artists, and collectors have responded to that.

When you walk into a gallery, there are always hidden or subtle details in a good gallery that indicate the gallerist knows what they are doing. A lot of collectors who have no idea who I am, or what the gallery is, are able to sense that we have a knowledge of how to run a business.

I think this has certainly been aided by our move to the new Orchard St gallery, which has the capacity to really showcase serious art, and the location and space go a long way in benchmarking the calibre of the gallery.