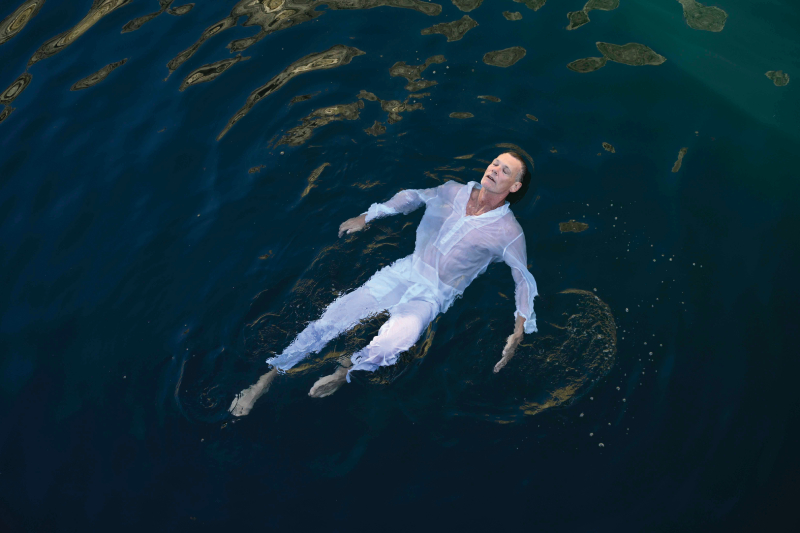 Andrew Hazewinkel: The Next Life

An ancient city, a modern life. The work of Andrew Hazewinkel arrives at a liminal space between the folds of time.

In one direction was the grand entry to the old city of Rome. In the other were the banks of the Tiber, where the familiar city and its ancient landmarks gave way to the muddy and overgrown banks of the river.

It was 2006 and the Australian-born artist Andrew Hazewinkel had arrived in Rome on an Australia Council residency. Hazewinkel made a fateful choice: “I felt overwhelmed by the gravity of the stacked stones of the city, the sheer weight of its histories of power, devotion and violence,” he recalls. “I turned away from the city, toward the river, which offered a very different way in.”

It was on a series of walks along the Tiber on his first days in Rome that the artist discovered temporary communities living at the edges of the river. It was this contrast between the history of Rome and its lived reality that would prove to shape Hazewinkel’s thinking.

“I became aware of an entangled, materially paradoxical relationship between vulnerability and stone, and about grand sweeping historical narratives,” he says”. “I started to think about it as a socially and institutionally shaped entanglement between ephemerality, vulnerability and the authority collectively invested through the ages in stone.”

The experience inspired Hazewinkel’s Domus Sub/Merge, a 2006-2009 photographic series that combined the artist’s images of the traces of temporary habitation with archival imagery. It was this exploration of the contemporary and the historical, the cultural values of the museum collection, and the nature of venerated objects of the past, that has informed Hazewinkel’s work ever since.

Opening in early 2022 at Sumer Gallery in Tauranga, New Zealand, is Hazewinkel’s Lifeworld of Stones (displacements I-X), a suite of ten large photographic works that the artist produced from 2010 through to 2020.

Each work consists of three images – an image sourced from an archive of late 19th/ early 20th century photographic material assembled by a dealer of antiquities who was a European agent to the Metropolitan Museum of Art in New York between 1906 and 1928, an image by Hazewinkel of the same object in The Met Collection, and a third image of the place where the object was originally found, also by the artist. “The works can be considered part of my ongoing consideration of the contemporary social legacies of ancient objects, stories and archetypes,” says Hazewinkel “…or perhaps better put, the contemporary social afterlife of ancient objects, stories and archetypes.”

Hazewinkel now lives in Athens, Greece, a place where the past is considered to be a living part of the present. “Athens is an amazing city,” he says. “I live in a neighbourhood called Kerameikos which is on the fringe of my favourite archaeological site, the ancient cemetery. It isn’t an excavated site, it didn’t need to be excavated, it was never buried… it is an original ancient landscape in the centre of a contemporary city.”

It’s this blend of the past and the present that forms the centre of Hazewinkel’s practice. “History and the present are much less easy to separate than commonly thought,” he says. “I think of them as being active, mutually informing co-contributors, and in this way they shape the multitemporal dimensions that we all inhabit.”

Working consistently since the early 2000s, Hazewinkel’s ongoing investigations, including works in photography, video and sculpture, have been exhibited widely in Australia, New Zealand, and across Europe, in a variety of commercial gallery shows and curated exhibitions, including in The National in 2019 at the Art Gallery of New South Wales, Sydney.

Hazewinkel’s sources of inspiration have also been evolving. “Over time my [interests] have developed and changed shape through various bodies of work and academic research,” he says. “Recently I’ve been working with museological collections and modes of display of 1-to-human scale broken figurative sculpture. I am interested in drawing out embodied tensions between broken stone bodies of the deep past and our own soft ephemeral bodies. I think it’s important to appreciate that the body of work titled Journeys in the Lifeworld of Stones (displacements I-X) both is and isn’t new work in that I have been working on it for about a decade through many twists and turns of thinking, making and remaking.”

As an artist who has been active in the local art scene in Melbourne for more than a decade, Andrew Hazewinkel is someone whose work I’ve been aware of for a long time. A body of work that stands out as particularly memorable was Head Replacement Therapy which Dr Kyla McFarlane included in her 2012 exhibition at the Centre for Contemporary Photography, Melbourne. The year later, I was involved in Hazewinkel’s participation in the exhibition Melbourne Now at the National Gallery of Victoria, Melbourne.

Over the past twelve months since he has been based in Athens, Hazewinkel has been continuing his research into antiquities and experimenting with various media including ceramics. I’m excited to see where this takes him. The strength of Hazewinkel’s work lies in its ability to cut across time and space, merging the ancient with the contemporary.

We started working with Andrew last year. He is an artist of startling intellect and sensitivity. He is also very genuine and lives for his work. When you find an artist that is so utterly dedicated to what they do, this enthusiasm is often infectious. His work resonates strongly with our contemporary understandings of society and politics, as well as our sense of self.

I’m of the opinion that, at this point in time, it is incredibly difficult to make photographic work that truly engages. Andrew is able to do this with seeming ease.

The works in his upcoming exhibition with us are available in an edition of three, with the first of each edition priced at NZ $11,000 (AUD $10,500) each. Prices will increase as the editions sell out.

I think that the audience for Andrew’s work is quite broad. There are collectors that have a specific interest in the classical world and its art, who appreciate its scholarly aspect, and there are also collectors that focus on photography, and there will be others that simply fall in love with the images.

March 31, 2022
Blood sculptures that melt in the warm air on opening night, chewing gum soldiers that visitors tread across the gallery floor and jaffas that melt into hair gel are all exchanges of substances that are part of the process in Tim Silver’s artworks. To Edward Colless they form a poetic theme of sickening, contaminating love like the kiss of a vampire.
END_OF_DOCUMENT_TOKEN_TO_BE_REPLACED
https://artcollector.net.au/wp-content/uploads/2022/03/Tim_Silver-1_1-800q.jpg 531 531 AdrianaBorsey https://artcollector.net.au/wp-content/uploads/2021/11/Art-Collector-logos-transparency-WHITE-1080x1080px-2.png AdrianaBorsey2022-03-31 15:44:352022-03-31 15:44:35Artist Profile: Tim Silver

March 31, 2022
Makinti Napanangka, now over 70 years old, paints on the ground in the open air hunched over her canvas, her brushstrokes confident and instinctive. The efforts of her day’s work are eagerly sought by institutions and collectors all over the world. Jennifer Isaacs visited this prominent desert painter’s remote home base at Kintore, to watch her work.
END_OF_DOCUMENT_TOKEN_TO_BE_REPLACED
https://artcollector.net.au/wp-content/uploads/2022/03/Makinti2-800-sq.jpg 545 545 AdrianaBorsey https://artcollector.net.au/wp-content/uploads/2021/11/Art-Collector-logos-transparency-WHITE-1080x1080px-2.png AdrianaBorsey2022-03-31 15:25:222022-03-31 15:25:22Artist Profile: Makinti Napanangka