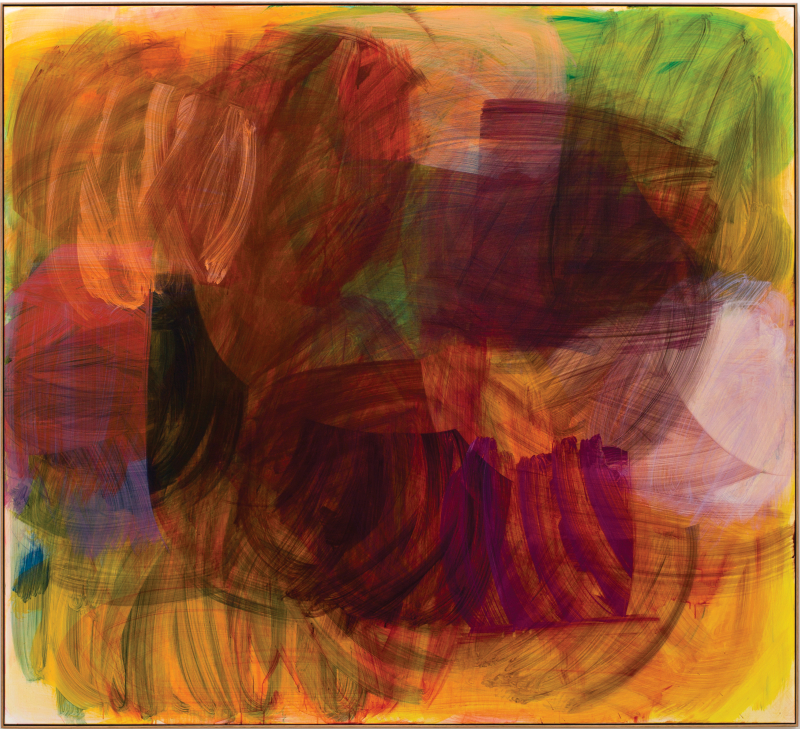 Gemma Smith is a gamer. She courts us into her arena, controls us and outwits us before changing the game we didn’t even know we were playing.

In ways she cannot entirely predict, Gemma Smith’s paintings are always surprising. They are generally exuberant, brushy, seemingly energetic; colours are mostly sumptuous, saturated; occasionally there are misty pale veils. Whatever their eventual appearance — and here lies the productive conundrum of her work — Smith’s paintings are born of a studio method that is as disciplined and thorough as it is deliberately and consistently subverted. Smith plays between unstable poles: controlled studio research, and deliberate leaps into new territory. She is a gamester, and doubly so: she first outwits herself, then challenges us to decipher her gambits.

Colour is crucial. Smith is a long-time student of colour histories and theories, but from the time of making the large wall-painting Triple Tangle in 2018, at the Museum of Contemporary Art in Sydney, she has become more systematic about colour choices. She refers to manufacturer’s paint cards, and consults colour wheels, but colour also enters her painting from memories of the world. Once committed to her choices, Smith relishes what she calls “the rigour of seeing how things play out.” This self-imposed play reminds me that Smith once painted on wooden chessboards, aligning her creative process with the game’s protocols. In Margin, 2020, golden tones overlay warm reds, and an assertive green. Our task is to retrace the game-play – if we can.

This delight in outwitting one’s own processes helps explain Smith’s love for the experimental attitude of the American writer George Saunders, to whom the largest recent painting is dedicated. Open Forever (for George Saunders), 2021, is a magnificent response to his oft-quoted injunction to cultivate reinvention, to “stay open. Forever.” (His previous sentences read “Try to remain permanently confused. Anything is possible.”) To make this apparently effortless work, Smith spent four months slowing her studio method right down: she prepared with exercises, sometimes using a colour swatch, or a particular picture, or a single colour for an entire day.

Then there is the choice of paint. With recent works, like Triple Riff, 2021, Smith overlaid her characteristic swathes of thin acrylic with one solid patch of oil: abrupt, unexpected, a sharp light green jumps out of the frame. With oil, Smith can brush paint on then wipe off: there’s the on-going option of transformation, until the moment, arrived at slowly, when the final shape is committed to beautiful opacity. With the diminutive Attune, 2021, almost the entire canvas is covered with oddly jostling shapes that occlude the washes below, yet are always related to those markings. Sharp bright greens and oranges, several lilacs, oddly sober chestnut, indigo, brown: none has priority, but all are essential to the final composition.

Since returning in 2014 from several years in the United States, Smith has exhibited regularly at her representative galleries: Sydney’s Sarah Cottier Gallery, Brisbane’s Milani Gallery and Auckland’s Starkwhite. Over more than 20 years, she has built a formidable repertoire of knowledge and studio technique. But hers is not a story of incremental development. Like the best game-players, Smith is always on the move: she switches methods, doubles back on her herself, changes appearances. It takes courage.

March 31, 2022
Blood sculptures that melt in the warm air on opening night, chewing gum soldiers that visitors tread across the gallery floor and jaffas that melt into hair gel are all exchanges of substances that are part of the process in Tim Silver’s artworks. To Edward Colless they form a poetic theme of sickening, contaminating love like the kiss of a vampire.
END_OF_DOCUMENT_TOKEN_TO_BE_REPLACED
https://artcollector.net.au/wp-content/uploads/2022/03/Tim_Silver-1_1-800q.jpg 531 531 AdrianaBorsey https://artcollector.net.au/wp-content/uploads/2021/11/Art-Collector-logos-transparency-WHITE-1080x1080px-2.png AdrianaBorsey2022-03-31 15:44:352022-03-31 15:44:35Artist Profile: Tim Silver

March 31, 2022
Makinti Napanangka, now over 70 years old, paints on the ground in the open air hunched over her canvas, her brushstrokes confident and instinctive. The efforts of her day’s work are eagerly sought by institutions and collectors all over the world. Jennifer Isaacs visited this prominent desert painter’s remote home base at Kintore, to watch her work.
END_OF_DOCUMENT_TOKEN_TO_BE_REPLACED
https://artcollector.net.au/wp-content/uploads/2022/03/Makinti2-800-sq.jpg 545 545 AdrianaBorsey https://artcollector.net.au/wp-content/uploads/2021/11/Art-Collector-logos-transparency-WHITE-1080x1080px-2.png AdrianaBorsey2022-03-31 15:25:222022-03-31 15:25:22Artist Profile: Makinti Napanangka