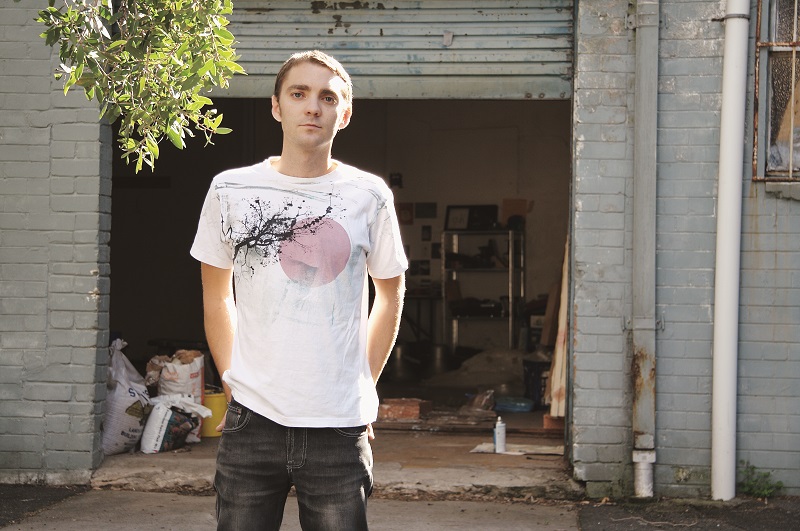 Tim Silver: Kiss of the vampire

Blood sculptures that melt in the warm air on opening night, chewing gum soldiers that visitors tread across the gallery floor and jaffas that melt into hair gel are all exchanges of substances that are part of the process in Tim Silver’s artworks. To Edward Colless they form a poetic theme of sickening, contaminating love like the kiss of a vampire.

You will know Tim Silver’s work. It’s as unforgettable as it is irresistible. Take his cute little toy cars or his life-size skateboard, guitar and Vespa motor scooter, which are exquisitely moulded out of soft drawing crayon. They’re not only beautiful; they’re also luscious. The sculptures – crayon melted down and cast like fine chocolates – have the texture of marzipan or fudge. They look like fantastic, lavish pieces of soft candy. It’s not just a wild association. This is an artist who has even used bubblegum and fairy floss as sculptural material. But what you might now realise is that the charm of these sweet objects betrays a vigorous taste for a very different kind of indulgence. Something closer to a splatter movie than to Willie Wonka’s factory.

Many of Silver’s objects are crafted from a mass market art material, Crayola – lots of it – which tends to be more associated with knockabout kid’s playrooms than professional art studios. And these works seem as physically fragile as they are aesthetically delicate. Move them even slightly and they’ll rub off on you or leave a guilty skid mark, like a snail trail along the floor. It’s a seductive dare against the protocol and prohibition on touching. After all, you might imagine these objects marketed in a gift shop as oversized, novelty drawing sticks. But they have more of a power to fascinate than that. In a way that is dangerously alluring, we’re compelled to look at them in a way similar to a chocolate Easter rabbit! Not just novelties, they are consumable fetishes. And every smear they leave is as much a stigma, a kind of dirty stain of consumption (like a ring of chocolate on a child’s lips), as it is the erosion of the art by its traffic and trade in the art world.

Silver’s method is all about this process of necessary decay, a decomposition that paradoxically gives life, in a sort of resurrected state, to the work of art. For his graduating Honours year show at Sydney College of the Arts at the end of May 1997, Silver displayed frozen jigsaw blocks of his own blood. (“A lot of it!” he exclaims. “And not that easy to get.”) The Britpop artists Marc Quinn has, of course, manufactured his notorious self-portrait in a pint of his blood; however, like Walt Disney’s legendary cryogenic head, Quinn’s was required to be permanently installed in a carefully maintained freezer cabinet. Silver’s “self-portrait” in blood was less of a laboratory work and more of a ghoulish ice confectionary. A vampire’s summer treats, allowed to melt through the warm opening night. The exhibition proper displayed what was left over: bloodstained podiums, as if the artwork had been created out of some ritualistic sacrificial slaughter. Whatever had been offered on these altars as the food of the gods had been consumed, leaving behind only this lurid and obscene spillage. And so the carnivorous gods of art were – for the moment – satisfied.

“I’d been painting through my first years at Sydney College of Art,” Silver recalls, “and doing some pretty bad stuff. Bad Picassoesque nudes. The sort of thing I’d done for matriculation in Hobart, before I moved to Sydney.” What shook him out of that adolescent stage was the migratory experience of undergraduate life. It’s the customary complaint of art school students. For Silver, each new household he moved into in Newtown or Glebe or Darlinghurst had to accommodate a growing and penitential burden of canvases under the bed or leaning in stacks against the wall. Inspired by the sort of grunge art that had emerged forcefully and brilliantly in Sydney in the earlier 1990s, work by Hany Armanious and Adam Cullen being particularly notable for Silver, he decided in his third year at art school to ditch the medium and started working with commonplace, ephemeral and inexpensive materials. The small cabinets filled with hair gel and Jaffas from his first solo show, held that year at First Draft, also insisted on chance and fugitive effects over time. For the duration of the show, the orange dye was leached out of the lollies into the viscous gel, like a polluting but sweet stain.

The exchange between substances, as one gets consumed by the other and parasitically generates an aesthetic effect, is a process as well as a poetic theme – of sickening, contaminating love – that occurs also in the work of Silver’s favourite artist, Felix Gonzales-Torres. In that artist’s most celebrated work, exhibition visitors are invited to nibble away at a monumental display of sweets, offered as a gift. Gradually, the sweets disappear, substituted by their flimsy, empty gold wrappers that are left behind as waste. “There’s a poetic quality in his work,” says Silver, “that is precise but open as well. The viewer is a direct participant in the completion of the work, by their action with the familiar and everyday materials used in it, by the associations they make with those materials.”

But if Gonzales-Torres provides a reference point, Silver has quickly and confidently moved along his own trajectory. Few of Silver’s works are actually interactive in the way that his mentor’s might be. A squad of action-man toys, cast in coloured chewing gum was squashed or splattered underfoot as each of its minuscule macho men ineffectually crawled for cover across the floor of the GRANTPIRRIE Gallery on the opening night in 2003. This was an acerbic artistic joke, and also a sort of schoolboy prank suggestive of dropping a gob of gum on an unsuspecting teacher’s seat. While socialising on the night, the patrons get the art stuck on the shoes the way they could skid on a dog turd on the pavement. The work acquires its form from the artist’s dedicated drudge of chomping the gum into a malleable substance. But it acquires its value from the reversal of that process, from the increasingly disfiguring imprints of the gallery visitors, each time one of the crawling human figures – which begin to resemble diminutive and desperate Giacometti sculptures – is smeared under and scraped off a shoe.

The destructive effects of the interactions that shape Silver’s works are actually far from the melancholic idiom of Gonzales-Torres. And while his work is shrewdly concerned with the aesthetics of simulation — with the hyperrealist displacement and supplanting of objects from everyday life — Silver equally demonstrates a fondness for the sort of theatrics associated with slapstick or comic horror. The rubber replica in pale blue of a full set of his clothes messily dumped on the floor is an illustionistic piece of trickery as well as a clever conceptual game. “I was interested in making something that was floppy enough to look like the original, like it could be picked up and unfolded, he explains. “But the folds are set, permanent even though they lie around casually on the floor just as I dropped them. You can’t do anything with them. And I had to cut my clothes up to get them out of the silicon mould. I had to destroy them in order to make their copies. I like the tension in that.”

There’s tension, too, in the way the clothing looks as if it’s had the colour drained from it, bleached out by the same vampiric reagent that caused its metamorphosis into rubbery pancakes or cow pats. The effort to render something permanent requires a sacrifice. But what art duplicates is the sacrifice rather than the object. The artist’s cast off and dirty clothes survive the process of their realistic depiction, but in a zombie-like state. Like a creature that is brain-dead, yet refusing to go away. A stubborn stain. The artwork is a staged resurrection of the everyday object which had been consumed by the artistic process. Art is what it eats. And it’s not exactly driven by a healthy appetite. This recycling doesn’t make for a functional eco-system, but rather a vampiric feast: a domain of the lush undead.

The vampire, indeed, has emerged as a literal figure in Silver’s latest work, which was installed at GRANTPIRRIE in June and will be at Karen Woodbury Gallery in September this year. In a series of five photographs a crumbling human corpse suddenly lurches up out of its shallow grave in outer suburban bushland, like a murdered backpacker seeking revenge. But its body is now made of the dirt it’s been buried in, and no sooner does it revive than it spastically crumbles back into dust. Silver’s taste here is for the lurid cinematic pleasures of 1970s movies by schlock horror director Lucio Fulci. In another series of photos and accompanying video, a corpse washed up on a beach is gruesomely eroded by the waves. This victim’s flesh and bones are made from the beach’s own sand, meticulously cast from a medical skeleton and a body cast and destroyed in only a couple of hours of the relentless incoming tide.

Silver’s zombies are entropic rather than static, and they are a subculture in a new breed of zombie. From Dr Caligari’s alter-ego, the somnambulist Cesar, through the Universal Studios and Hammer horror films of the Mummy, the zombie had been characterised by an uncanny doubling of seductive sexuality. Count Dracula’s victims were depicted as servants of his lust for virgin blood. They were hypnoid and hypnotic, pallid libertines or cold sentries on the gates of sexual mysteries and frenzies. The confusion of life and death in these zombies was alluring and enigmatic. However, what drives contemporary zombies – in both computer games and movies, like the infected staff of the research institute in “Resident Evil” – is a lucid vengeance against the living that is as lacking in seduction as the last words of a suicide bomber. Their singular need to devour living flesh gives this new mutation of zombies a solidarity they never had before; and makes them clearly distinguished from the living, whom they inevitably outnumber. The living are now minority rebels, struggling against a new cannibalistic population, a leaderless and asocial empire. The living are the anachronisms in this new world order. Silver’s zombie objects and creatures are both the ceremonial artefacts of such an empire, and the emblems of a new aesthetic principle.

Tim Silver will be showing Killing me softly at GRANTPIRRIE, Sydney until 8 July 2006 and at Karen Woodbury Gallery, Melbourne from 6 to 23 September 2006. From 9 to 23 August 2006 at Firstdraft gallery Tim Silver will recreate his first solo exhibition.

This article was originally published in Art Collector issue 37, July-September 2006.

March 31, 2022
Blood sculptures that melt in the warm air on opening night, chewing gum soldiers that visitors tread across the gallery floor and jaffas that melt into hair gel are all exchanges of substances that are part of the process in Tim Silver’s artworks. To Edward Colless they form a poetic theme of sickening, contaminating love like the kiss of a vampire.
END_OF_DOCUMENT_TOKEN_TO_BE_REPLACED
https://artcollector.net.au/wp-content/uploads/2022/03/Tim_Silver-1_1-800q.jpg 531 531 AdrianaBorsey https://artcollector.net.au/wp-content/uploads/2021/11/Art-Collector-logos-transparency-WHITE-1080x1080px-2.png AdrianaBorsey2022-03-31 15:44:352022-03-31 15:44:35Artist Profile: Tim Silver

March 31, 2022
Makinti Napanangka, now over 70 years old, paints on the ground in the open air hunched over her canvas, her brushstrokes confident and instinctive. The efforts of her day’s work are eagerly sought by institutions and collectors all over the world. Jennifer Isaacs visited this prominent desert painter’s remote home base at Kintore, to watch her work.
END_OF_DOCUMENT_TOKEN_TO_BE_REPLACED
https://artcollector.net.au/wp-content/uploads/2022/03/Makinti2-800-sq.jpg 545 545 AdrianaBorsey https://artcollector.net.au/wp-content/uploads/2021/11/Art-Collector-logos-transparency-WHITE-1080x1080px-2.png AdrianaBorsey2022-03-31 15:25:222022-03-31 15:25:22Artist Profile: Makinti Napanangka