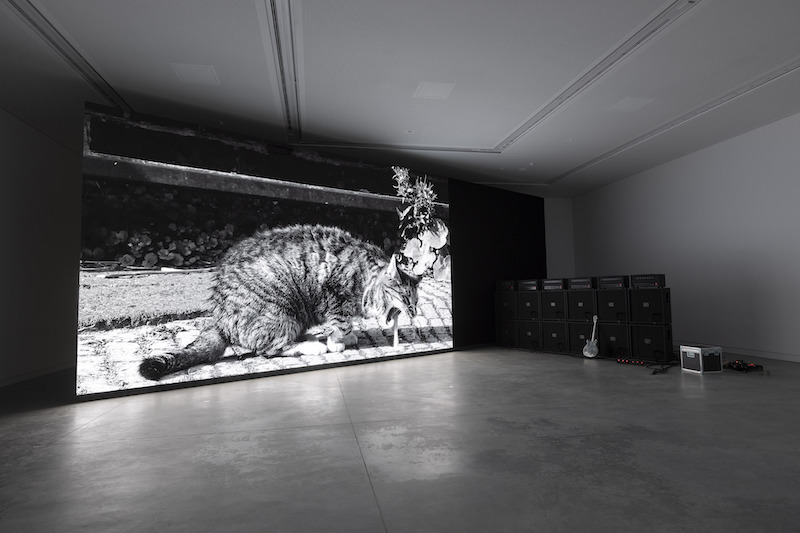 Australia and New Zealand pavilions open at the Venice Biennale

For the 59th Venice Biennale, New Zealand and Australia have opened their pavilions with a bang.

The Australian and New Zealand pavilions opened to eager viewers over the weekend, as art world crowds flocked to the Venice’s canal-lined streets for the opening of the 59th Venice Biennale.

In the Giardini, Australia is presenting Marco Fusinato’s DESASTRES, curated by Alexie Glass-Kantor which comprises an experimental noise project that synchronises sound with image and takes the form of a durational solo performance as installation.

“My idea of activating the audience is to remind them that they are alive. That they have a pulse,” says Fusinato.

Fusinato will perform live in the pavilion using an electric guitar as a signal generator into mass amplification to improvise slabs of noise, saturated feedback and discordant intensities that trigger images.

“DESASTRES is a monster,” says Glass-Kantor. “A banquet of images that range from the benign to the blatant, absurd, twisted, sublime, bonecrushing and tense. The images build accumulatively, treading judiciously between chaos and intent. The audience for DESASTRES are witnesses who can no longer observe, singularly, anything. The perennial image.”

Kihara is the first artist from New Zealand to present at the Biennale who is Pasifika, Asian and Fa’afafine (a person who identifies themselves as having a third gender or non-binary role in Samoan society), making their debut at the 59th Biennale one to take note of.

“Eight years in the making, the exhibition explores the ongoing Sāmoa-New Zealand relations from a Fa’afafine (Sāmoa’s ʻthird gender’) perspective,” says the artist. “Paradise Camp was first inspired by an essay by Ngahuia Te Awekotuku presented at the Paul Gauguin Symposium held at the Auckland Art Gallery in 1992, and was further developed after viewing Gauguin paintings at the Metropolitan Museum of Art, New York on the occasion of my solo exhibition at the MET in 2008.”

Within Paradise Camp, themes such as small island ecologies, climate change, queer rights, Gauguin’s gaze, intersectionality and decolonization are explored and disseminated to audiences. The work comprises twelve tableau photographs featuring a cast of Sāmoan Fa’afafine, repurposing and upcycling selected paintings by the late post-impressionist artist Paul Gauguin. Shot and filmed on location in Upolu Island, Sāmoa, Kihara’s performative photography is presented against a wallpaper of a landscape destroyed by the 2009 tsunami, and alongside First Impressions: Paul Gauguin – a five-part talk-show series commissioned by Fine Arts Museum of San Francisco and Ny Carlsberg Glyptotek, Copenhagen in 2019, where a group of Fa’afafine comment wittily on select Gauguin paintings.

Caren Rangi, Commissioner of New Zealand’s presentation at the 2022 Biennale and Chair of the Arts Council of New Zealand Toi Aotearoa says, “The Arts Council, like the rest of the art world, is acutely aware of the need to pivot digitally in response to the impacts of Covid-19. Over a year ago, Yuki and her team commenced work on a wide range of digital content and the Arts Council has worked with a digital partner, Digital Arts Network, to create a digital component that allows audiences to watch and hear Kihara speaking to her research and creation process, and Paradise Camp themes and stories. We’re excited to establish a partnership of this nature for the first time – marking yet another first for the New Zealand pavilion.”

A companion publication to the exhibition has been published by Thames and Hudson and edited by Natalie King. Exploring the interwoven strands running through Kihara’s Paradise Camp, the book featured commissioned contributors from around the world. King says, “The book charts Kihara’s alternative, queer world that is both confronting and hypnotic in its humanity, while redrawing the afflictions of colonisation.”

The 59th International Art Exhibition – La Biennale di Venezia is open to the public from 23 April to 27 November 2022.