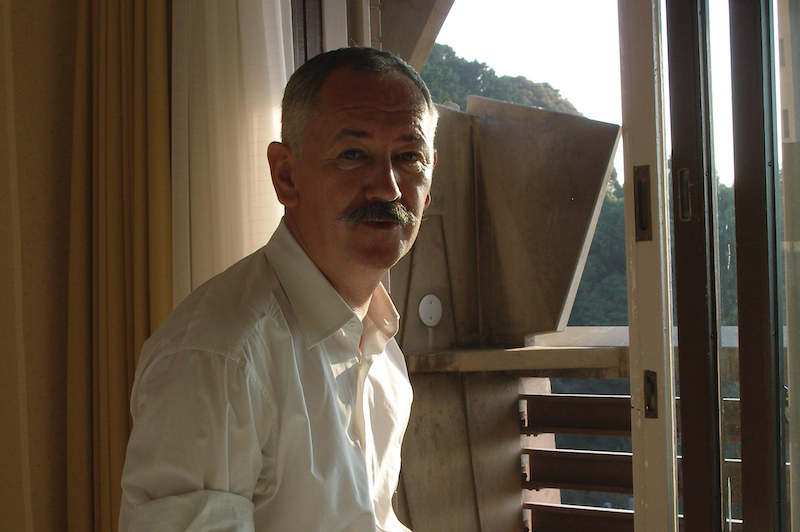 Cerith Wyn Evans’s interests range far and wide, from particle physics to the power of grammar.

A discussion with Cerith Wyn Evans is a journey into deep thought, punctuated by playful references and sharp observations. As he flows between musings on punk rock, particle physics, famous last words and psychoanalysis, one quickly begins to see his immense capacity for communicating complex ideas in the clearest of ways. The Welsh artist’s conceptual practice, which spans over 25 years, distils linguistics, psychology, phenomenology and philosophy into highly refined and seductive forms, activating the possibilities of perception and creating relationships between objects, ideas and the viewer.

“Even though the work might look very sparse,” he explains, “I think the abundance is somewhere else … Allow yourself time to reflect and see that things don’t all happen at the same time; on reflection and on return to something it will have changed and it will have transmogrified. Things don’t keep standing still.” His philosophical and phenomenological interests stem from his study of linguistics. As he notes: “The future anterior tense is always very important to me, the sentence that says ‘by which time we will have already’. It has an extraordinary way of projecting into the future.”

This is exemplified in a work from 2010, Elective Affinity. Here, suspended on the wall, a line of text in neon quotes novelist William S Burroughs and asks us to: “Look at that picture, how does it seem to you now… Does it seem to be persisting?” We are directed to retrace our steps and reconsider our previous encounters. The title is derived from Goethe’s 1809 novel Elective Affinities and is the scientific term to describe how substances combine selectively. Goethe employed the term as a metaphor to suggest that chemical laws govern human passions. However, for Wyn Evans the title of this neon piece is a humorous nod in the direction of Goethe’s supposed last words: “More light.”

“I’ve had a lot of fun playing with titles over the years,” he explains. “Somehow the title is also part of the material … Very often they are quotes from different things and the trainspotters amongst us can go and find it somewhere else.” Following the trail that Wyn Evans leaves could lead you anywhere from Guy Debord to John Cage, from the work of conceptual artist Bas Jan Ader or the philosopher Maurice Merleau-Ponty, whose writing has been an ongoing influence on his practice.

This April will mark the first solo exhibition of Wyn Evans’s work to be staged in Australasia, with a major installation across two collaborating Auckland galleries, Hopkinson Mossman and Michael Lett. It is astonishing that Wyn Evans’s practice has not been more widely exhibited in the region, two exceptions being a 2013 commission for 161 Castlereagh Street in Sydney curated by Barbara Flynn and an appearance in Gary Carsley’s Take a Bowery at the Museum of Contemporary Art in Sydney in 2004. The upcoming – and aptly as yet untitled – Auckland show seeks to redress this absence, including both new and existing works and benefitting from the experience of gallery directors Danae Mossman and Andrew Thomas, both formerly of White Cube, London, where Mossman was artist liaison for Wyn Evans.

“It is exciting thinking that connections are being made that are fresh and bonds are being made between the two spaces,” Wyn Evans enthuses. “Given that things are at a certain distance or at a remove … new meanings emerge.”

Born in 1958 in South West Wales, Evans moved to London in 1976 to attended St Martins School of Art and later the Royal College of Art. “It was a very exciting time to be a young person right bang in the centre of London,” he remembers. “Punk rock was happening and you had this extremely powerful energy … It really felt that there was a sort of explosion of creativity and that seemed very, very liberating.” He became an assistant to filmmaker Derek Jarman, working with him on the iconic Caravaggio (1986), and creating his own experimental films such as Degrees of Blindness (1988) with Tilda Swinton.

He turned to conceptual practice in the 1990s, working across installation, sculpture and sound, always with an eye to proportions and site- specificity. Cinematic references continue to resonate throughout his work both overtly and subtly. As he explained in a 2010 interview with Serpentine Galleries’ Hans Ulrich Obrist: “I can’t help but wonder what role the subject plays in the scene beyond the one that is produced. My work entertains the scenario in which the subject is dispersed across the fantasy.”

Exploring the point where fantasy and reality meet, over the past three years Wyn Evans has been visiting the physics laboratory in CERN in Geneva where he has been introduced to scientific ideas relating to probability theory, matter, dark matter, antimatter and connectivity. “All these things have very powerful resonances across all sorts of relationships – object relationships, the conversation that happens as soon as you introduce one object to another … you create a dialogue which forms something like points in a hologram, you form a third through the combination of the first two. Burrows would call it a third mind,” he explains.

From physics to architectural polytopes, this year Wyn Evans will complete a commission from Bernard Arnault for the new Fondation Louis Vuitton building in Paris, designed by Frank Gehry. His contribution will be a new sound piece. Considering the influence of music theorist and architect-engineer Iannis Xenakis on Wyn Evans’s work, this site-specific commission is greatly anticipated.

Returning to the possibilities presented by the Higgs boson, I ask what his fantasy work might be and he confides playfully: “I’m nympholeptic. It comes from nymph. Essentially a nympholept is someone who has an incurable desire for the impossible.”

However, on the Sunday morning when I speak with him, his immediate task is to return to three objects that await his attention: “I have a sitar, a gong and a big telescope sitting in the room just waiting to have a conversation.”

Cerith Wyn Evans’s work is exhibited at two Auckland galleries, Michael Lett and Hopkinson Mossman, from 11 April to 10 May 2014.

An invaluable first-hand account of the work of Cerith Wyn Evans can be found in the discussions conducted with the artist by curator and master of the interview Hans Ulrich Obrist. Most notable is Cerith Wyn Evans/Hans Ulrich Obrist: The Conversation Series, published in 2010, which documents their meetings from the Hotel Metropole Bar in Brussels in 2002 through to a train ride taken together to Milton Keynes in 2009. “I met him in 1995 when we did research for the show Live Live which I curated for the Museum of Modern Art of the city of Paris,” Obrist remembers. “Cerith is a 21st century visionary, a great visual artist, a great filmmaker, a great poet, a great writer and great thinker. He always goes beyond the fear of pooling knowledge.”

What did he learn from the artist during their time working together and their many hours of discussion? “Cerith taught me immense courage, as Jean Rouch always said we need immense courage.” And what does he look forward to in his next encounter with the artist’s work? “The wonderful thing about Cerith is that we can never predict the next step, it’s as Diaghilev and Cocteau said ‘Etonnez moi!’ (Astonish me!)”. It’s permanent surprise.”

Prior to returning to New Zealand, Danae Mossman worked at White Cube in London where she was artist liaison for Cerith Wyn Evans, working closely with him for a number of years. “It was fascinating to see the way he opens up space in his installations,” she remembers, “transforming spaces already laden in history into portals for people to cross through into another imaginative realm. I found it hugely inspiring unravelling the layers of meaning and intent in what at first appear to be very minimal works.”

She continues to be fascinated by his work, noting: “It is quietly radical. The practice is so rich and refined and visceral. In spite of the cool conceptual form, the work is deeply passionate.” The exhibition will no doubt generate significant interest from collectors and institutions, as Mossman explains: “His work is held in some of the most important international collections both public (such as the Tate national collection) and private worldwide … [and it] has a strong international market appeal. Hopkinson Mossman and Michael Lett galleries are both committed to generating opportunities for collectors to develop significant international collections and the debut of Cerith Wyn Evans fits perfectly with this.” Works will be priced between AUD$12,000 and AUD$200,000.

Andrew Thomas was also with White Cube in London, where he first encountered Cerith Wyn Evans’s work. “Aesthetically everything he makes is incredibly beautiful, the content of the work is highly emotive and the experience of it very sensory – these things captivate me,” he says.

The collaboration between Michael Lett and Hopkinson Mossman was one of fortuitous timing. “It transpired in conversation that Sarah [Hopkinson, co-director of Hopkinson Mossman] and Danae [Mossman], and Michael [Lett] and I were planning to include Cerith in our program at some point in the coming year … We decided to join forces,” Thomas explains. “It’s exciting to be working in this way with

another gallery – something which doesn’t happen often in Australasia – and it means that we can jointly present a much more comprehensive exhibition of Cerith’s work … The selection of works has been made in order to offer a strong, well-rounded introduction to Cerith’s practice. He made a beautiful show at White Cube’s Hong Kong space last year which I believe was very successful and I’m confident that although mostly new to the audience, the work will resonate with collectors here in Australasia. For those who have followed his work I think this exhibition will be of real interest as we have some terrific new works created especially for the show.”

May 5, 2020
Employing anything from rusty lids and souvenir spoons to taxidermy birds and vintage fabrics, Karla Dickens unearths underlying narratives of both the tender and the traumatic.
END_OF_DOCUMENT_TOKEN_TO_BE_REPLACED
https://artcollector.net.au/wp-content/uploads/2020/05/KD-Art-Collector-Magazine-Karla-Dickens-Daniel-Purvis-20200220_3896-copy.jpg 800 800 Camilla Wagstaff /wp-content/uploads/2019/02/Art-Collector-Magazine-Online.jpg Camilla Wagstaff2020-05-05 13:30:072020-05-05 13:30:07Karla Dickens: Lost and Found

Mavis Ngallametta: A Shift in Perspective
Scroll to top