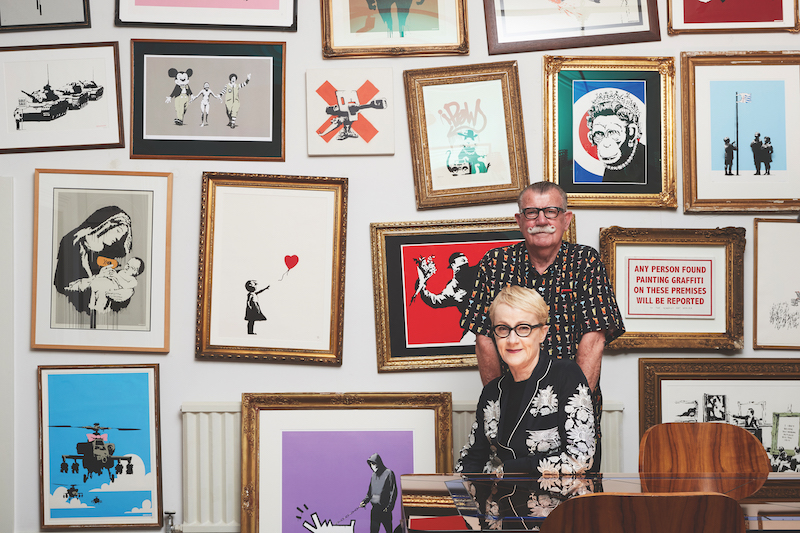 In 2014, Melbourne couple Andrew King and Sandra Powell sold their extensive collection of more than 90 Australian modernist paintings by the likes of Sidney Nolan, Albert Tucker, Brett Whiteley, Joy Hester and Clarice Beckett to focus on collecting contemporary street art. So enamoured are they by the Melbourne street art movement that they have even given their new artistic pursuits a novel name: the Sandrew collection.

Over the past decade, the pair has devoted themselves to the patronage of this populist art movement, even curating national and international exhibitions. Their St Kilda home is already an advertisement of their ambitions; the sprawling historic villa features wall-to-wall murals by local players such as Adnate, Ian Strange and stencil artist Vexta.

King and Powell’s enthusiasm for young Australian street artists such as Rone, Lush, Lister, Adnate, Reka and HA-HA is boundless and infectious. Not known in the mainstream art world, they are young heroes of the lively Melbourne street art scene.

“Despite living in Melbourne – one of the world’s urban art capitals – street and graffiti art only seriously came to my attention one propitious day in London around 10 years ago, when I casually happened upon two books,” remarks King. “One was by Banksy and one by Blek le Rat. I was immediately struck by the power of their social commentary, artistry and derring-do. Their work exemplifies the libertarianism and anti-authoritarianism that is at the heart of this genre of art – the antithesis of the snobbishness and arrogant elitism that stultifies much of the art establishment.”

“We started to seek out Australian street artists and, after meeting many of them, realised that they were undervalued for their contribution to the art world,” adds Powell. “Pretty much every street artist I have met has a quality about their personality that I really admire. They value public space and believe in giving their art to the city, outside the traditional art world. After many years of being underrated, street artists are now earning their rightful acclaim and I love being part of the street art family.”

King and Powell now own more than 2,000 works from the early 2000s to the current day by important Australian and international street artists. With some of their small pieces purchased for hundreds of dollars, large works can move into the tens of thousands. Among their remarkable collection are major works international art stars such as Banksy, Shepard Fairey, Barry McGee, Swoon and Ron English.

According to the duo, they have shifted from being passive spectators of art to active participants of a burgeoning and vital art scene. Their role goes beyond collecting, to facilitating and promoting artists – which can extend to entertaining, cooking for and housing young artists, many of whom have become good friends. While some artists might have initially been wary of the couple’s motives, there is now a great respect for their commitment.

So, what does this enterprising pair see as the future of street art in this country? “Thanks to the current mural and street art festival scene, many artists are now so busy they are knocking projects back or are booked a year or more ahead,” says Powell. “It is great to see artists making a good living from their art. That is the most important and satisfying aspect.”

King concludes: “It surely cannot be too much longer before the major institutions finally recognise that street art is the largest, most diverse art movement ever, and that it is woefully under-represented in their collections. And that the tsunami of the movement, and its legions of hip young followers, is unstoppable. What’s wrong with an art movement that’s popular?”