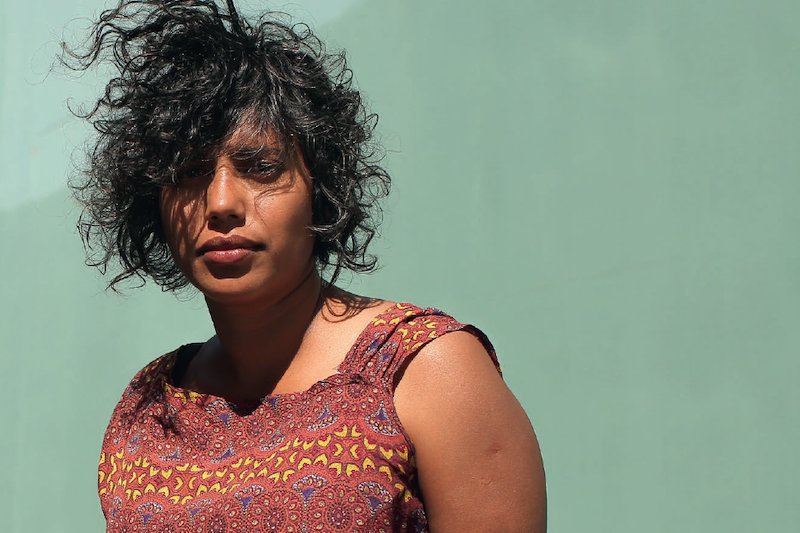 Artist Taloi Havini is currently on curators’ radars with her multi-video and sound installations.

No.1 Neighbour: Art in Papua New Guinea 1966-2016 at Queensland Art Gallery and Gallery of Modern Art (QAGOMA) was undoubtedly one of the best shows in a public institution in 2016, highlighting the rich creative culture of our geographical neighbours and proving a sleeper hit with audiences. One of the quiet standouts was artist Taloi Havini, who at the time of writing was en route back to her homeland. “2017 is going to be a very busy year so I’ve taken off now to Papua New Guinea to spend time on location in Bougainville filming and recording new work. I have been fortunate to receive a commission from the Art Gallery of New South Wales to complete my work titled Habitat.” This large screen multi-channel video and sound installation is for inclusion in The National: New Australian Art, which opens in March 2017, the first of three biennial surveys of contemporary Australian art in collaboration with Carriageworks and the Museum of Contemporary Art Australia.

Born in 1981 in Arawa, the largest town in the au-tonomous region of Bougainville, Havini identifies as a descendant of the Nanas clan. For the 8th Asia Pacific Triennial at QAGOMA Havini collaborated with photographer Stuart Miller on a striking body of photographs entitled Blood Generation, three of which were acquired, that documented the painful legacy of mining in Papua New Guinea. No.1 Neighbour featured the exquisite sculpture Beroana (shell money) – shown in Primavera 2015 – an installation of earthenware and steel wire that linked the tradi-tional with contemporary issues. QAGOMA curator Ruth McDougall says, “For No 1 Neighbour it was important to have work by a Bougainville artist that engaged with the recent history of that island as it is a history in which Australia and an independent PNG played defining roles. Taloi’s work’s Beroana engages with that history without being didactic. There is a light but very decisive touch.”

A graduate of Canberra School of Art the artist works across ceramics, photography, print media, video and mixed media installation and describes her own practice as centred “on the deconstruction of the politics of location,” which ultimately translates to beautifully poetic work. Havini is represented by Andrew Baker Art Dealer, and has work in the collections of the Queensland Gallery of Modern Art, the National Gallery of Victoria and Australian National University.

March 31, 2022
Blood sculptures that melt in the warm air on opening night, chewing gum soldiers that visitors tread across the gallery floor and jaffas that melt into hair gel are all exchanges of substances that are part of the process in Tim Silver’s artworks. To Edward Colless they form a poetic theme of sickening, contaminating love like the kiss of a vampire.
END_OF_DOCUMENT_TOKEN_TO_BE_REPLACED
https://artcollector.net.au/wp-content/uploads/2022/03/Tim_Silver-1_1-800q.jpg 531 531 AdrianaBorsey https://artcollector.net.au/wp-content/uploads/2021/11/Art-Collector-logos-transparency-WHITE-1080x1080px-2.png AdrianaBorsey2022-03-31 15:44:352022-03-31 15:44:35Artist Profile: Tim Silver

March 31, 2022
Makinti Napanangka, now over 70 years old, paints on the ground in the open air hunched over her canvas, her brushstrokes confident and instinctive. The efforts of her day’s work are eagerly sought by institutions and collectors all over the world. Jennifer Isaacs visited this prominent desert painter’s remote home base at Kintore, to watch her work.
END_OF_DOCUMENT_TOKEN_TO_BE_REPLACED
https://artcollector.net.au/wp-content/uploads/2022/03/Makinti2-800-sq.jpg 545 545 AdrianaBorsey https://artcollector.net.au/wp-content/uploads/2021/11/Art-Collector-logos-transparency-WHITE-1080x1080px-2.png AdrianaBorsey2022-03-31 15:25:222022-03-31 15:25:22Artist Profile: Makinti Napanangka

The Collector’s Space
Scroll to top