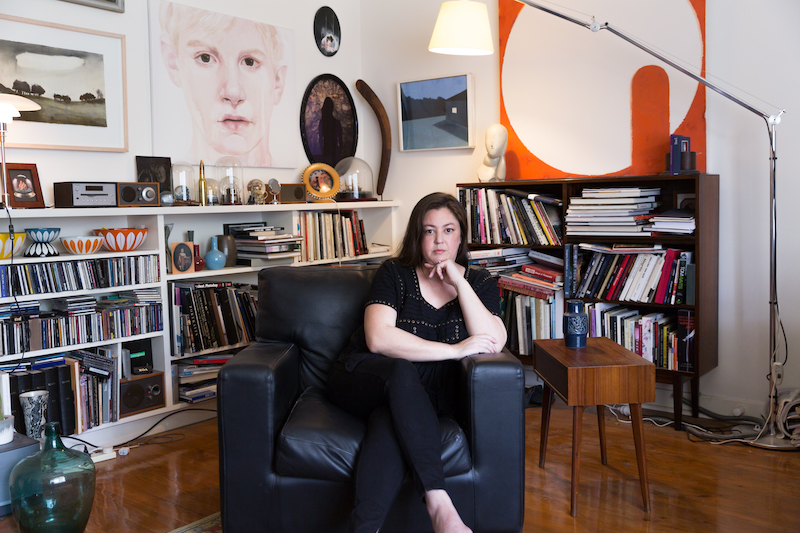 Andrew Purvis explores Deborah Paauwe’s photographic studies of girlhood and womanhood and the blurred lines between the two.

Is it because her young girls in beauty contest outfits mirror the universal female rehearsal for adult life? Or that her images are all of us, and yet remain distant, anonymous figures?

Deborah Paauwe’s arresting photographs possess a curious, sometimes troubling quality of uncertainty and ambivalence. Throughout her almost 20-year practice, Paauwe has focused on socially- constructed ideas of female identity and the slippery ambiguity that exists at the threshold of adolescence, between what it means to be a girl and what it means to be a woman. The lucid simplicity of Paauwe’s highly stylised aesthetic belies a depth of haunting, mysterious complexity. Her images are colourful, captivating and seductive; but they also possess a lingering sense of poignancy.

Based in Adelaide, Paauwe has been the recipient of the prestigious Anne & Gordon Samstag International Visual Arts Scholarship and has completed a MA in Fine Art at the Chelsea College of Art and Design, London. Paauwe’s theatrical compositions have prompted comparisons to Cindy Sherman, for their uncanny, filmic qualities and concern with feminine identity. Her work has been exhibited widely, both nationally and internationally, and is represented in many significant collections, including the National Gallery of Australia, National Gallery of Victoria, Art Gallery of South Australia, Art Gallery of Western Australia and the National Portrait Gallery in Canberra.

The title of Paauwe’s latest series, Summer of ’83, showing at Greenaway Art Gallery | GAGPROJECTS in Adelaide, would seem to suggest a nostalgic, affectionate reminiscence of vanished childhood. But the images themselves hint at a more complicated motive. Girls and young woman are dressed in pastel frocks and sequined leotards; this is a world of junior acrobatics, beauty pageants and high school proms. There is a distinct sense of American splendour in these costumes; in the red, white and blue leotards. Paauwe, who was born in Pennsylvania in 1972, evokes the superficial glamour and styling of fashion photography, with its concentration on clothing and hair.

These figures are photographed against stark white backgrounds framed with almost forensic clarity. No detail, it seems, is obscured or indistinct; the light winks on each individual sequin and we can see each manicured fingernail. The images are beautiful, possessing an opulence of colour. And yet, there remains something opaque and enigmatic about these photographs. The most pertinent information is denied to us.

In Paauwe’s works, the models’ faces are never glimpsed; they turn away from us, or conceal their identities behind mirrors and fans. In Summer of ’83, the figures huddle together, arms interlocked and heads bowed, so that a cascade of hair entirely conceals their downcast faces. Unable to connect with the subjects’ eyes or discern their individuality, the viewer is denied access; these girls and young women are unknowable. They exist somewhere else, somewhere remote, and are interested only in their insular, private lives.

Rendered anonymous, it becomes difficult to distinguish ages, to make out the difference between girls and young women. Rather than evoking nostalgia, these images intertwine the juvenile and adult world, suggesting a reciprocal exchange across the transitional state of adolescence. As children, we rehearse for adult life, costuming and performing the roles we imagine we shall one day play; conversely, childhood memories leave an indelible impact on adult life.

The absence of immediately recognisable visual cues, like eyes and faces, has the additional effect of heightening the scrutiny applied to the figures’ body language. The figures’ poses are delicate, unnaturally so, conveying an air of melancholic stillness, yet the girls’ hair is wild and mobile; tresses caught in mid-toss. The girls huddle together, touching and holding each other. Arms are folded protectively across small, vulnerable bodies and hands hover gently, though the gesture seems to fall somewhere between affection and restraint. These works explore the physicality of juvenile and adolescent female sociality, the way in which friendships are used to test and transition from childhood to womanhood.

The averted gaze of the subject imbues these images with a slight voyeuristic quality, the sense that, like the voyeur, we are only able to peer in from the outside. In one image, two girls lean in, whispering to each other. The recipient of the furtive communication holds her hands frozen in mid-air, as though in shock. Here, as in so much of Paauwe’s oeuvre, there appears to be an entire secret world, hovering within view, but perpetually out of reach.

Deborah Paauwe was just 20 years old when Paul Greenaway first met her in 1992. The artist graduated art school that same year and debuted at his gallery. Almost three decades later, Paauwe has garnered a collector base that is as strong as it is diverse, despite the preconception that the artist would mainly attract young female buyers because of her chosen subject matter. There is a steady demand for her work which, according to the director, is tightly held and rarely appears on the secondary market. – Emma O’Neill

It was at one of Paul Greenaway’s many exhibitions with Deborah Paauwe that led to Gael Newton’s encounter with her works in the 1990s. “It was her very early miniature scale bright colour photographs of Chinese slippers—it felt like looking through a window in a dolls house and reminded me of the cosseted intrigues in Zhang Yimou’s film Raise The Red Lantern,” says the former senior curator of photography at the National Gallery of Australia.

Since the first discovery, Newton notes the changes she has seen in Paauwe’s work. “The colour palette has become more sophisticated and the staging more complex. The scale has also changed dramatically over the years. The frisson and sense of hidden stories even feminist threads of the early work, remains.”

“Paauwe is from the remarkable second wave of post-modern women photomedia artists in the 1990s, after the 1980s generation—Anne Ferran, Tracey Moffatt and the like—became the first significant photomedia artists to take an equal place with the older art forms in a contemporary art scene. And indeed, the first cohort of women practitioners in the medium. They revolutionised the art scene. These artists navigated photographic artifice and tableaux; maybe it’s my 1970s bias, but there are social threads behind the glamour and polish of the work. The issues of dressing up still has resonance for women of my generation.”

Of particular relevance to the latest suite of photographs entitled Summer of ’83, Newton says: “Paauwe confounds with her seemingly nostalgic embrace of female childhood fantasies of dress-ups, but at the same time she dislocates the image slightly. Her young models’ fleshy bodies are so palpable in contrast with the fantasies of the costumes.” This, according to Newton, makes the viewer ask them- selves, “what’s wrong with this picture?”. – Emma O’Neill