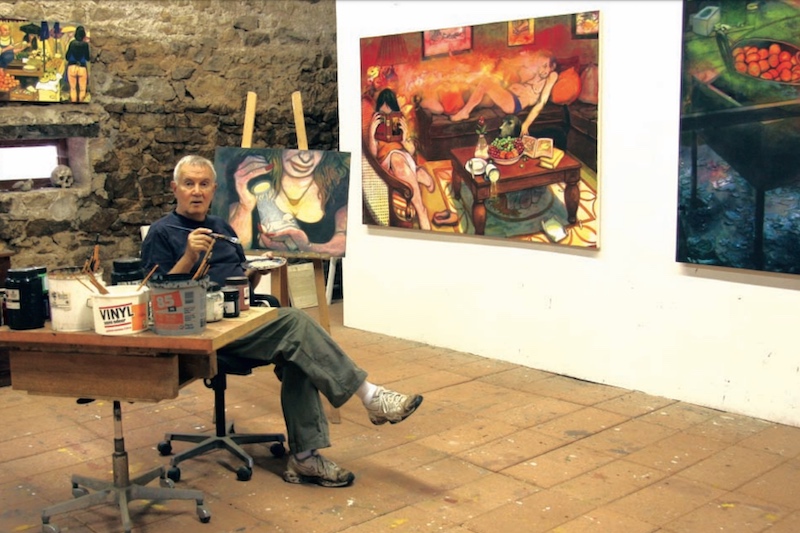 Fred Cress: Figured it Out

Fred Cress was one of the most successful painters of his generation, by all accounts a leading light in new painterly abstraction, when to the dismay of his high profile champions he turned his back on all of that and took up figuration.

When the 23-year-old Fred Cress arrived in Melbourne in 1962 as an assisted migrant from the UK and took up his first posting as an art teacher in Wangaratta, there was nothing to hint at his future spectacular success.

He had been born in 1938 into a British military enclave in Poona, in India, in the final years of British imperial rule. The family left for England, shortly after Indian independence, and settled in Birmingham, where Fred completed his schooling which was accompanied by poor health and was characterised by undistinguished academic results. He gravitated to the Birmingham College of Art and developed a professional competence in tennis and a passion for flashy fast cars.

In Australia, news of his success could hardly be exaggerated. Within 10 years he moved from being a pommy with attitude and a chip on his shoulder, one who got booted out of a teaching job and had difficulty in finding a gallery that would exhibit his work, to being one of the most successful painters of his generation. Patrick McCaughey, art critic, academic, gallery director and taste guru, championed Fred Cress as a leading light in new painterly abstraction. The wreath of glory came with his inclusion in what became known as the Ten Little Australians show which toured Europe in 1974/75 mounted by the newly established Visual Arts Board, selected by McCaughey, curated by Ron Radford, and which was personally endorsed by Prime Minister Gough Whitlam. The ABC produced a series of television capsules to accompany the show, the one on Fred Cress showed the artist at the wheel of his recently acquired silver Bentley S series saloon car deep in discussion with his smart South Yarra art dealer, David Chapman. No longer was it a case of “Gad, sir, when I was in Poona”, but rather, “when I was last in New York chatting to Clem Greenberg…”

The paradox of Fred Cress’s career was that within 10 years he had turned his back on all of this and to the dismay of his high profile backers turned to a figurative mode of work. Cress himself in his account of his path back to figuration traces a much more uncertain journey and one which was born of a lengthy process of struggle and self-doubt. He mentioned in an interview with me in 2001: “When I went to New York in 1974 and met with Clement Greenberg, Kenneth Noland, Jules Olitski, Helen Frankenthaler, Larry Poons and company, and talked to them, and this I have never mentioned before, I came away basically disappointed, not uplifted, with the people whom I had met and the things which I had seen and heard. I expected them to be super confident and super strong as people, I expected them to be clear about their work and not fragile about how it was approached by others. But they seemed to only want applause and were very sensitive to criticism. They were not robust … When I came back from my two months in New York I was a worried man and not the confident artist which I was made out to be. The conclusion I had come to was that the problem lay with drawing – the fact that these artists did not draw worried me. For me, drawing was important because that was where touch lay, where intimacy lay, where your total individuality lay – that was the way you could tell who was an artist and who was not.”

By 1982 a personal crisis in his life, which eventually culminated in the collapse of his long standing marriage, coincided with a two month stay in India, as Australia’s representative to the Fifth Indian Triennial in New Delhi, where he reexamined much of his thinking about art. “When I came back from India I came back with narrative in my mind and felt that Western painting had lost a most important thing when it could not tell stories, because we were told not to tell stories as this was not in the true interests of painting and not in our best interests as artists. I also came back wanting to make painting much more enjoyable again, filled with colour and strong tone and if you are using narrative you give yourself a lot to draw because you drag into your orbit many more shapes and situations. It doesn’t work just to tell the same story again and again. … Because I was still an abstract painter, I first tried to put it all into abstract painting and it was not until 1988 that the pressure for figuration became too great, so in 1988, at the age of fifty, artistically I became totally myself.” Cress likes to draw a parallel with Goya, and the myth of the divided genius, who in his early life was the fashionable painter who nostalgically clung to the frivolity of the Baroque, only to be reborn, when aged about fifty, as the innovator and visionary. This dark twin engaged with the romantic imagination, denounced the horrors of war, the hypocrisy of the church and the fear and superstitions of the masses, one who towards the end of his life painted mystical black paintings and who died in exile in France.

In 1988 Cress was awarded the Archibald Prize for portraiture as well as the People’s choice award; in 1995 he was the subject of a survey exhibition at the Art Gallery of New South Wales, and up to the present he has enjoyed high profile success with a plethora of highly successful solo exhibitions of his figurative work.

Fred Cress is an artist who likes to observe society from behind the scenes, as a passionate outsider commenting on the follies of humanity and the passing parade. This voyeuristic aspect, laced with sinister enjoyment, sets up a discourse between the artist and his subject and we the audience are invited to adopt partisan positions. The situations and the realities which he describes are known to all of us and the artist adopts an ethical stance where on one hand he appears to condemn the foibles, greed and stupidity of the situations which he describes, on the other, the irony and sensuous eroticism which he introduces into his scenes suggests that he secretly enjoys the experience.

Boyd, Counihan and Sibley have all made significant ethical statements in their work. In Cress’s case, irony is as much a strategy as are compassion or condemnation. It is as if Goya’s famous apocalyptic dog is now taking a stroll in the Australian suburbs and relates a tale of what it sees with innocent amazement. In part the power of the imagery must lie in the fact that the tale seems distantly familiar to members of the artist’s audience.

Fred Cress is a maverick figure on the Australian art scene who, from his early abstract paintings through to his more recent figurative work focussing on the rituals of eating and social situations involving lust, hate, envy and greed, has held a high public profile. His most recent paintings from 2006, including New Dawn, Bad Company and Poolside relate specifically to that recent outrageous incident on the P&O cruise ship, but also comment more broadly on male behaviour.

Today he lives for half of the year in Sydney and the rest of the time in his rural retreat in Burgundy, near Cluny, in France.

The Best Works and Where to Find Them
Although Fred Cress has worked in many mediums to produce his paintings, works on paper and prints, they generally divide between the abstracts made before the mid-eighties and the subsequent figurative works. He is widely represented in Australian and international public collections and has a very professional and frequently updated website: http://fredcress.net/fredcress.htm with work available from the Australian Galleries in Sydney and Melbourne and BMG Art in Adelaide.

Prices at Auction
Fred Cress’s works do not appear in great numbers at auction, rarely more than about a dozen a year. The highest achieved price has been for a large acrylic canvas, Strangers before, 1991, 167 x 198 cm, at Christies (Sydney Apr 2004) which achieved $23,900, while the second highest price was achieved for a slightly smaller canvas, Sunday, 1985, at Sotheby’s for $10,200 (Melbourne Apr 2002). Early oils from the mid-sixties have sold for up to $4,000, while watercolours have sold for under $1,000 and prints for under $500.

How to start collecting
Fred Cress has always been a prolific artist who has exhibited frequently since his first solo exhibition in 1965. Generally his prints, which range in price between $400 and $3,300, are widely available through his dealers. While works on the secondary market seem to be cheaper than through the gallery, the choice is rather limited as most collectors seem to hang on to their Cress paintings. He is also an artist who has generally improved in his more recent work. His paintings at the Australian Galleries in Sydney later this year will range in price between $90,000 and $7,700. Gavin Fry’s monograph on the artist, Fred Cress: Paintings 1967-2000, published by The Beagle Press in 2001 and Alan Krell’s earlier monograph, Fred Cress: Stages, published by Wild and Woolley 1989 are both still in print and form an excellent introduction to the artist’s work.

Recent works by Fred Cress will be exhibited at Australian Galleries, Sydney from 14 November 2006 to 2 December, 2006.