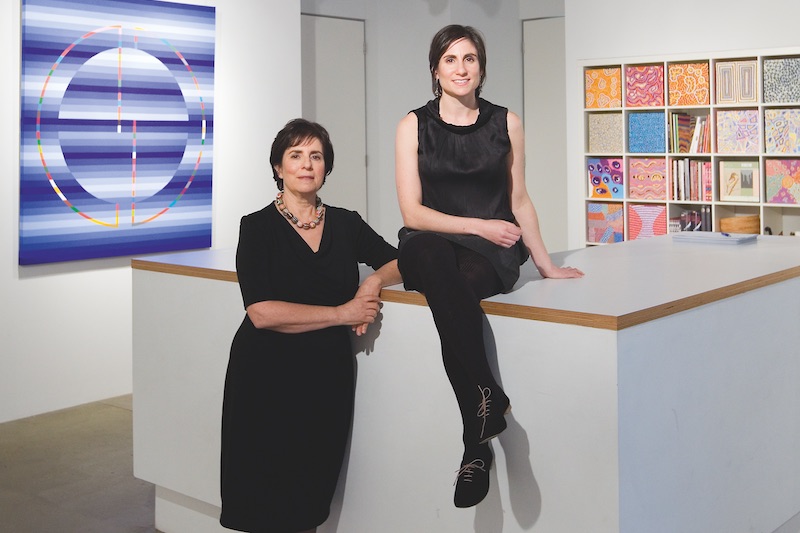 Helen McKenzie talks to veteran art dealer Diane Mossenson about the changes she has witnessed in her 21 years in the trade and what she sees for the future of the Aboriginal art market.

Has the Indigenous art industry changed significantly since 1993 when you founded the gallery?
It has changed enormously. When we started there were 20 art centres, now there are well over 100. When we started we could deal with pretty much all the art centres that existed. Now the reality is that you can’t and also choose not to. You are subject to the vagaries of the different art centre coordinators that come through; they have the capacity to change relationships irrespective of what you might want to do. Sometimes you are sent unsaleable works and you wonder what they are thinking and then you are deemed a bit of a failure when they don’t sell. Other centres you can work with more closely, construct projects, choose the work for a show, and that is a more rewarding and satisfying way to go. [The Buku-Larrnggay Mulka Centre at] Yirrkala, for example, continues to produce wonderful and exciting works in all forms and media and new and exciting projects – an exemplary art centre in how they have gone about their art practice. They have had a consistency in art coordinators with great vision.

In some instances would it be preferable to work one- on-one with the artists?
For us working closely with the artists has been one of the great pleasures. Unlike other galleries that work in Indigenous art, there are artists who we have worked with on a one-to-one basis. We set up the equivalent of an art centre in Derby and worked with a group of senior artists and we are working strongly with a few artists in the Central Desert area as well. Shane Pickett had his studio within our gallery for 10 years. We handled, catalogued, processed and photographed all his work. It was a pleasure and an absolute privilege. Some of the elderly guys from the Kimberley were unique human beings the like of which this earth will never see again. We had that link and association with them and got a sense of what it was like to have been a well-informed traditional Indigenous person who knew and lived the country.

What are your thoughts on the future of arrangements for the sale of Indigenous art?
In some ways it’s been an interesting political shift with all the talk about the code of conduct. I think that some artists would like to be independent practitioner artists. One continually looks now at the divergent standards between Indigenous and non-Indigenous art practices and things like the code of conduct continue to reinforce it. You wonder if this is the best thing for Indigenous artists, going in to the future, to be marginalised and would it not be better for them to be more included into mainstream art practice. It is their heritage that makes their artwork quite special but should they keep being lumped into a special category for handling, versus the rest of Australian artists? Some artists are saying they don’t want to be separated off into another category [preferring to say that] their Indigenous background just helps to inform what they produce.

There is a great deal of Aboriginal art on the market, how do you help collectors new to the Indigenous art make informed decisions?
The artists we represent are frequently chosen as finalists, and on occasion winners, in Australia’s major art prizes. Last year our small group of artists had over 50 artworks selected for exhibition in art prizes, such as the National Aboriginal & Torres Strait Islander Art Award, Western Australian Indigenous Art Award, Wynne Prize, Sulman Prize, Geelong Art Prize, Waterhouse Natural History Prize and the Outback Art Award. Our gallery regularly sells works to many of Australia’s major institutions and collectors, last year we sold over 25 pieces to institutions.