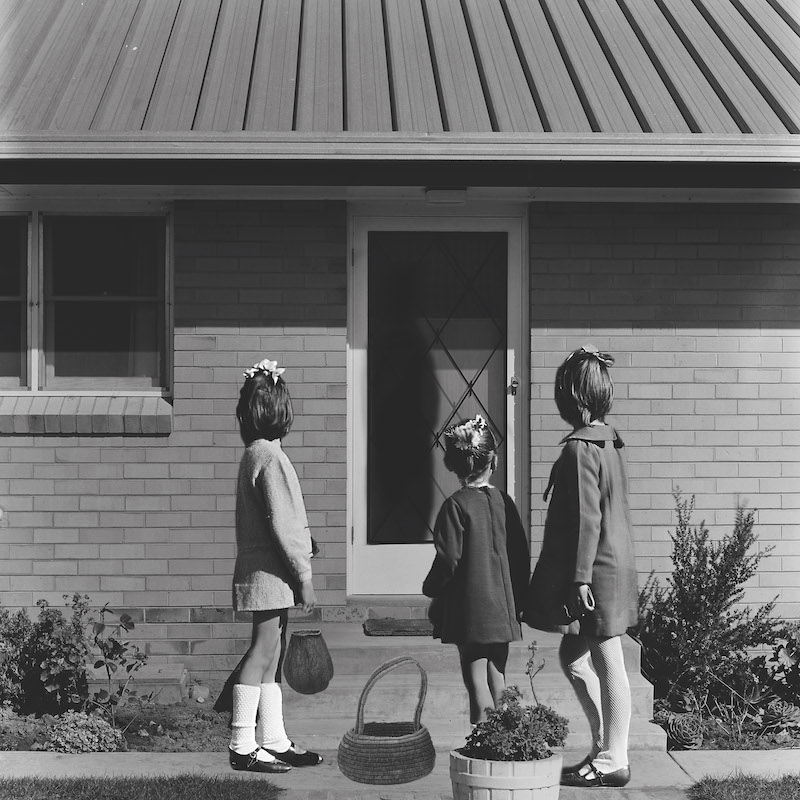 Hayley Millar-Baker’s visually arresting mise en scenes are quick to draw us in, revealing a coexistence of different times and places – alternative stories and histories told through each feather, every branch.

It’s easy to see why critics and collectors alike have recently been captivated by Hayley Millar-Baker’s black-and-white photo assemblages. Her visually arresting mise en scenes are quick to draw us in, revealing a coexistence of different times and places – alternative stories and histories told through each feather, every branch.

Millar-Baker is a Gunditjmara woman from Victoria. To create her digital photo assemblages, she draws from a growing archive of photographs taken on ancestral Country and the Country where she grew up. Cut-outs from her photographs, each monumental in the stories they hold, are meticulously collected and digitally layered.

Millar-Baker exhibited her Toongkateeyt (Tomorrow) series as part of the TARNANTHI: Festival of Contemporary Aboriginal and Torres Strait Islander Art in October 2017. Digitally constructing imagined landscapes from hundreds of individual layers of photo- graphs, the works were embedded with stories of First Nations intergenerational experience and adaptation. The exhibition led to significant critical and curatorial attention for the artist, who swiftly picked up representation at Vivien Anderson Gallery in Melbourne.

Completing her Masters of Fine Art at RMIT at the end of 2017, in the past two years, Millar-Baker has been a finalist in significant national prizes including the Churchie National Emerging Art Prize, Incinerator Art Award and the 65th Blake Prize. Her work was shown in Artbank’s In a World of Wounds, curated by Talia Smith, and UTS Gallery’s Void, curated by Emily McDaniel. Millar-Baker was also selected for the 2018 Primavera at the Museum of Contemporary Art, in which curator Megan Robson acknowledged the power of her work in making absent histories visible.

As her career continues to build momentum, 2019 will see Millar-Baker create new works in her Cook Book series and continue to develop her installation practice for Those Monuments Don’t Know Us at Bundoora Homestead Art Centre. Her work will focus deeply on the life of her Grandmother for a major exhibition at the Heide Museum of Modern Art, Apocalyptic Horse, in which she will exhibit alongside Australian greats James Gleeson, Patricia Piccinini and Albert Tucker. Millar-Baker’s voice is strong and one to follow in our urgent discussions of identity, and growing understanding of the strength, resilience and complexities of Aboriginal Australia.