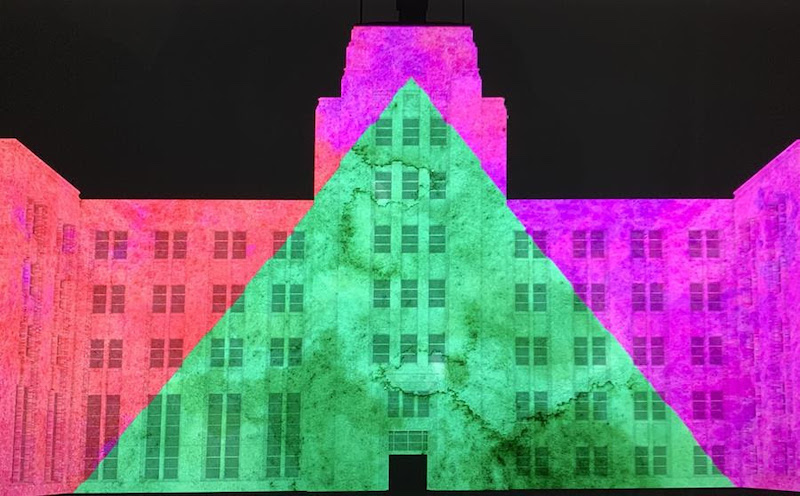 Helen Eager to shine in Vivid 2021

Vivid 2021 has commissioned Australia’s leading abstractionist, Helen Eager, to create a centrepiece light-work for this year’s event, which will run 6 to 28 August 2021. Eager’s latest work, New York Sunday, will be projected nightly on the six-storey-high exterior of the Museum of Contemporary Art Australia, accompanied by an electronic music accompaniment composed by Paul Mac, and digitised by Rico and Julian Reinhold of creative studio H0RSE.

Eager’s bold segments of colour evolve into new combinations, constantly in a stasis of reordering. Eager’s practice of deconstruction is evident as the projection of abstract forms mingle within the buildings structural parameters that act as a canvas. Eager’s 1988 Greene Street residency in New York, proved pivotal for her career, where she switched from representational to abstract art. This year’s light installation will showcase Eager’s art from that time with an eight-minute-long visual journey tracking the artists history which is repeated each night. “The sheer scale has been thrilling. And turning the huge MCA building into a canvas has been exhilarating” Eager shares.

Eager has held 30 solo exhibitions and has been part of 130 group exhibitions. Her work is widely sought in every Australian Institution and Museum, and in private Australian collections. Eager has also had a series of noteworthy wall commissions, Tango, currently on view at the Museum of Contemporary Art Australia. She was part of Know My Name at the NGA in 2020-21. Her catalogue Raisonne, will also be published later in 2021.