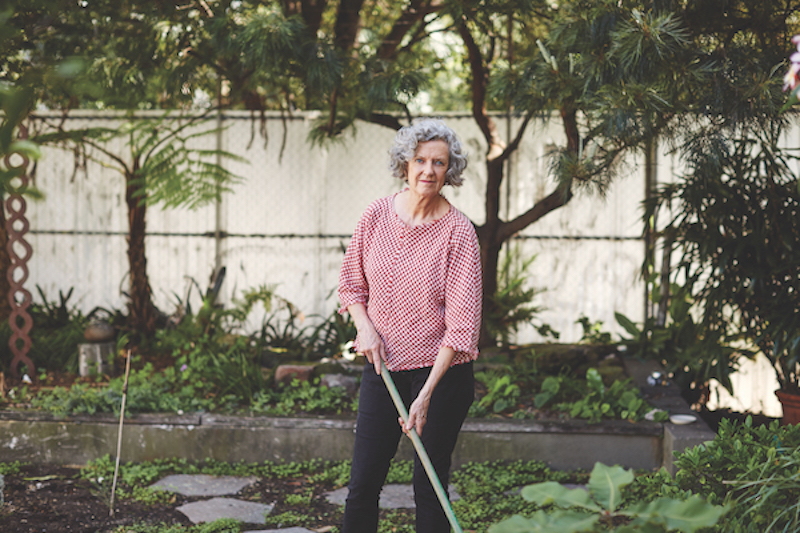 Over the past four decades, Australian artist Helen Eager has remained devoted to the pleasure principles of abstraction.

Starting out as an interior landscape and still life painter, Helen Eager’s preoccupation with abstraction began in the 1980s. Since that time, the artist has used discernible geometric forms and suggestive patterning — often in the form of geometric triangles — to blaze a trail during a period of male dominance in the art world. After graduating from the South Australian School of Art in 1975 and exhibiting at Watters Gallery in Sydney in 1977, Eager — through the assistance of the Visual Arts Board — travelled throughout Europe, England and America. She recalls participating in print workshops, visiting public galleries and finally witnessing in the flesh, Modern masterpieces by French painters, Henri Matisse and Pierre Bonnard, who she sites as key influences. These critical encounters would set alight her passion for tone, colour, space, sound, light and dazzling pattering — factors that are central concerns in her current practice.

The second formative experience arrived while studying her Masters at the then College of Fine Arts in Sydney. Eager undertook a four-month residency at the Australia Council for the Arts’ Greene Street Studio in New York’s Soho on the Lower East Side. The opportunity allowed her to participate in the bourgeoning New York creative scene. Through dedicated time in the studio, she would push the boundaries of her own work, allowing her interest in abstraction and working at scale to ring out. She describes, “When I arrived in New York, there were abstractionists. There was a sense of boldness. New York was a place where you could do whatever you wanted to do. I’ve never looked back, really.”

The first drawing she completed in the studio measured three by two metres, the largest of her career at that point. In forthcoming works, she would focus less on representing objects; opting to paint analytically and deconstruct the subjects of her still lifes — chairs, tables and the like — into their constituent forms, textures and colours. In this way, her practice started to resemble more and more the principles of 20th-century abstraction, which insisted that painting should be nothing more than the sum of its own materials. Reflecting on this period, Eager notes finished artworks can never truly be closed off from memory, autobiography and the vexed history of painting. Painting is a response, and this is the case for Eager.

Eager has since honed her interest in non-objective abstraction. Each painting begins as an experiment on paper of varying colours, forms and pattern combinations — ideas that she will eventually synthesise into her painting. While Eager is concerned with geometry and the precision of abstraction —patiently applying thin layers of colour to build up the final colour — her process equally involves her intuitive painterly instincts. “I usually spend as much time drawing as I paint,” she says. “Occasionally the completed works might not look anything like the drawings. The forms could look the same, but the texture and their application might not, but that’s the process.”

This was the case when Eager created Tango (2012), her largest site-specific commission to date, at the Museum of Contemporary Art in Sydney. Inspired by Latin dance, Eager wanted to create a work that encapsulated the tension and energy of the dance form. Painted directly onto the wall, Tango featured a series of slightly varying marmalade-coloured triangles swirling juicily together in different states of union and separation. These calculated formations were arranged to activate the negative space between triangles, emphasising both the forms and the negative space surrounding them equally. To view the work was akin to depressing the sustaining pedal of a piano — it offered audience members a moment of vibration and pleasure from the subtle contrasts and intuitive innocence of the triangles. The composition calls to mind the Dutch term, houding. Used to describe Dutch Golden Age painting, the term — which has no real English equivalent — refers to the harmonious interlocking of colour, perspective and tone in painting to create a successful sense of depth, illusion and atmosphere. The calibration of these painterly elements is considered so integral to the whole, that the dislocation of any of these components would make the entire composition fall apart.

Painted some 22 years following her Greene Street residency, Tango is evidence of Eager’s commitment to arguing for the moral integrity of colour, form and its associated pleasures.

A celebration of Eager’s practice manifests this year in the form of two exhibitions devised by her gallery, Utopia Art Sydney, offering audiences a deeper comprehension of her oeuvre. The first will be a series of new works titled Duets. A continuation of the ideas in her 2018 exhibition, Satellites, these abstract works comprise two in conversational trapezoidal forms constructed from great bolts of eye-popping colour.

When asked about the timing of these exhibitions, Eager gives thanks to those who have supported her. “I’ve had a lucky time as an artist. I’m motivated to be an artist; I’m not really motivated to do any other line of work. Thankfully, I’ve had good galleries, which have enabled me to do what I wanted to do and move forward with what I wanted to.” And with that, Eager is positive that the next chapter will be her most formative and rewarding yet.

“Helen Eager first exhibited with Utopia Art Sydney in an informal way in 2005 with her solo exhibition at The Depot Gallery in Waterloo. This show featured bold crayon drawings on paper that were grouped together in large blocks, pinned to the wall. They made a big impression. Utopia Art Sydney helped with the installation (including a few sales during the course of the show) and it wasn’t long before Helen became a part of our gallery. We have represented her ever since.

“Helen is a very easy artist to represent, very confident with her work, self-motivated, organised and professional. Her work evolves naturally. She works in a calm and orderly pattern that always begins with lots of drawing [with] coloured pencil, neon pens, watercolours, crayons and pastels… and then she starts painting! At this point her vision for her paintings is fully formed, and almost immediately her studio begins to transform, as bigger and bigger canvasses begin to populate the space. It’s always an exciting time.

“The paintings start off very spare and gradually, layer by layer, she creates magical colour combinations that bring her geometric forms to life. It’s always a pleasure to visit Helen’s studio because there is always something happening: whether it be little books where every page is a new variation on a theme, a wall full of works on paper, or a studio full of canvasses jostling for attention.”

“In 2011 Helen Eager was awarded the Museum of Contemporary Art’s inaugural Circular Quay Foyer Wall Commission, a site-specific painting on a commanding, 15 by seven-metre wall flanking the staircase of the museum’s entrance hall. I was the head of artistic programs at the time. The commission was an important, high-profile proposition, and Helen’s work Tango, completed in early 2012, was a perfect response – a great, welcoming artwork that was joyous, celebratory and dynamic. Her vibrant orange triangles seemed to dance effortlessly down the staircase, Tango could be seen from the ferries and the train station some 400 metres away.

“Helen’s paintings, drawings and prints are uplifting, resolute and light-filled, like a beautiful view. She has an extraordinary capacity to integrate structure with a rare ethereality. Her pared-back compositions, informed by many years of practice, are rigorous and poetic. Her approach explores the effects of light, space and material, and fits within the context of geometric abstraction and minimalism, aligned with artists such as Sol LeWitt and Bridget Riley.”

March 31, 2022
Blood sculptures that melt in the warm air on opening night, chewing gum soldiers that visitors tread across the gallery floor and jaffas that melt into hair gel are all exchanges of substances that are part of the process in Tim Silver’s artworks. To Edward Colless they form a poetic theme of sickening, contaminating love like the kiss of a vampire.
END_OF_DOCUMENT_TOKEN_TO_BE_REPLACED
https://artcollector.net.au/wp-content/uploads/2022/03/Tim_Silver-1_1-800q.jpg 531 531 AdrianaBorsey https://artcollector.net.au/wp-content/uploads/2021/11/Art-Collector-logos-transparency-WHITE-1080x1080px-2.png AdrianaBorsey2022-03-31 15:44:352022-03-31 15:44:35Artist Profile: Tim Silver

March 31, 2022
Makinti Napanangka, now over 70 years old, paints on the ground in the open air hunched over her canvas, her brushstrokes confident and instinctive. The efforts of her day’s work are eagerly sought by institutions and collectors all over the world. Jennifer Isaacs visited this prominent desert painter’s remote home base at Kintore, to watch her work.
END_OF_DOCUMENT_TOKEN_TO_BE_REPLACED
https://artcollector.net.au/wp-content/uploads/2022/03/Makinti2-800-sq.jpg 545 545 AdrianaBorsey https://artcollector.net.au/wp-content/uploads/2021/11/Art-Collector-logos-transparency-WHITE-1080x1080px-2.png AdrianaBorsey2022-03-31 15:25:222022-03-31 15:25:22Artist Profile: Makinti Napanangka

Michael Cook: Keeping up with the Joneses
Scroll to top