IN BED WITH… Rhianna Walcott

We curl up with Rhianna Walcott, associate director at Rozelle’s Artereal Gallery and stalwart supporter of the arts in Sydney and beyond, to find out how she’s been keeping herself busy in isolation. 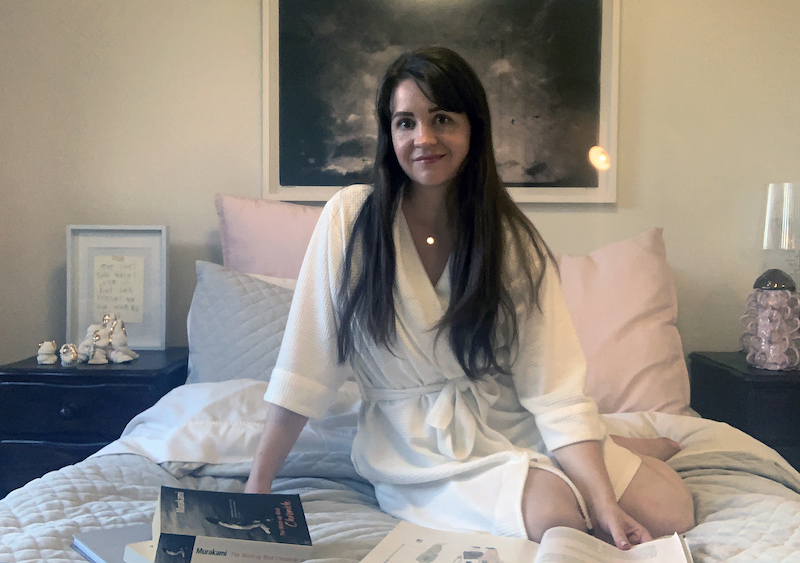 What you are reading?

I’ve been doing so much reading – escaping into a book right now is keeping me sane! At the moment I’m in the middle of  The Wind-Up Bird Chronicles by Murakami and Three Women by Lisa Taddeo. I’ve just finished Stasiland by Anna Funder, which I couldn’t put down.

I’ve also been reading a lot of long form essays from magazines like The New Yorker and Vanity Fair. Something I normally feel like I never have enough time for! The New Yorker just featured a really interesting essay on artist Jordan Wolfson and there was a great but slightly bizarre piece in Vanity Fair on a series of fake artworks loaned to Prince Charles by a hustler tycoon.

What you are watching?

I just rewatched Nocturnal Animals. I love Tom Ford’s movies. And I have been hanging out each week for the new season of Killing Eve on ABC. I’ve also spent a lot of time binge watching European shows like Twice Upon A Time and Dark – mainly because it’s the closest I can get to travelling overseas right now!

What you are listening to?

Current favourites are The ABC’s new podcast The Eleventh on the Whitlam dismissal and Brene Brown’s new podcast. And each week I obsessively listen to The High Low, Chat 10, Looks 3 and The Week in Art, which is produced by The Art Newspaper.

What social are you’re following?

I’m trying to disconnect from social media a little more at the moment. But I am a big fan of Jerry Gagosian when in need of a laugh and I also like to follow international galleries like Gagosian on ITV. Watching their short films on the artists they represent is almost like getting to visit a gallery. Almost! Not quite.

What else are you doing?

When I feel like an art fix, I’ve been checking out the Biennale of Sydney online. Aside from that I’ve been doing a lot of live streamed yoga, way too much baking and have been forcing myself to go for a run each day to work off all the cakes I’ve been baking. I’ve also been catching up with friends by playing trivial pursuit on Zoom, with a bottle of wine.

Image: Ron and George Adams in bed with Art Collector in Sydney.

VIDEO: At home with… Erin Lawlor
Scroll to top