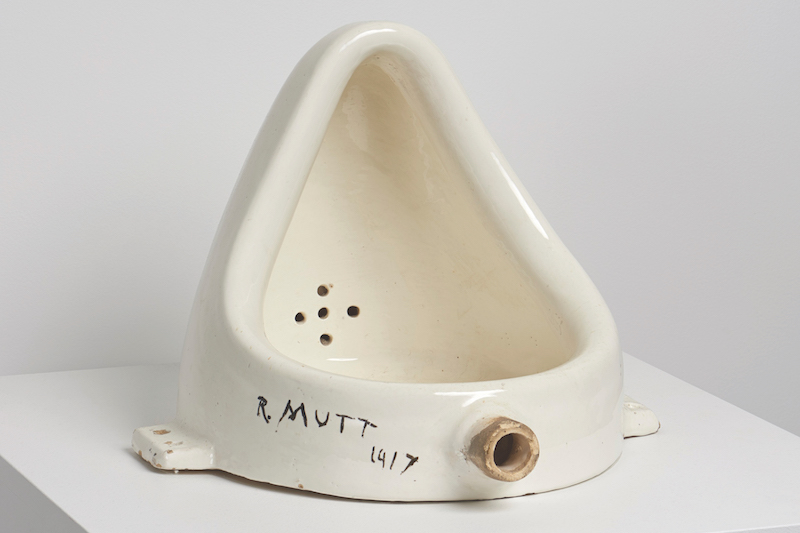 Marcel Duchamp’s Fountain is an exemplary object in the Dada inventory and, 100 years on, is still a perplexing and contentious work of art. The anti-art negativism of the Dada movement sprouted like poison mushrooms from the slaughterhouse compost of WWI, and Fountain especially poured an acidic venom over the conventions and protocols of bourgeois artistic value at the time. Conspiracy theories as well as arcane deconstructionist exercises continue to flourish around this factory bought white ceramic urinal, turned on its side and signed “R. Mutt” crudely on its flank.

When it was entered in the Society of Independent Artists’ inaugural exhibition in New York in April 1917, Duchamp didn’t claim authorship. It was, he wrote shortly afterward, a work by Richard Mutt sent to the exhibition by an unnamed woman friend of his; a phrase that, taken literally, has generated vociferous claims that the true author was one (or a combination) of three women artists whom Duchamp knew at the time. Or possibly even a fourth: Duchamp’s own transvestite alter ego, Rrose Selavy.

One can imagine Duchamp smiling at this disputed attribution of a work designed and manufactured by anonymous hands and that, during the exhibition, was hidden from view (due to its offensiveness and dubiousness as a work of art). It was an invisible masterpiece, especially as the original work was promptly lost after the exhibition. But since it was a mass-produced factory item – a “readymade” or “found object” (objet trouvé) as Duchamp dubbed it – he felt no artistic problem scandalously replacing it with an identical piece of plumbing or indeed, as its reputation and market demand arose, with supplying subsequent limited editions (or “replicas”) of it. One of these was sold at auction 20 years ago for more than $2 million.

The style of urinal selected by Duchamp (or whoever actually chose it) was a compellingly modern piece of design with sleekly functionalist geometric form. Its hygienic streamlining could almost be described as utopian. By being turned it on its side and remaining unconnected to the sewerage system, it appallingly loses this utility but acquires an alternate aesthetic merit.

It resembles a decorative if empty niche, suitable for a religious offering or as a stand for an idol. It also could even look like an idol. The French poet Apollinaire cheekily called it “a seated Buddha”. It’s also not hard to see it as a Cubist abstraction of a human torso, with that open protruding “spout” at the base being ambiguously either a penis or vulva in the way Picasso might render the fusion and copulation of sexual organs, inspired by tribal central African sculpture. It could be a weird, phantasmic classical Venus or Bacchus, or both simultaneously. Then again, that opening could be a pouting mouth, if one sees the triangular shape as a mask or droll caricature of a jowly face. These superimposed images flicker like optical illusions or even hallucinations, repressing as they also reveal the outrageous, comically obscene substance of this object. Remember that this object is, after all, a piss-take.

Fountain has had a liberating but also noxious significance in art, notably with the commerce aesthetics of Andy Warhol’s cool celebratory annexation of media imagery and in the cynically naïve conversion of domestic appliances, like vacuum cleaners on pedestals in vitrines, into luxury artefacts by Jeff Koons.

One could even consider the entire project of postmodernist appropriation, as well as the exhilaratingly punk insolence of work from some of the Young British Artist generation – such as Tracey Emin’s My Bed – to be among Fountain’s legacies. When the Chinese iconoclasts Yuan Chai and Jian Jun Xi tried to actually piss into one of the authorised replicas at the Tate Modern in London (it was protected by a Perspex box) they missed the joke, even if it might have been meant as an act of homage. One of the smarter if delightfully pugnacious descendants of Fountain was the grunge wave of Australian art in the early 1990s, such as a toothpaste-coated taxidermed cat retrieved by Adam Cullen from a dumpster or Hany Armanious’ recycled trash (including, notoriously, framed underwear in which he had shat himself).

But perhaps a work that takes us precariously and disturbingly furthest into the conceptual as well as aesthetic erosion and conversion of value inaugurated by Fountain would be the tragically dimensioned objet trouvé called Barca Nostra (Our Boat), parked on a quayside of the Arsenale (the old Venetian shipbuilding dockyards) alongside sunny al fresco bars and cafes at the current Venice Biennale. The rusted, gouged and haunted wreck of a fishing boat dredged up from the Mediterranean seabed off the Libyan coast, a vessel meant to accommodate a crew of 15, was the mass grave of a still undetermined number (between 700 and 1,100) drowned refugees when it sank in 2015 en route to Italy. Alternately praised for inciting argument with Italy’s closed border and condemned as crass exploitation of the refugee crisis, Barca Nostra has a troubling feature shared with Fountain: a vertiginous dispute over provenance. The artist Christoph Büchel only arranged for its installation in Venice, but no single individual or agency actually owns or has authored this work. In this case, its responsibility is everyone’s to own up to; but like an obscene piece of hard rubbish or roadkill left by the roadside, no one really wants to touch it.

March 25, 2021
Getting to the place where you’re on good terms with contemporary art involved a journey sometimes you forget you took. The stopovers along the way were a series of realisations. Let’s revisit them.
END_OF_DOCUMENT_TOKEN_TO_BE_REPLACED
https://artcollector.net.au/wp-content/uploads/2021/03/realisation-2-not-what-im-looking-at-is-a-rep-of-all-contemp-art-copy.jpg 1000 1000 MaddyMatheson https://artcollector.net.au/wp-content/uploads/2021/04/AC_logo_2.png MaddyMatheson2021-03-25 15:31:162021-03-25 15:31:16Cultural Capital: And Then I Realised…

Behind the Scenes: Social Snobs
Scroll to top