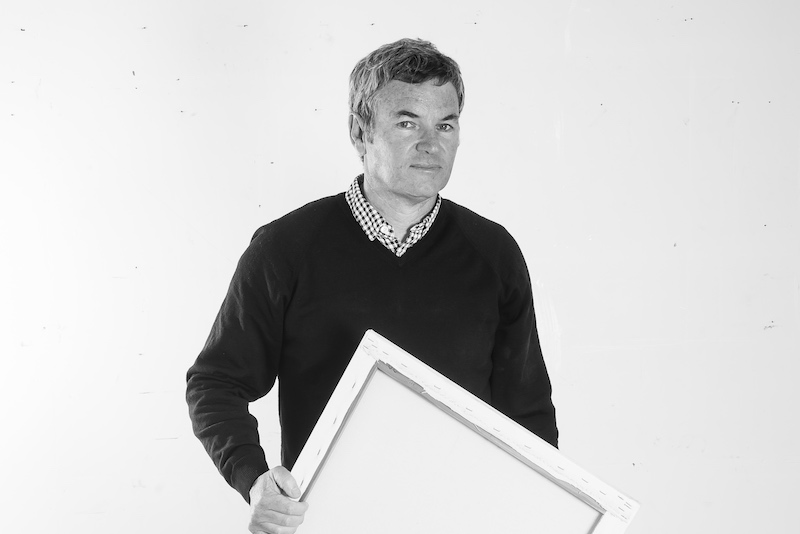 James Cousins: The Structure of Existence

James Cousins is a painter fascinated by structure: the structure of a good painting and the structure of truths. Louise Martin-Chew takes a look at the work of the New Zealand artist ahead of an exhibition of his new work in Brisbane.

For conceptual painter James Cousins, spending five years in London in the 1990s, after graduating from the University of Canterbury in Christchurch, was formative. “At that time the Frieze show had begun and Damien Hirst, Tracy Emin and the other young British artists were bursting onto the scene. Charles Saatchi had an experimental space where I saw major artists from the United States. And there was a lot of conceptually-based sculpture, which reminded me that I needed to think carefully about a conceptual approach to painting.” His early training had, “rigor, and we learnt how to look at things”. The influence of this structured and formal study is now visible in the highly crafted forms that Cousins’s mature paintings have taken.

After returning to New Zealand, Cousins continued his study, graduating with a Master of Fine Arts from Elam School of Fine Arts in Auckland, where he now teaches. Working toward his third solo exhibition for Brisbane’s Ryan Renshaw Gallery, he continues his investigations into postmodern painting, tracing the trajectory from a realist starting point into an image that reads as an abstracted and fragmented yet highly unified picture.

When Cousins spoke to Art Collector, he had just returned from five weeks of research, viewing exhibitions at the Biennale of Sydney, then London, Berlin, New York, Los Angeles and Chicago. He saw Matisse cutouts in London and an immersive exhibition by Sigmar Polke, Chris Wool and others. In these experiences, he was examining “the making, the decision-making processes of these artists. It is the great opportunity in spending time with the works of art – one that you can’t get from a book.”

His own approach to picture making reflects this interest in structure. “I am interested in paint and painting in a way that is cognisant of its history. Within my practice I introduce a series of limitations that allow for the examination of postmodern ideas about painting, in an open and pluralistic sense.” His body of work is a continuum, and the new works for Australia extend from those seen at Gow Langsford Gallery in Auckland in 2013.

“These works are continuing in their extension of certain processes and approaches. I use a mechanical process and spray guns, so that the gesture of the hand is not evident in the work. Increasingly it is the mechanical gesture that I use to play off against the contrast of the gesture created by the hand.”

Many of the recent works begin with a figurative image, taken from a photograph, from which Cousins paints a flower or organic form. These images are often drawn from pictorial reference books, themselves second hand and outdated. Cousins is interested in pursuing the notion of veracity and truth in historical references from the relatively recent past that have been superseded by new truths, currently seen as just as immutable.

Over this Cousins creates multiple layers with vinyl stencils. These are produced by a computer- driven vinyl cutting machine, laid over the painted surface and then over-painted, before the remaining stencil is peeled away. There is as much unmaking as making in these works, and the layers are visible when the canvases are viewed closely from the side. In this way the process is rendered transparent to the viewer. Cousins explains: “I like to allow the history of the work to inform its viewing nuances.”

“I am interested in making work that is difficult to pin down visually. I like to extend the idea of work that is constantly changing. It is my ambition that every time you see the painting, you see something you haven’t before.” As such, these are aesthetic exercises with a compulsive viewing pleasure attached. In Untitled, a new 2014 work, the underlying organic shapes float with a presence that contrasts, complements and competes with the geometry that lies above.

The unique development for the Ryan Renshaw exhibition includes works on a larger scale, and the variation in size alters the way we might approach them. At the time of writing, Cousins had 12 works in progress in his studio, from which he will select seven or eight completed paintings to journey to Australia. “I work in batches, and at a very fundamental level the decisions made in each work inform each other.” Equally, he plans to leave at least a couple of works in the studio, not quite finished. “I don’t like to be left with nothing – it can be hard to start the conversation again.”

James Cousins’s Twofoldness is at Ryan Renshaw Gallery in Brisbane from 23 July to 23 August 2014.

James Cousins is having his third Australian show with Ryan Renshaw Gallery in 2014. While the first two exhibitions were critically and commercially successful, Danielle Renshaw suggests that it is so often the third exhibition that tends to clinch the relationship between an international artist and the Australian audience.

“James Cousins is engaged in a discussion about the very history of painting. He eloquently collapses these histories into single complex works that layer figuration beneath abstraction. It is where these histories collide that is the core of Cousins’ interests.”

She notes that, like most successful artworks, the conceptual rigor operates in harmony with a highly refined aesthetic. “You don’t necessarily have to possess a deep understanding of the conceptual aspects of a Cousins painting for it to seduce you. I find his paintings consistently speak to me. Every time I see a painting my experience of it changes as new discoveries within the layers of the works reveal themselves.”

While each has a strong individual voice, she notes: “As a body of work they have an intellect I’m attracted to.” Renshaw adds: “The combination of various modes of painting within a single piece creates endless dialogues.” Interestingly, the paintings appear more abstracted in actuality than in reproduction – somehow their digitisation emphasises the discrete layers in a way the actual painting resists.

For Auckland Art Gallery curator Natasha Conland, the paintings that James Cousins so painstakingly constructs reflect “the immediacy of the artist’s relationship with the medium”.

She adds: “There are so many layers of his relationship with painting represented on the canvas that this field grows in complexity and forces us to see it as more than surface, more than image, but something of a conversation with painting itself.” Yet the work retains currency in its relationship with a digital world. There is precision and artificiality presented through his process, making it specifically of our own time.

In recent years she has observed his work develop, such that it has become harder to differentiate his source material. “The work appears to create oppositions – of nature and culture if you like – but uses all matter in a hyperbolic lattice. He has also transitioned away from a gridded structure towards a platform that interweaves foreground and background – or application and ground – into a mobile field. There is increased fluidity to the surface which has been beneficial in creating an energy to its exchanges and transitions.”

His relationship with his audience requires engagement, as she suggested, given that his processes “elicit curiosity and questioning from the viewer in a very fundamental way. The paintings ask us to dig deeper as a viewer, to use our visual intelligence to work out what is going on – from the surface to the painterly decision making.” They display a competency that beguiles the viewer. Conland suggests: “We are pleasantly wowed that painting can still achieve a level of mastery while being flummoxed by its language”.

March 31, 2022
Blood sculptures that melt in the warm air on opening night, chewing gum soldiers that visitors tread across the gallery floor and jaffas that melt into hair gel are all exchanges of substances that are part of the process in Tim Silver’s artworks. To Edward Colless they form a poetic theme of sickening, contaminating love like the kiss of a vampire.
END_OF_DOCUMENT_TOKEN_TO_BE_REPLACED
https://artcollector.net.au/wp-content/uploads/2022/03/Tim_Silver-1_1-800q.jpg 531 531 AdrianaBorsey https://artcollector.net.au/wp-content/uploads/2021/11/Art-Collector-logos-transparency-WHITE-1080x1080px-2.png AdrianaBorsey2022-03-31 15:44:352022-03-31 15:44:35Artist Profile: Tim Silver

March 31, 2022
Makinti Napanangka, now over 70 years old, paints on the ground in the open air hunched over her canvas, her brushstrokes confident and instinctive. The efforts of her day’s work are eagerly sought by institutions and collectors all over the world. Jennifer Isaacs visited this prominent desert painter’s remote home base at Kintore, to watch her work.
END_OF_DOCUMENT_TOKEN_TO_BE_REPLACED
https://artcollector.net.au/wp-content/uploads/2022/03/Makinti2-800-sq.jpg 545 545 AdrianaBorsey https://artcollector.net.au/wp-content/uploads/2021/11/Art-Collector-logos-transparency-WHITE-1080x1080px-2.png AdrianaBorsey2022-03-31 15:25:222022-03-31 15:25:22Artist Profile: Makinti Napanangka