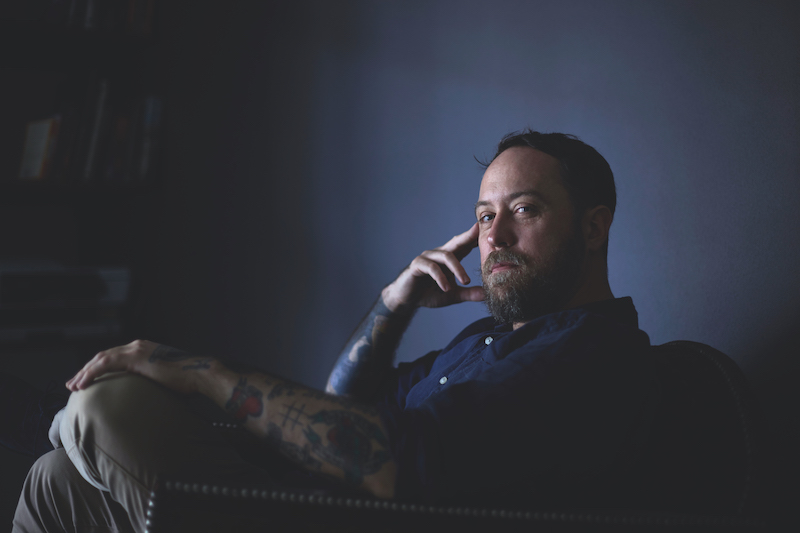 While his early life was entwined wih tattooing, Leslie Rice is moving on.

There is an exciting overlap between the act of tattooing and that of drawing, painting and printmaking. Similar overlaps exist, say, between dance and performance art, or land art and ecology. Leslie Rice proudly occupies the first category, running two tattoo parlours in Sydney, and winning two Moran portrait prizes. Some artists have brought the two activities even closer together: eX de Medici, based in Canberra; Wim Delvoye at Mona, with his living artwork Tattooed Tim, whose skin will eventually be flayed and exhibited upon his passing to the great tattoo parlour in the sky. Another artist, Santiago Sierra tattooed six unemployed men for the minimum wage of 30 dollars per line for his work 250cm Line Tattoed on 6 Paid People.

Rice prefers to keep his two passions separate, and as he said in an interview last year “I think I’m pretty much finished with tattooing, in all honesty. I grew up with it – my dad has been at it since the late 1950s, and I will always love tattoos, but the tattoo industry has become a strange and pale imitation of the business I fell in love with.”

So what can visitors to Sophie Gannon Gallery expect to see when his next show opens in Melbourne in September? For someone who paints dark, some would say gruesome, canvases (often painted on black velvet) it was perhaps sadly fitting that when I texted him some questions for further discussion, he texted back from a funeral he was attending.  But there are big changes happening within his pictorial language. When we get to speak, he tells me, “The show at Sophie’s is called ‘Tragic/Plastic’, and includes something new I’ve been working on for some time – fresco paintings. They are a stark white contrast to the gloomy black paintings, but continue the game in terms of playing with the registers of the craft. The title comes from an essay by Piet Mondrian, in which he describes art from before the 20th century as drawing on the ‘tragic’, where he saw the new art drawing more on the ‘plastic’, as in the formal relationships within the work itself. The white works draw on the tenets of colour field painting and it’s almost puritanical pursuit of flatness, and fascination with grids and square formats.”

But he is not over with “dark things”, which he admits he likes. He plays games with light and shadow, and he’s attracted to the big themes of sex and death, tipping his cap in the direction of Ribera and Rubens. Family and friends model for him, and he was first introduced to velvet as a painting ground when his father brought back a velvet painting from a business trip to Tijuana. “I’m still excited about making these dark works on velvet, so I’ll continue to dream them up. As I’m sure you’re aware, they reference paintings from the so-called ‘Golden Age’ of the medium, drawing inspiration from classical and religious subject matter, although the narratives are these days tending toward the more domestic and secular, while still dealing with the tragic.” There will be black works in the upcoming show,” he reveals, “which do draw on the tragic. There will be more organic, objective, pictorial subject matter, whose dark surfaces yield to another kind of pictorial depth.

And there will also be the introduction of influences from his private collection of 3D comic books that he collected in his childhood.

“In these works, geometric forms are doubled up and separated, as in stereoscopic anaglyphs. They are the most flat paintings that can be produced, as fresco has no physical surface whatsoever, with an unrealised (and unrealisable) potential for incredible spacial depth. Without the requisite 3D glasses, the images are destined to remain flat separations of cyan and orange.”

It is the subtlety of tonal range in Rice’s work that first takes you by surprise. Your eyes have to grow accustomed to the darkness, like the cruciform shapes in an Ad Reinhardt painting. To magnify this effect, Rice often places his paintings under pigmented glass, making the viewer feel they are looking into the indistinct space of a hologram. By contrast, I still have to experience the whiteness of the frescoes. I’m looking forward to it.

March 31, 2022
Blood sculptures that melt in the warm air on opening night, chewing gum soldiers that visitors tread across the gallery floor and jaffas that melt into hair gel are all exchanges of substances that are part of the process in Tim Silver’s artworks. To Edward Colless they form a poetic theme of sickening, contaminating love like the kiss of a vampire.
END_OF_DOCUMENT_TOKEN_TO_BE_REPLACED
https://artcollector.net.au/wp-content/uploads/2022/03/Tim_Silver-1_1-800q.jpg 531 531 AdrianaBorsey https://artcollector.net.au/wp-content/uploads/2021/11/Art-Collector-logos-transparency-WHITE-1080x1080px-2.png AdrianaBorsey2022-03-31 15:44:352022-03-31 15:44:35Artist Profile: Tim Silver

March 31, 2022
Makinti Napanangka, now over 70 years old, paints on the ground in the open air hunched over her canvas, her brushstrokes confident and instinctive. The efforts of her day’s work are eagerly sought by institutions and collectors all over the world. Jennifer Isaacs visited this prominent desert painter’s remote home base at Kintore, to watch her work.
END_OF_DOCUMENT_TOKEN_TO_BE_REPLACED
https://artcollector.net.au/wp-content/uploads/2022/03/Makinti2-800-sq.jpg 545 545 AdrianaBorsey https://artcollector.net.au/wp-content/uploads/2021/11/Art-Collector-logos-transparency-WHITE-1080x1080px-2.png AdrianaBorsey2022-03-31 15:25:222022-03-31 15:25:22Artist Profile: Makinti Napanangka